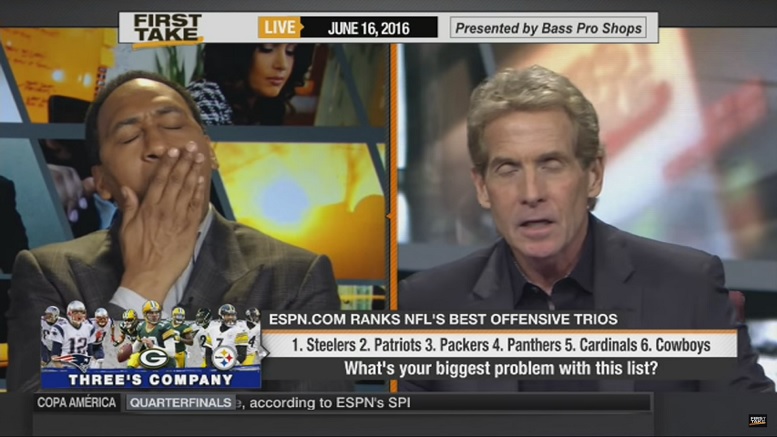 Bayless, a well-known fan of the Dallas Cowboys, believes Tony Romo, Dez Bryant and rookie Ezekiel Elliott should be ranked as the best offensive trio currently in the league. He did, however, justify that choice with a ton of ifs.

“I’m about to if you to death because it applies to this list,” Bayless explained to Smith. “Obviously, if Tony Romo is healthy for 16 games this year, Dez Bryant is healthy for 16 games and God bless Zeke the Freak, if Ezekiel Elliott stays healthy as a rookie for 16 games, I have no doubt that my “Cowgirls”, as Molly [Qerim] calls them, will have the best big-three in all of football.”

Smith wasn’t impressed with Bayless’ argument one bit and even less impressed with it when his co-host brought the quality of the Cowboys offensive line into the discussion to defend him thinking that Elliot would be more productive than Bell in 2016.

While Smith never said specifically whether or not he would have the Steelers trio of Roethlisberger, Brown and Bell ranked first overall, by all appearances Thursday morning he does and he definitely has them ranked higher than Romo, Bryant and Elliot.

After watching the segment, Brown took to Twitter to deliver his thoughts on why he thinks Bayless ranked the Cowboys trio over the Steelers ‘Killer Bs’ and he believes Bell’s recent dissing of Bayless in his latest rap single may have something to do with it.

You really think @RealSkipBayless was going to say @_BigBen7, @L_Bell26, and I are the best NFL trio after Bell dissed him on #rubberbandz ?

Later in the discussion between Bayless and Smith the former decided to double-down and bet that Elliot would wind up registering more combined yards than Bell will in 2016. Bell should definitely make a mental note of that for a future song after the 2016 season is over.

If you are interested in watching the entire segment from this morning I have included it for you below.