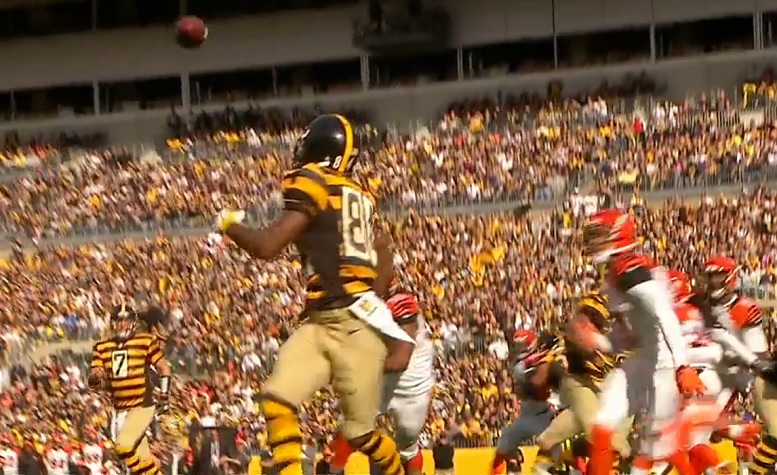 We’ve written about Antonio Brown’s close friendship with Shakim Phillips. And how he caught passes with Eli Rogers in his driveway. Now, Brown is spending extra time working with 7th round pick Demarcus Ayers.

“I’m actually about to go to his house right now and get some extra work in,” he told Teresa Varley in an interview on Steelers.com, following the team’s practice yesterday.

Ayers expanded on what it’s like to see Brown’s work ethic up close.

“He’s a very special guy. Very humble. He just loves guys who like to work. He has a positive vibe when he steps in the meeting rooms with us and out here in OTAs. We love him. I love him. We love to be around him every single day.”

Brown certainly has the reputation as one of the hardest workers on the team, influenced by the football-field size chip on his shoulder, counted out because of his college, size, and speed. Even during his time on Dancing With The Stars, Brown made sure to get in near-daily football workouts, keeping himself in football shape for his return to OTAs last week.

He has some of that “diva” in him like every receiver but Brown’s case is as mild as you’ll see in a young, star receiver. As we mentioned on today’s The Terrible Podcast, his interview with ESPN made it almost certain that he has no intention of holding out or causing an issue with his contract. And he readily shares his work ethic with his teammates, feeding off each other, and as Ayers tells it, just wants to surround himself with people who share similar values.

Brown had no ego in even his introduction to Ayers, reaching out to him before first. Which is good because as Ayers tells it, it was a little intimidating trying to walk up to the best receiver in football.

“When I first saw him in the meeting room, I was actually a little nervous to say something to him. But he introduced himself, he remembered my face from Twitter. Him opening up to me first and me not having to say anything to him just shows the type of guy he is.”

That’s a classy approach to someone who is clearly gunning for his returning job. And why you’ll be hard pressed to find another player and person like Brown for quite some time.