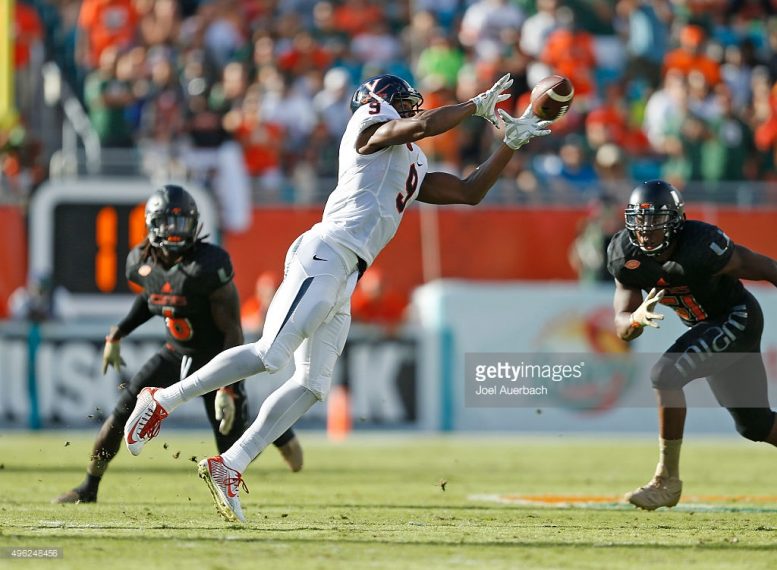 There is a still quite a bit of buzz ongoing about former Virginia wide receiver Canaan Severin, who signed with the Pittsburgh Steelers as an undrafted free agent, and with the start of the team’s OTA practices about to get underway next week, I finally have cleared enough time to go back and review his tape from the 2015 season.

I have compiled the eight touchdowns that Severin scored last season for you in the video below and as you will clearly see, most of them were of the explosive play variety in that they covered 20 yards or more.

While that is very impressive, a little research reveals that of Severin’s 54 total receptions last season at Virginia, 13 of them were explosive plays.

So, why didn’t Severin get drafted? For starters, the fact that he was unable to participate at his pro day because of a hamstring injury probably didn’t help his cause. Additionally, while he certainly doesn’t show blazing speed on film, he still managed to catch 67.5% of all passes thrown his direction last season and as far as I can tell, he only had one drop, which came in the game against North Carolina.

While Severin did register his share of explosive plays last season, STATS has him down as only averaging 2.3 yards after the catch in 2015 and that certainly isn’t great. Here is one other interesting tidbit for you related to Severin. According to STATS, he only played 54% of Virginia’s offensive snaps last season.

Severin will be battling for a fifth wide receiver spot throughout the rest of the offseason and being as doesn’t appear to be much of an asset when it comes to special teams play, he really has a tough road ahead of him. With that said, he should have a legitimate shot at making the Steelers practice squad out of training camp.