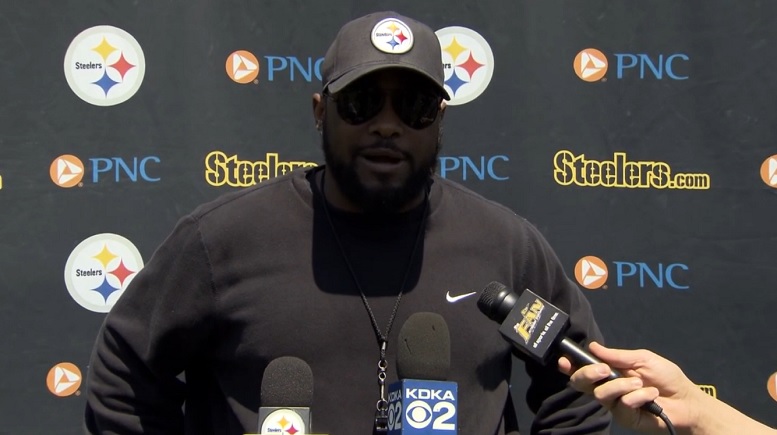 The Pittsburgh Steelers have now wrapped up day-two of their annual rookie mini-camp and even though all that’s taking place is football in shorts, head coach Mike Tomlin identified on Saturday how it is that players can go about making good impressions over the course of the weekend.

“We can evaluate their overall pedigree,” said Tomlin. “And by that I mean how they move, the manner in which they move, the manner in which they control their body. Those are some things you can’t coach and those are obviously things we value. That shows up in drill work, it shows up even in this setting, in the controlled setting that we’re in right now. Those God-given things usually show up, and that’s what we’re looking for.”

In addition to the Steelers seven draft picks and 10 undrafted free agents the team signed since last Saturday, the rookie mini-camp roster is mostly made up of tryout players who have one shot to make a quick impression on the coaching staff. Even if a player isn’t signed to the team’s 90-man roster at the conclusion of this weekend, they could potentially receive a call later on in the summer should injuries take place during training camp.

Tomlin was later asked to explain what is is he might tell the players at the conclusion of the weekend that might better prepare them for the team’s OTA sessions.

“I really don’t talk too much about what lies ahead,” said Tomlin. “I mean, let’s be honest, it’s going to be new and different for them. There’s not much I can say that’s going to make them comfortable, or the journey that much easier. More than anything, it’s important that we review what’s transpired here so they learn from the things that they’ve done. So hopefully the unforeseen is a little bit smoother because of that.”