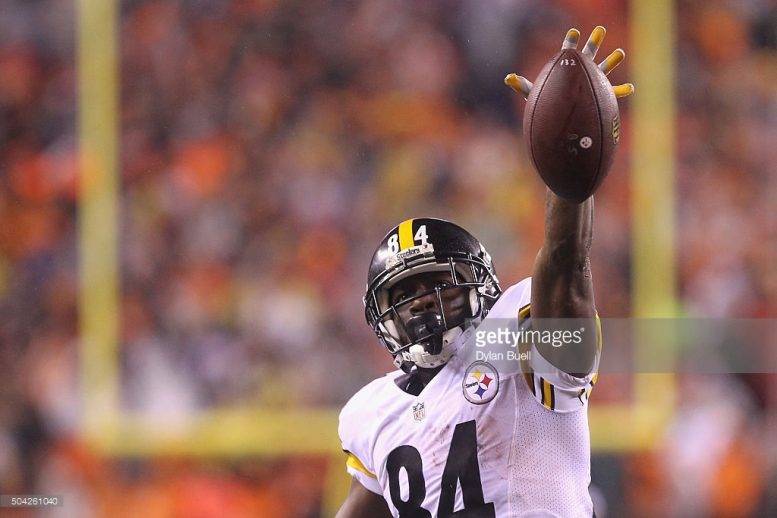 You don’t need to be a rocket surgeon to know that Pittsburgh Steelers wide receiver Antonio Brown is severely underpaid as he heads into the 2016 season. Additionally, you should already know by now that the organization is unlikely to give him a contract extension until after the 2016 season is over as general manager Kevin Colbert has made that clear several times already dating back to last offseason. With all of that said, the Steelers could give Brown more money this year to at least make his earnings look respectable without raising his 2016 cap charge.

Last offseason, the Steelers gave Brown $2 million of his 2016 scheduled base salary as part of a contract restructure and we could see something similar done this offseason. With that said, I’m sure Brown would like to earn more than $8.25 million in 2016 as he certainly has proven to be worth it.

Being as Brown is currently scheduled to earn base salaries of $6.25 million and $8.71 million in 2016 and 2017 respectively, the Steelers could feasibly pay their top wide receiver $5 million of his 2017 money now as part of another contract restructure if they have plans to sign him to another long-term extension next year. In other words, Brown would earn $11.25 million in 2016 and while he would still be very underpaid, at least he would then be inside the top 10 league-wide for wide receivers for the 2016 season.

As you can see in the two tables below, Brown’s cap charge in 2016 would actually decrease by $125,000 should the Steelers decide to pay him forward $5 million from 2017 as part of a signing bonus that would also include $5.25 million of his 2016 scheduled base salary. Additionally, Brown’s currently scheduled cap charge in 2017 would only increase by $125,000 should these exact amounts be used.

Now, in doing a restructure like I just laid out, Brown would have $9,545,834 in prorated bonus money that will go against the team’s 2017 salary cap number and the remaining $3.71 million owed to him on his old contract would likely be rolled into a new long-term extension next year.

There is another restructure option the Steelers could use if they wanted to pay brown forward $5 million from 2017 if they don’t mind his 2016 cap charge increasing $2.5 million. They would basically pay Brown $5 million of his 2017 base salary as a bonus this year and prorate it out over 2016 and 2017. Such a restructure would result in Brown’s 2017 cap charge decreasing by $2.5 million. now, being as the Steelers are already low on cap space this year, they would only be able to restructure that way after they clear additional cap room which could be done by signing guard David DeCastro or linebacker Lawrence Timmons to extensions. While thers no guarantee Timmons will get done this offseason, DeCastro certainly will have a new deal in place by the start of the 2016 regular season.

Let’s assume that Brown has another spectacular season in 2016 and wants to be the highest paid at his position heading into 2017. As we sit here right now, that new money yearly average would need to be roughly $15.5 million and that would result in a four-year extension worth roughly $65.71 million as he will expect the total amount of all five years to include the remaining $3.71 million owed to him from his old contract. Those negotiations will be interesting to watch take place as far as total amount of guaranteed money and the structure goes and especially if the team forced another $5.125 million in prorated money into 2017 this year.

Now, while the first restructure above looks great on paper as far as getting Brown more money in 2016, without really affecting his cap charges in 2016 and 2017, I’m not so sure the Steelers will go that route as that new prorated amount of $9,545,834 in 2017 sure looks more daunting than the second proposal. So with that, here’s another scenario to consider based similarly on what transpired last offseason.

In this option below, Brown would receive $3 million of his 2017 money this year and that would be rolled into a signing bonus along with $2 million of what he is due in 2016. This would result in Brown earning $9.25 million in 2016 with his salary cap charge only increasing by $500,000. Such a restructure would ultimately decrease his scheduled 2017 cap charge by $500,000. Lost in those numbers, however, is the fact that $2.5 million is still being pushed into Brown’s 2017 prorated column.

Being as the Steelers really shouldn’t need to do a restructure with Brown this year to clear additional cap space like they did last year, I would go with my second example if indeed the wide receiver had to have more money this season. Obviously, the best-case scenario would include nothing being done this year and Brown playing for his scheduled $6.25 million in 2016 with his goal being a new lucrative deal next year at this same time.

Even though I think the Steelers could ultimately do some sort of contract restructure with Brown in the coming weeks or months in order to give him more money this year, there’s no guarantee that they will do anything at all. Remember, they didn’t have to do anything last year. It certainly will be interesting to see how this all ultimately plays out. For what it’s worth, Brown is currently doing and saying all of the right things with the team’s OTA practices set to begin next week. By all appearances it doesn’t appear as though he will conduct any sort of holdout moving forward.