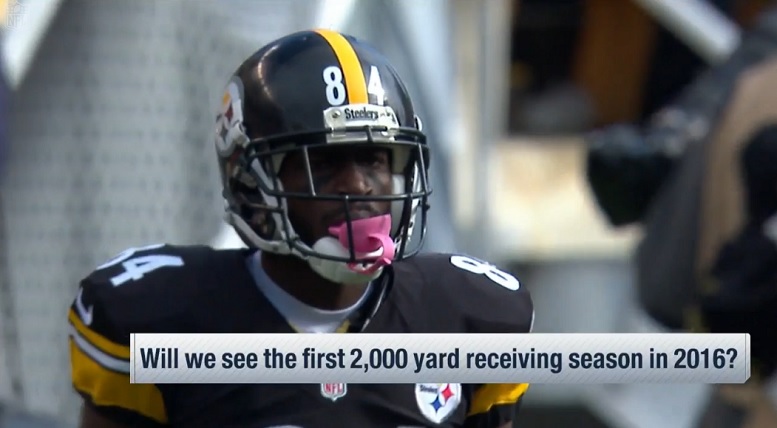 Will the NFL ever have a 2,000-yard receiver during a 16-game regular season? If that amazing feat is going to be accomplished in 2016 by a player, a few NFL Network analysts, who just so happen to be former players, believe Pittsburgh Steelers wide receiver Antonio Brown has the best shot at doing it.

“If Big Ben is healthy this year for a 16-game span, which if you’re pacing 16 games last year, Antonio Brown would have broke the 2000-yard mark by far,” said NFL Media analyst Willie McGinest this week. “Touchdowns, and you talk about receptions, would have had over 159. And it’s the route running, it’s the different ways that they put him against different defenders. And I know Martavis Bryant isn’t going to be there, but it doesn’t really matter. This guy, pound for pound, is the best player in the NFL.”

Even though Brown recorded 1,834 reception yards last season on 136 catches, McGinest and fellow analyst Heath Evans are both well aware of the fact that the Steelers wide receiver would have likely busted the 2,000-yard barrier had starting quarterback Ben Roethlisberger not missed four games due to a left knee injury. In fact, in the first three games that Roethlisberger missed last year, Brown only caught 11 passes for 111 yards on 23 total targets while backups Mike Vick and Landry Jones both saw action at the quarterback position.

“AB is like this human joystick,” said Evans, who admitted the odds and law of averages are against Brown hitting the 2000-yard plateau in 2016. “And we’ve seen all of the different multiple coverage attempts to really try to stifle what he does with Big Ben. Those numbers drastically decreased when Ben wasn’t there those four games.”

In order for Brown to hit 2000 yards receiving in 2016 he would need to average 125 yards per game. That would obviously be very hard for Brown to do if Roethlisberger winds up missing any games due to injuries or if he or Brown are forced to sit out a game at the end of the season due to the Steelers having the top seed in the AFC locked-up ahead of the playoffs.

When recently retired wide receiver Calvin Johnson set the current single-season receiving yardage record of 1,964 back in 2012 with the Detroit Lions, he did so with only 122 total receptions. 40 of Johnson’s receptions that year went for 20 yards or more and equated to nearly 57% of his total yardage on the season.

Regardless of the odds being against him, Brown would obviously be the favorite to make NFL history in 2016 by becoming the league’s first 2000-yard receiver.