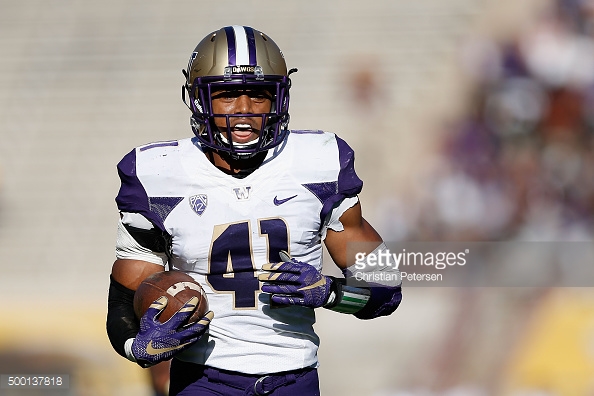 Immediately after the Pittsburgh Steelers drafted Travis Feeney in the sixth-round of the 2016 NFL Draft, several people, including myself, wondered if he will ultimately be asked to put on some weight being as the team views him as an outside linebacker in their defensive system.

Feeney, who registered 33 tackles for loss and 15.5 sacks during his college career at Washington, weighed 230-pounds at the 2016 NFL Scouting Combine and because of that, Steelers linebackers coach Joey Porter was asked Saturday evening what he envisions the young linebacker’s weight being in Pittsburgh.

“I don’t know what his walking around weight is,” said Porter. “I know what I like to play with, but at the same time, you have different players play at different weights. He’ll play at the weight suggested to him from the coaching staff and try to meet what makes him play at his best. I don’t want a guy that feels like he has to come in and pick up so much weight to play effectively. That’s not always the case. The way the game is spread out, speed is everything. I don’t want to do anything to hurt his wheels. I want him to be ready to play the way he knows how to play and the way he played at the University of Washington. If he can make that transition and give us the same type of intensity that he played with, he’ll be just fine with his weight.”

During a Monday interview on 710 ESPN Radio, Feeney was asked how much he weighs currently and he admitted he weighs less than he did in Indianapolis.

Feeney also admitted during the interview that he fully expected to be drafted on day-two but that he understands why he may have slipped to the sixth round.

“Yeah, I think a lot of it is everybody looked at my shoulders and was like, “Is he durable? Will he make it through?’ But it is what is, the injuries are injuries and I knew that was going to mark me off, but still, I never missed game,” Feeney said. “I mean I missed one game in my whole career and I still played through everything and I think my heart outweighs my injuries.”

It’s funny that Feeney should mention his heart as prior to the draft, Steelers general manager Kevin Colbert admitted that the organization is looking for players with characteristics that can’t be seen or measured when watching their tape.

“When we’ve missed on picks, it’s usually not a physical talent,” said Colbert last week. “We talk about hearts and smarts all the time and those have been the areas. If we trace ourselves back to where we’ve made mistakes, it’s been in those two areas. And they’re the two hardest areas to evaluate, because I can’t put a clock to it.”

As far as Feeney’s past shoulder injuries go that required him to undergo four different surgeries during his time at Washington, he said Monday he no longer believes they will hinder him moving forward. Additionally, he said he’s now been fully cleared to resume practicing after undergoing surgery to repair a sports hernia after he competed at the combine.

“Physically I’m good,” said Feeney. “Physically I’m cleared from my hernia surgery and ready to go. I’ve been running 90 to 100 percent a little bit. Ran 100 percent one time recently so that’s been really good. I felt pretty smooth and my groins feel good. My shoulder feels fine. No issues and I’ve just been rehabbing and getting ready to work.”

Feeney also knows that he comes to Pittsburgh needing to improve certain aspects of his game as well.

“I need to work on defeating the block before trying to make a play,” he said.

Being as Feeney graduated last in June of 2015 he won’t have to miss any of the team’s OTA practices even though some other draft picks out of Washington will because of the school utilizing the quarter system. It also sounds like he’ll be healthy enough to participate in the Steelers rookie minicamp that will take place in Pittsburgh this coming weekend and said that he looks forward to getting into town and learning the defensive playbook as soon as he can.

“It’s crazy to know that this opportunity is right here and the only man who can stop me is myself,” Feeney said.