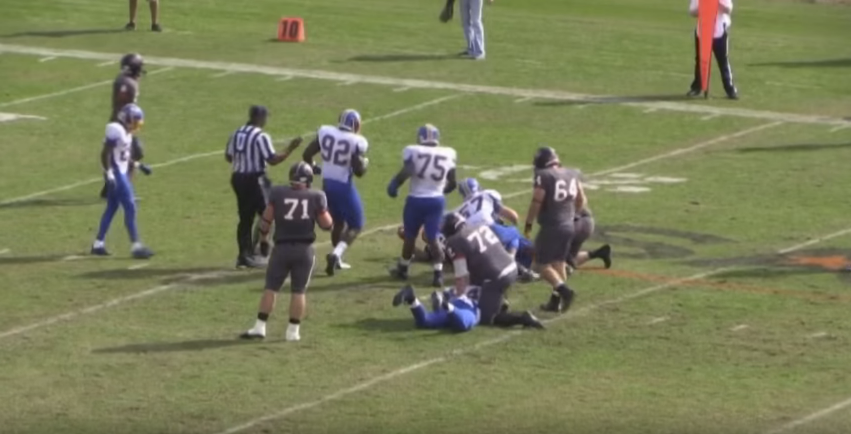 The Pittsburgh Steelers brought in ten UDFAs immediately after the draft. It’s been widely, and fairly, regarded as a ho-hum class without too many “names.” And the most unknown of the bunch was Mars Hill defensive end Johnny Maxey.

Mars Hill might sound like the title of a Sci-Fi B movie. But it’s a private school in the town of Mars Hill, North Carolina. A member of Division Two’s South Atlantic Conference, the school gained notoriety last season after Denzelle Good became a surprise 7th round selection of the Indianapolis Colts. Good wound up starting four games at right tackle.

Perhaps it was the attention Good received that helped create additional exposure for Maxey. But he certainly wasn’t drafted only on those laurels. Maxey played well last season, though the numbers are a little difficult to find. Click on his roster bio and, perhaps blame a lazy maintenance keeper, only three games appear.

That made him all the more mysterious. Who would bring in a player with three games, scant production from a school most people have never heard of?

Only Maxey played the entire season. And dominated. Look up the team stats from the season on the Mars Hill site, and you’ll see his real stat line. 11 games, 82 tackles, 7.5 tackles for loss, 3 sacks, and 3 fumble recoveries. A much more respectable line. It earned him second-team All-Conference Honors in the SAC.

He paid his way to attend the Regional Combine in New Orleans. Though a hamstring injury cut his session short, he was able to turn in a 4.9 40, according to this recap by LockerReport.com.

Though most of these reports speak well of players, there is little information on him available, so Locker Report’s potentially rose-colored recap will have to suffice. Here is what they had to say of the workout.

“Johnny Maxey Jr. of Mars Hill is massive and agile as he executed that attribute during his short shuttles. He demonstrated great footwork with the ability to get off the ball, he is surely a NFL star waiting to happen.”

“Star waiting to happen.” That is some mighty fine campaign work being done but that 4.9 time does suggest an above average athlete.

Two days after the workout in New Orleans, he attended Wake Forest’s Pro Day, measuring in at 6’4, 293 pounds. He jumped 27 inches in the vertical, 8’7 in the broad and put up 27 reps on the bar, though I bet the hamstring injury influenced his poor explosion numbers. But when you’re coming from such a small school, you can’t pass up any chance to get noticed.

Maxey survived his first weekend in the NFL, the rookie minicamp. We’re not going to even attempt to type up a scouting report on him, unless someone out there has gotten their hands on Mars Hill tape. We don’t even have a good photo for him, the one seen above from a coaches show, with #92 Maxey in the middle. I only found one game online, a 2014 contest in which Maxey did not play. But this might be the most detailed, centralized write-up available.

His chances for a spot on the 53 man roster are likely nill. But with the Steelers keeping at least one defensive linemen on their practice squad in five of the last six years, there should be at least a chance for him to compete with the likes of L.T. Walton and Caushaud Lyons and fellow UDFA Giorgio Newberry.