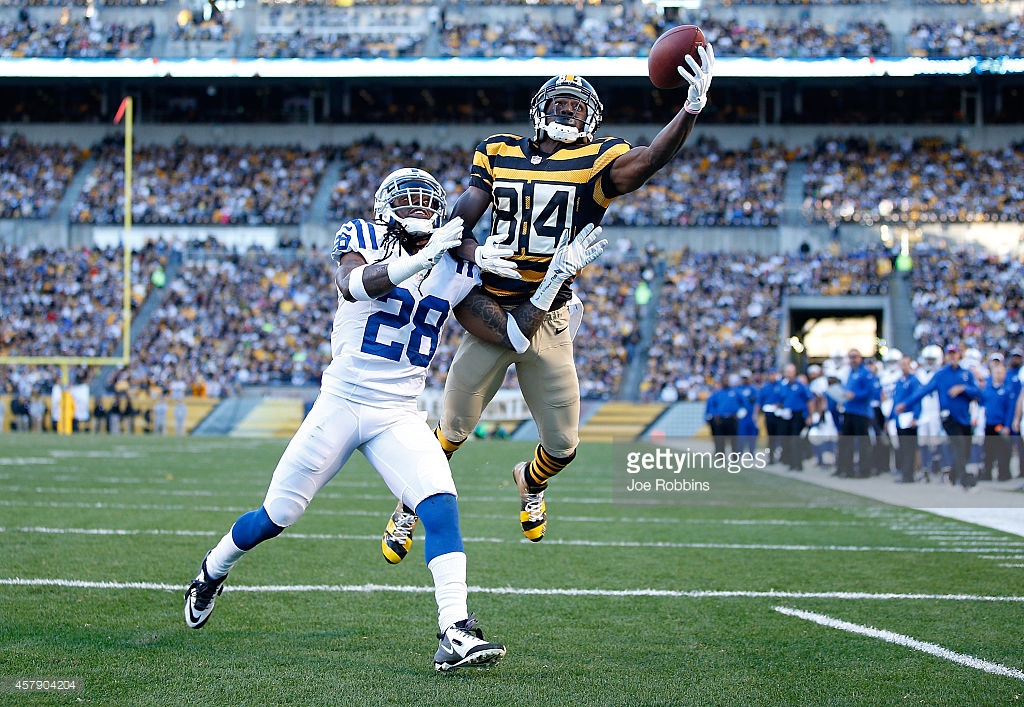 The Pittsburgh Steelers and General Manager Kevin Colbert are well aware of the sort of player that they are fortunate to have in wide receiver Antonio Brown originally a sixth-round draft pick in 2010 who has become arguably the best player at his position currently active in the league.

And they are, indeed, fortunate, when you consider the economic factors involved in his employment. When extension talks broke down between the front office and former Steelers wide receiver Mike Wallace in the summer of 2012, the team instead turned its focus to working out an extension for Brown, in a rare move, given that he was only in his second season. He was signed to a six-year extension, of which two years still remain on that deal.

And therein lay the intrigue, because we are still left wondering whether or not Brown will actually play the 2016 season without having his contract altered in some form or fashion. Non-quarterback players with more than a year left on their contracts are not historically in line for extension talks with the Steelers’ front office.

They did make an exception last year when they moved $2 million of his 2016 base salary into a bonus for the 2015 season, essentially giving him a $2 million raise for last year. But that also means that he is $2 million shy of what he would have been making this year, and it would be hard to imagine that that stays the same after his historically great season last year.

Colbert visited the Pro Football Talk set yesterday to discuss a variety of topics, among them being, unsurprisingly, the status of Brown, who, rather than briefly ‘holding out’ during the earliest phase of voluntary workouts last year, is actually participating in Dancing With the Stars at the moment.

The general manager spoke on that and whether he is concerned about the risk of injury, to which is response was, “I’d much rather worry about that than worry about the guys doing something off the field”. The Steelers have had their off-field issues in recent years, of course.

On the status of Brown’s contract, however, he more or less declined to give a straightforward answer, which is unsurprising, given the team’s loose policy of not discussing the contract statuses of their players, similar to how they do not discuss their draft board, or other teams’ draft selections.

He did say that Brown “has two years left and we expect that to be honored without any issue”, which frankly doesn’t say a whole lot, and certainly nothing that we didn’t already anticipate that he might say when posed such a question.

For what it’s worth, I still expect that by the end of training camp Brown’s contract will be altered in some form or fashion. I suppose it’s unlikely that he actually receives an extension, but he will probably receive another bonus in the form of accelerated salary from the final year of his contract.

Brown was originally scheduled to earn a 2016 base salary of $8.25 million the way it was originally structured, but is now set to earn $6.25 million this year because of last year’s movement. His full salary cap is $12,370,833 due to prior restructures, accounting for over $6 million in prorated money. He restructured his contract in 2013, 2014, and 2015.

For context, Brown’s 2016 base salary, in terms of cash spent for the year, ranks 22nd in the league. Eight players account for a cash spending in excess of $10 million this season. He is set to earn $8,710,000 in the final year of his deal. The front office can forward some of that money into 2016 and then work out a very lucrative extension with him next year.