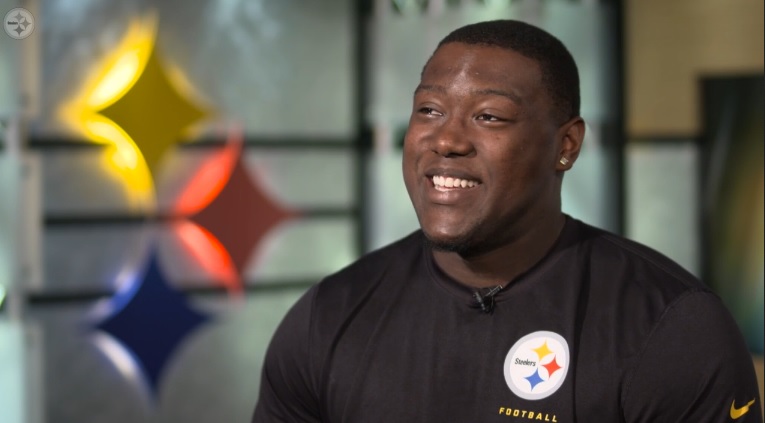 For a junior entering the NFL against the league’s advisement, you might get the impression Jerald Hawkins might regret his decision. But ask him about it and you won’t hear a twinge of that feeling. In face, he’s elated to call Pittsburgh home.

“I feel at home, honestly,” Hawkins told Steelers.com’s Missi Matthews, specifically responding to what it’s like working for Mike Munchak.

“Everything about the atmosphere around here. The strong fan base. They just love their football here. It felt like I was back at LSU, honestly.”

While Hawkins is unlikely to earn any sort of Sunday role in his rookie year, he’ll use his de facto senior season to get used to the NFL system. Hawkins told Matthews he’s glad to be versatile, playing left and right tackle at LSU, and didn’t have a preference of which side he likes playing.

In the league today, with great pass rushers on the left and right, the idea almost becomes irrelevant anyway.

Off the field, Hawkins said he enjoys being in the Steel City.

“I love Pittsburgh. Everyone around here is calm, football friendly. Everyone enjoys everyone.”

Though Pittsburgh did initially cut 4th round pick Doran Grant out of camp last season, it seems likely Hawkins will make the roster as the #4, and final, tackle. The internal competition is weak, especially after the release of Mike Adams, though I’m not sure that still would’ve been much of a battle.

Behind Hawkins sits just two tackles. Matt Feiler, who spent most of last season on the practice squad. And Brian Mihalik, making an Alejandro Villanueva-esque switch as a 6’9 former defensive linemen now flipping spots in the trenches. Both, if they even make the team, give the feel of practice squad players as opposed to real threats to the 53 man roster and Hawkins’ roster spot.