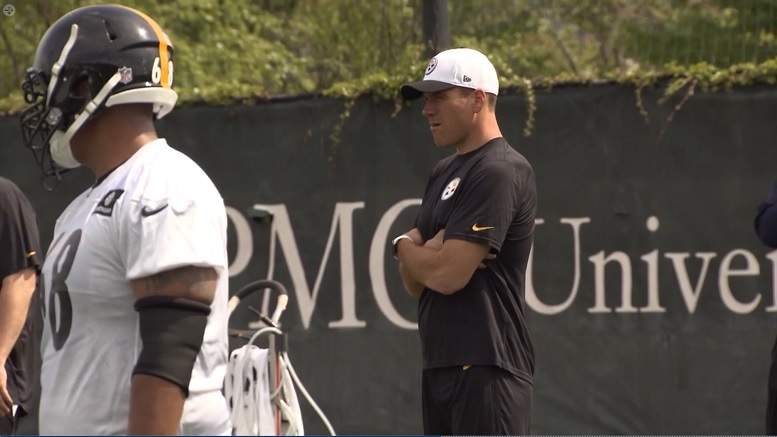 As the Pittsburgh Steelers wrap up their first set of OTA practices of the 2016 season, it’s still very exciting to know that former guard Alan Faneca is scheduled to remain with the team over the course of the next several weeks as a coaching intern.

While it’s certainly not rare for former Steelers players to try their hand at coaching during the team’s offseason practices, you can’t help but think that Faneca’s presence will help make several members of the offensive line even better. Additionally, he will give offensive line coach Mike Munchak yet another set of eyes to lean on during a time when the team’s roster is full of players who have yet to play a down in an NFL game.

Steelers veteran guard Ramon Foster certainly doesn’t take Faneca’s presence this year for granted and he talked glowingly about this year’s Hall of Fame finalist during a recent interview on steelers.com.

“Awesome, that’s a legend,” Foster said of Faneca. “We were messing with Dave [David DeCastro] that he was only here to coach him. So it’s awesome to have older alumni back. Alan’s one of those guys that’s a legend. Everybody knew about him when he wasn’t even here and to see him around is definitely impressive because he laid down a great body of work.”

Faneca certainly was impressive during the 10 seasons that he played in Pittsburgh that included him being named a first-team All-Pro six times. Faneca’s crowning moment in the NFL could quite possibly be the block that he made on the long touchdown run by former Steelers running back Willie Parker against the Seattle Seahawks in Super Bowl XL as it was a vintage pull and bury to the right side.

While Faneca no longer looks like an NFL guard due to all of the weight that he’s lost since retiring after 2010 season, there’s no way that he’s lost all of the knowledge of playing the position for 13 years in the league.

While veteran players such as Foster, Maurkice Pouncey and David DeCastro are sure to pick Faneca’s brain over the course of the next several weeks, I’m more excited about young players such as B.J. Finney and Jerald Hawkins being able to spend valuable time with the Steelers former guard.

It’s hard to know whether or not Faneca will continue to pursue a future in the NFL as a coach after his internship with the Steelers is over with, but if he does, one has to like his chances at succeeding in such a role due to him not only being a former player, but one of the all-time greats to play the game as well.