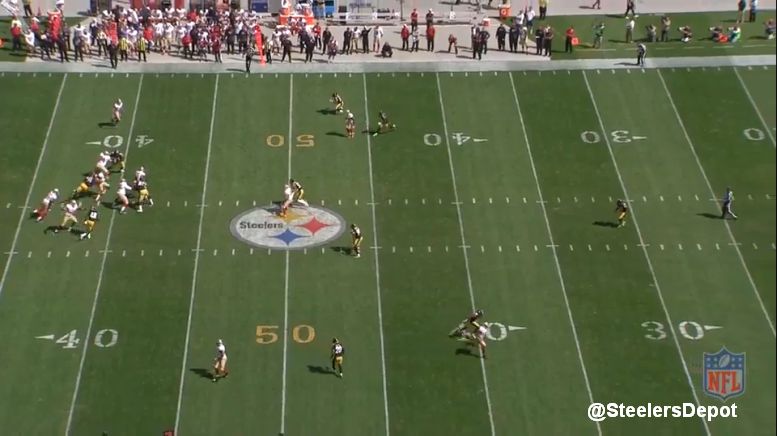 When you think of the Pittsburgh Steelers’ defense, you probably circle a couple of common concepts: tough, hard-hitting, stellar run defense, and a potent pass rush. That’s been a constant since the 1970s.

But the scheme wrapped around those core football values has evolved. Bud Carson’s Cover 2, a 4-3 front with a “crooked nose,” one-gapping their way to a dynasty. The switch to a 3-4, not installed by Dick LeBeau but definitely perfected, a two-gapping front three and a Cover 3 shell over the top with enough Fire Zones to keep offensive coordinators burning the midnight oil.

Much of the talk during this offseason has revolved around the idea of reverting back to those Cover 2 looks. And maybe it’s just because we’re in the dead part of the year, but you’ll see – and will probably keep seeing – the discussion of a switch to a 4-3.

I won’t discuss the merits of that here, though for the record, I don’t buy most of the hype. The point here is to maintain the importance – and usefulness – of what I would still call the staple of this Steelers’ defense. Their Cover 3. We already know their fire zones are based around the idea. Five man pressure with three over the top and three underneath. We’ve broken down the specific concepts many times and later in the offseason, we’ll review them.

Going through our 2015 charting, I went back and looked at the four man sacks Pittsburgh had last season. 20 in total. And at least nine of them were clear examples of the team’s simple yet effective Cover 3.

Let’s review the principles of Cover 3. Four man rush, three deep, four under look. The three in the back end play their third of the field. Underneath, you have a pair of players responsible for the curl/flat and two hook plays down the hashes. Up front, at its simplest, you’re looking for a balanced rush with contain principles to each side. Here’s a drawing. 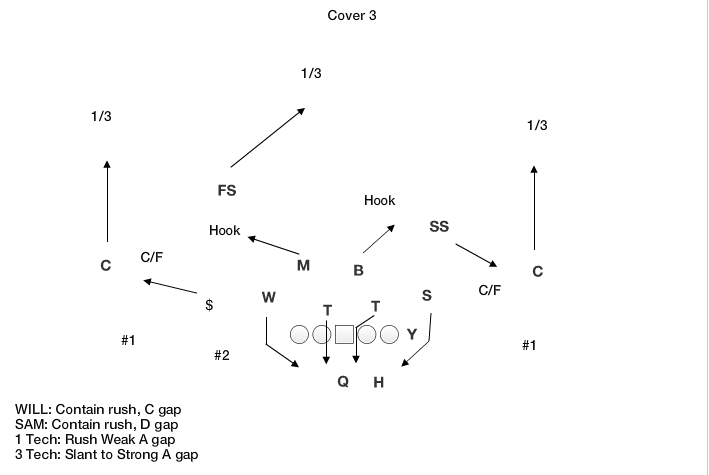 Here are the things I really like about the concept.

1. No obvious holes in coverage. Offers a lot of balance. Seven dropping that matches vertical threats with underneath ones.

2. Zone coverage. Eyes on the football. Better reaction to close on tackles or jump routes. Lets the whole defense rally to the football or prevent mobile QBs from breaking long runs. That’s the problem with man-to-man. Back to the ball, no one has vision on where the play’s going.

Let’s turn to the tape. Our first comes against the San Francisco 49ers in Week 2. A very simple look at it. Base 3-4 against the 49ers’ 12 personnel. Steelers’ single high look gives the appearance of Cover 3. 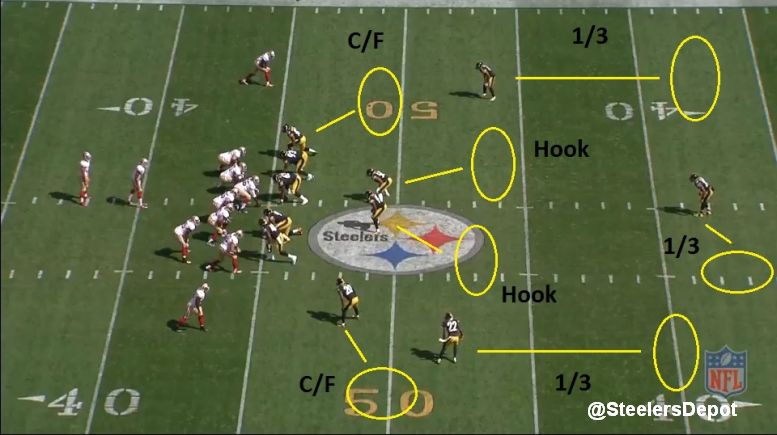 It’s a four man rush with ROLB James Harrison dropping into the right curl/flat The 49ers are basically running a Hank concept (curl/flat) with the #1 receiver to the bottom on a sight-adjustment, converting his route vertically with William Gay not giving much of a cushion.

Pittsburgh has everything taken away. Harrison’s drop eliminates the curl with eyes (again, zone coverage) to drive on anything in the flat. The curl/flat to the other side from Will Allen does the same to the flat and would’ve done the same to the curl, though again, the receiver extends his route vertically. The inside linebackers drop into their hook zones, taking away the TE curl underneath. Single high safety has eyes on the QB and will rally to the ball wherever it goes. 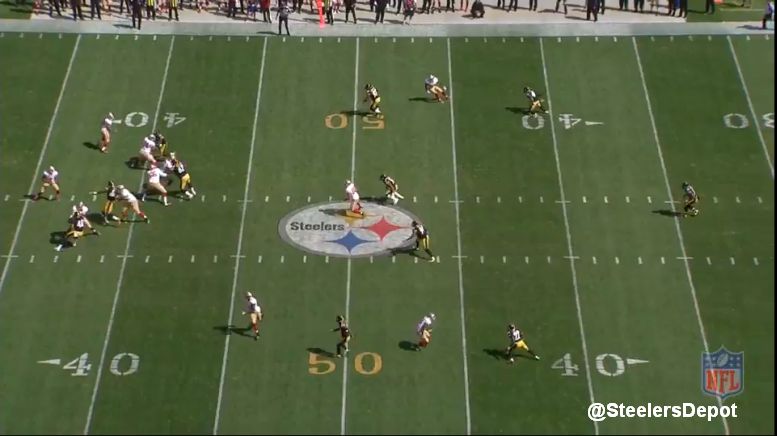 Let’s look at the rush since this play does end in a sack. We have a balanced rush, two players to each side of center, with again, Harrison dropping. It’s important to make sure the rush has contain principles, especially against a mobile threat like Colin Kaepernick. Cam Thomas scoops down a gap into the C while Bud Dupree is naturally doing the same to the other C gap. Daniel McCullers is double-teamed in the A gap while Stephon Tuitt is one-on-one in the B gap.

Here’s the end zone view with their rush responsibilities outlined. 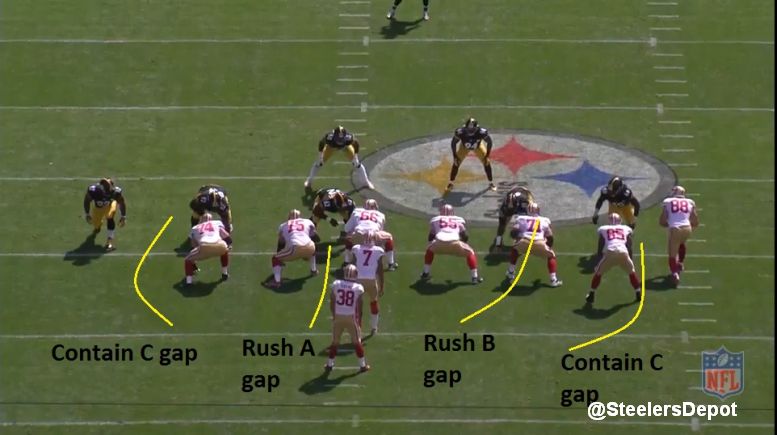 Tuitt beats the right guard one-on-one, getting the sack, but the marriage of coverage and rush principles creates the result. 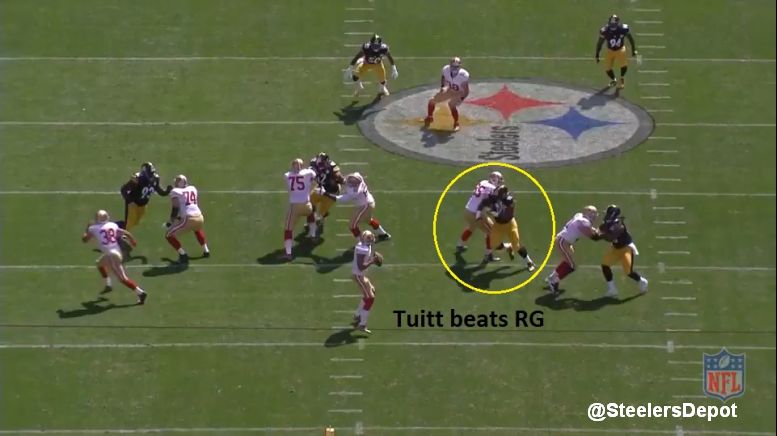 GIF of the play from the aerial view.

The next look comes in the following week versus the St. Louis Rams. Near identical situations lead to near identical calls. 2nd and 3 in the first quarter versus 12 personnel, just as it was in the first clip against San Francisco. Same call. Cover 3, three over and four under. Four man rush with contain principles, the RDE scooping down a gap to fill the void left by the ROLB, dropping into his curl/flat responsibility. 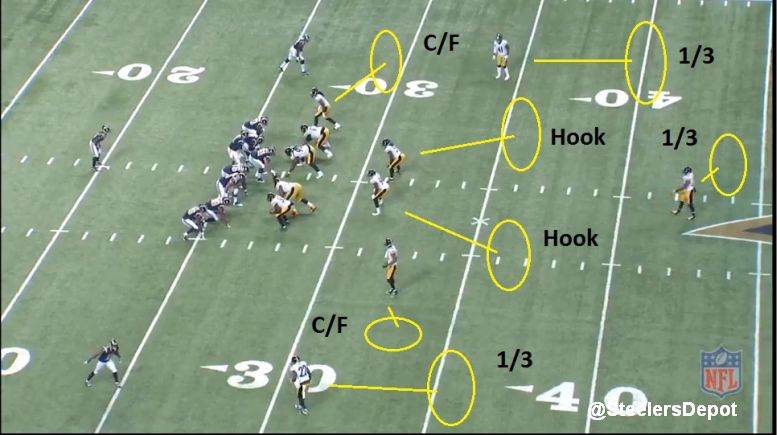 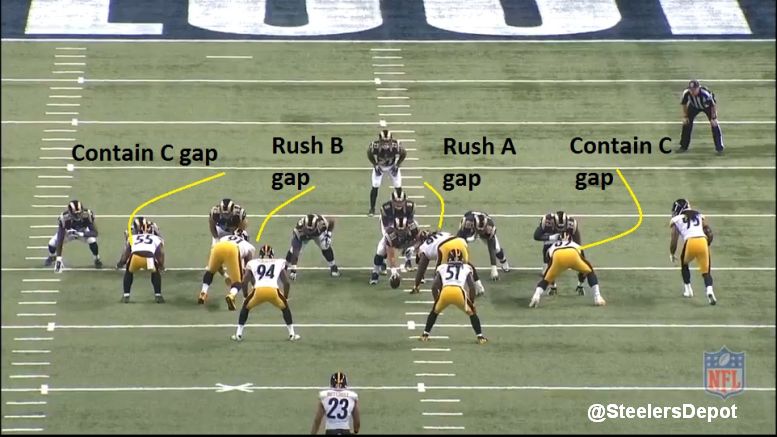 The #1 receivers run double-moves and the corners carry them vertically. The underneath curls and flat routes are covered by the underneath defenders while again, Tuitt beats the right guard to lead to the sack. 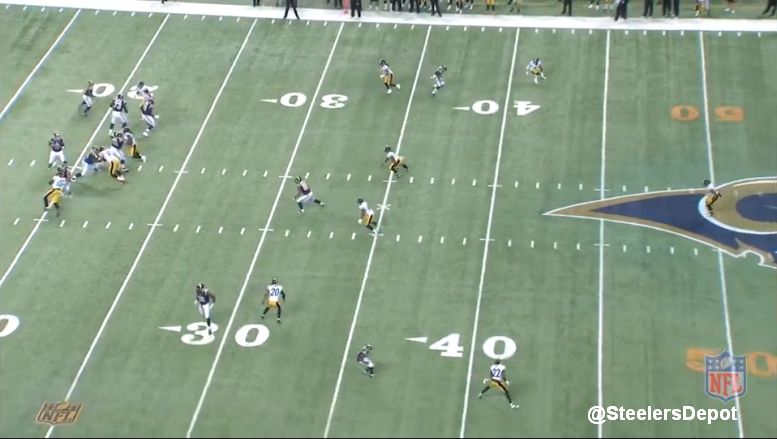 We’ll move ahead one week to the first tilt with the Baltimore Ravens. A slightly different route concept and how the Steelers’ Cover 3 responds plus some breakdowns in its contain rush.

The Ravens open up in 21 personnel, originally with a twin set to the top, but they motion the outside receiver across the formation. The Steelers respond by inverting their safeties, dropping the open side safety now down over the tight end as the CB takes the motioning WR. The originally rolled down safety now acts as the single high defender. 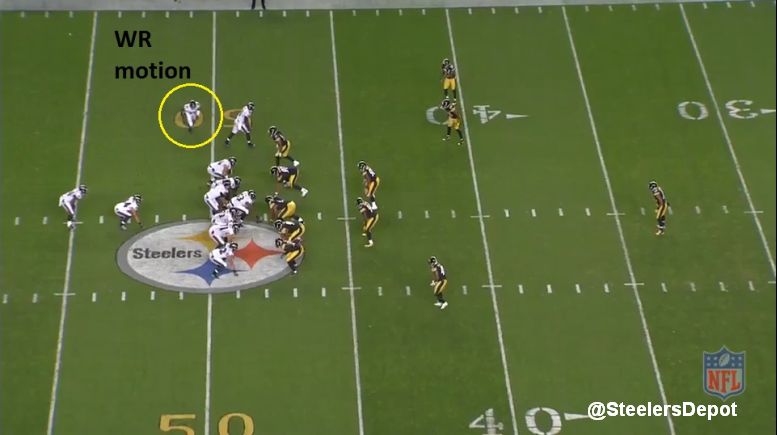 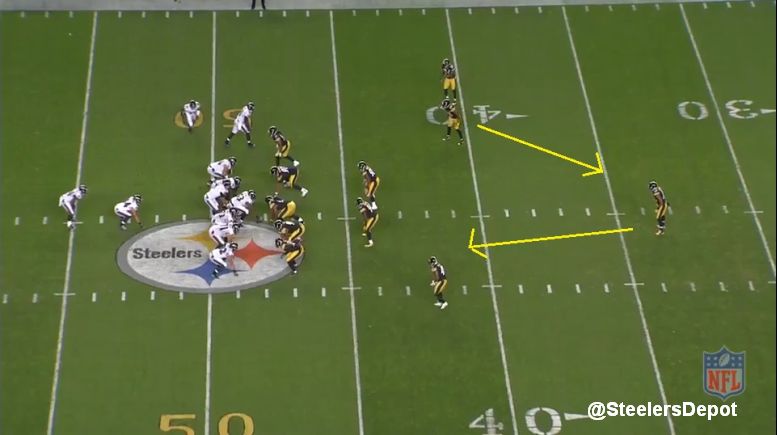 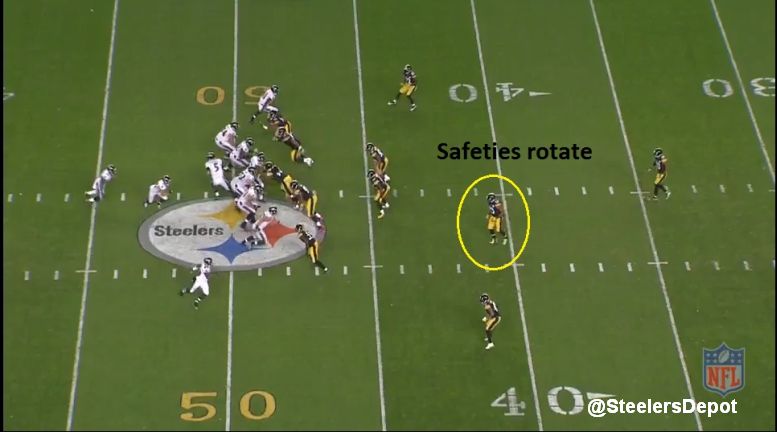 As a short aside, you can see a very easy example of how the teams’ safeties are interchangeable. To go from rolling down over a receiver to playing the deep middle in a moment. No one “strong” or “free.”

The Ravens run playaction with a mesh concept between the WR and the Y tight end. To the fieldside, it almost becomes a snag concept, with the #1 to the bottom on a corner, the FB releasing into the flat, and the backside #1 settling down across the field. 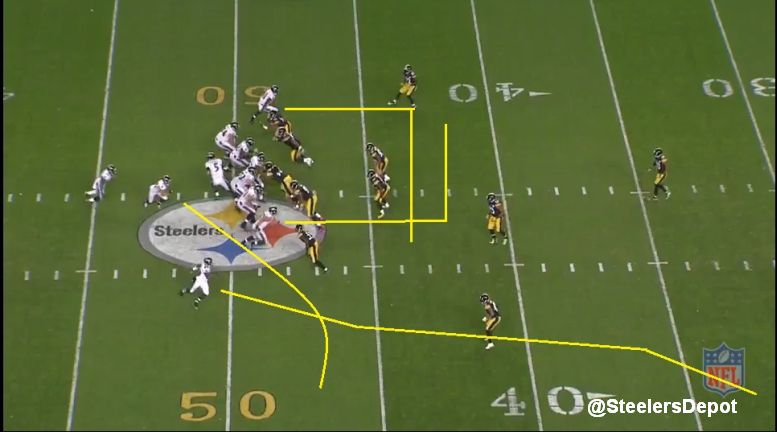 The Steelers still stay true to their Cover 3. In a very basic description of zone coverage, defenders man up when someone is in their zone, and then let them go when they leave, looking for other players about to enter their zone. That’s what happens here.

As the tight end runs his dig, Mike Mitchell lets him go. He’s out of his zone. Ditto with the #1 receiver to the boundary, who runs a dig underneath the Y, part of the mesh. The cornerback lets him go, not responsible for that short crossing route.

This creates “under calls” for the linebackers. They’re responsible for these crossers and you can see each player pick up their respective dig route, taking them away. 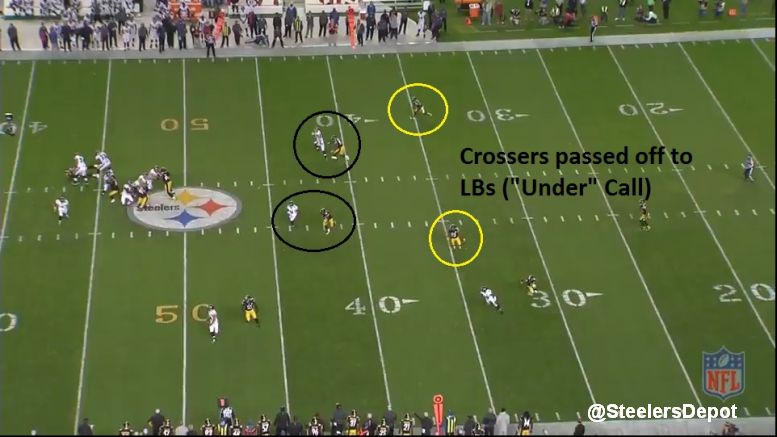 Elsewhere, Arthur Moats, dropping into his curl/flat responsibility, takes the fullback in the flat while the corner to the field takes the receiver vertically on the corner.

There’s nowhere for Joe Flacco to go with the football. The only problem the Steelers have here is with their contain rush. There is no contain to Flacco’s right. Instead of the drop-side end scooping down a gap, Tuitt gets caught up and stuck between the RT and chipping back. This gives Flacco an escape lane which he takes advantage of, extending the play. 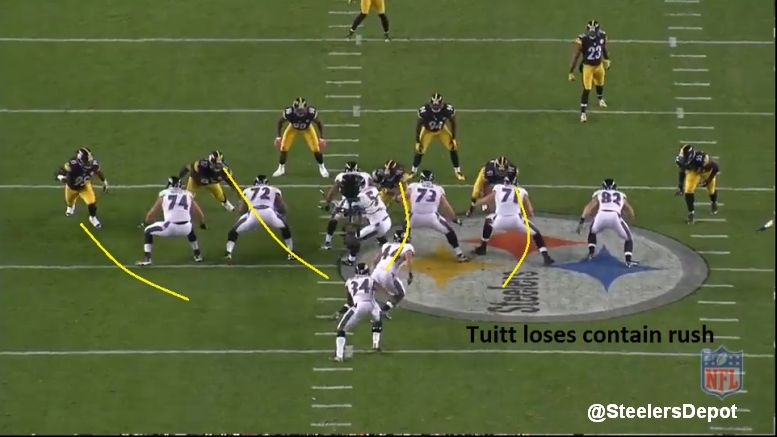 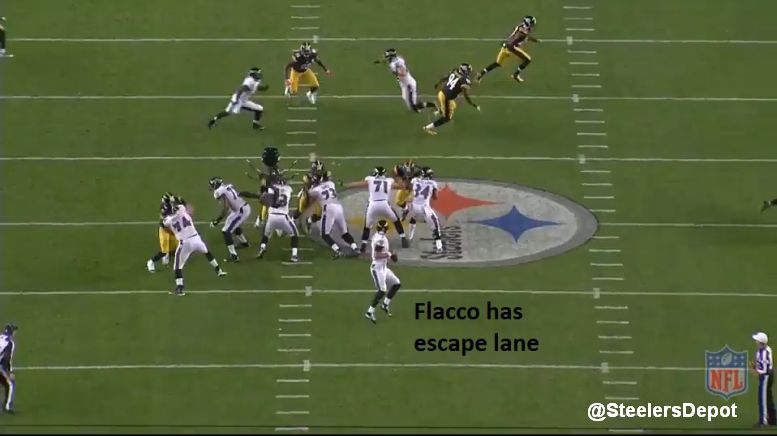 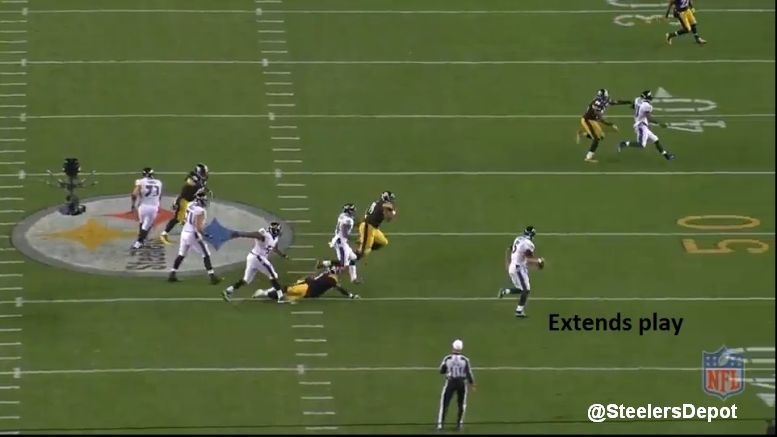 But with the play well covered and again, players having vision to the ball, they’re able to stay on top of the route as the play extends while Lawrence Timmons rallies downhill to sweep the leg of Flacco. If this is man, no one is going to see the QB run and Flacco probably gains yards.

These three examples have all come in 12 and 21 personnel. But we know that isn’t the league that exists today. We live in a world of 11 personnel and empty sets. So let’s take a look at how the Steelers can defend that out of their Cover  3 look.

3rd and 12 against the Denver Broncos in Week 15. Steelers employ their dime personnel, 2-3-6, to combat the Broncos’ 11 grouping, who come out in an empty set. 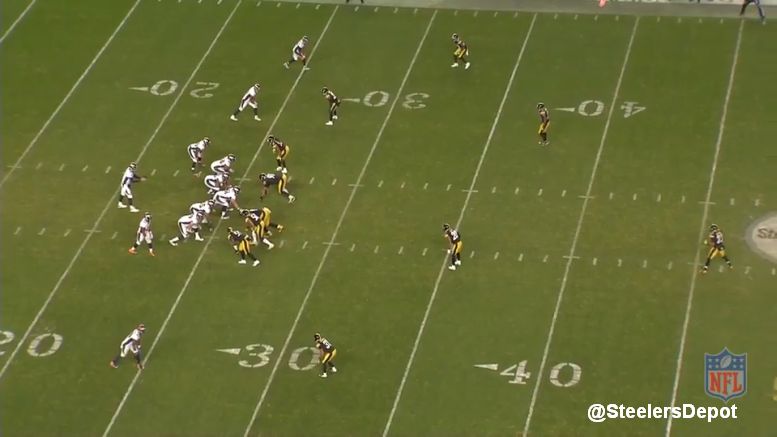 The #1 issue with Cover 3 is its vulnerability to a multi-vertical attack. It’s simple math. Four vertical routes beats three deep defenders. The popular way to stop a four vertical attack is Nick Saban’s Rip/Liz Match, a form of pattern reading. And while we’re not delving into the specifics of Saban’s concept (I’m still reading up on it, to be honest), the Steelers do their share of pattern reading here.

We actually pointed this play out in our breakdown of roles Sean Davis will have to fill but focused it just on Mitchell, the safety to the bottom. Let’s expand on it a little more. To the top, it’s 3 over 3. Will Allen passes off #2 vertically to safety Mike Mitchell with William Gay taking #1. If either of those receivers run a crossing route, they’ll be picked up by the interior hook zones, the under call we saw before.

To the bottom, Ross Cockrell basically becomes the curl/flat defender, letting #1 go on anything vertical. 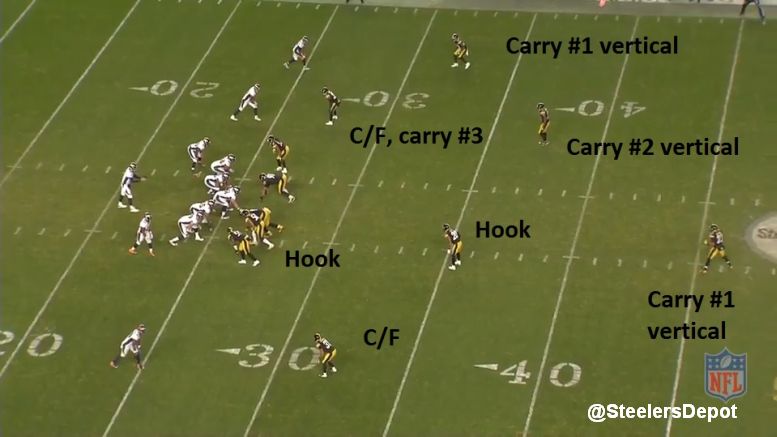 If #1 runs vertically, Golden will carry him. And that’s what happens. This, though it deviates from the “norm,” becomes the Steelers four under, three over. 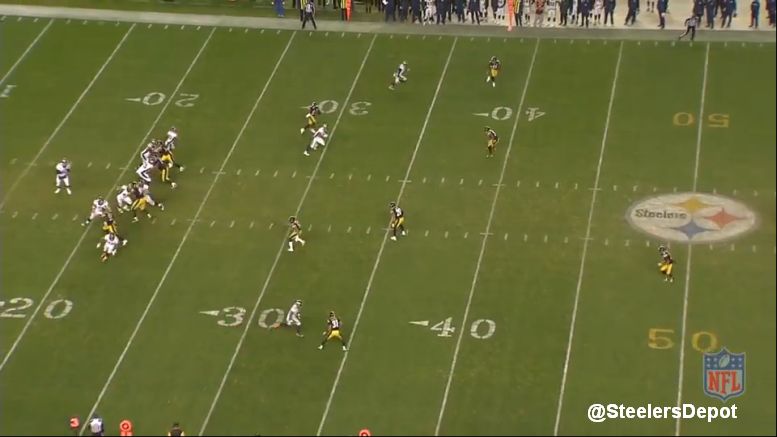 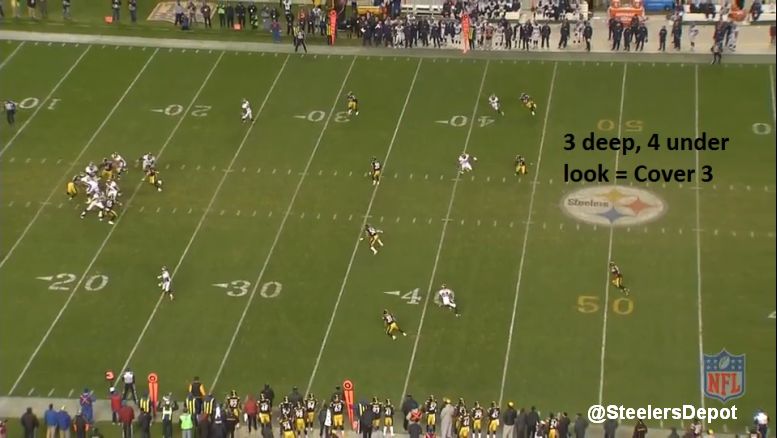 Nothing available for Brock Osweiler, who is taken down for a sack and the Steelers’ defense gets off the field.

Our final look. We’ve seen their conventional C3 in base, their C3 in sub-package, and now we’re going to sneak a peek at Pittsburgh blitzing in their Cover 3 shell from a sub-package look. Buckle. Up.

2nd and 5 versus Baltimore in Week 16. Steelers are in nickel against the Ravens’ 11 personnel. Creative look with Sean Spence stacked next to Dupree as LOLBs. 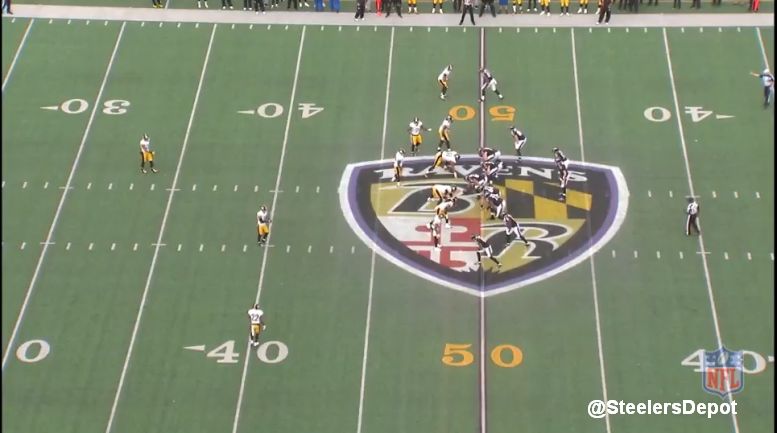 Gives the appearance of an overload blitz but Dupree and Spence bail into coverage, Spence taking the flat and Dupree the hook zone. Brandon Boykin blitzes from his nickel spot to the opposite side. The rest of the DL slides down a gap, though again, I’m not sure if the Steelers contain this rush on the right side as well as expected. 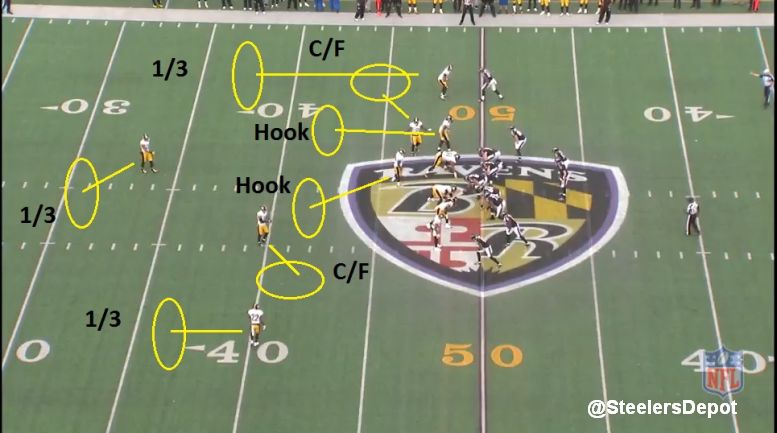 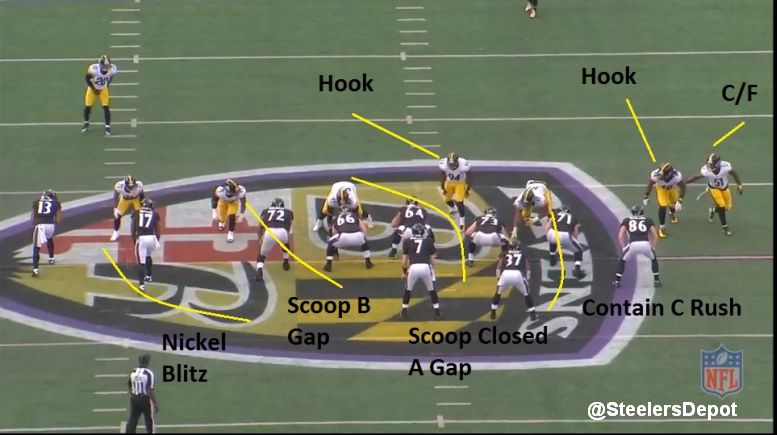 Still, the blitz works well with the OL sliding away from the nickel blitz. Boykin blows through the back and takes down Ryan Mallett. 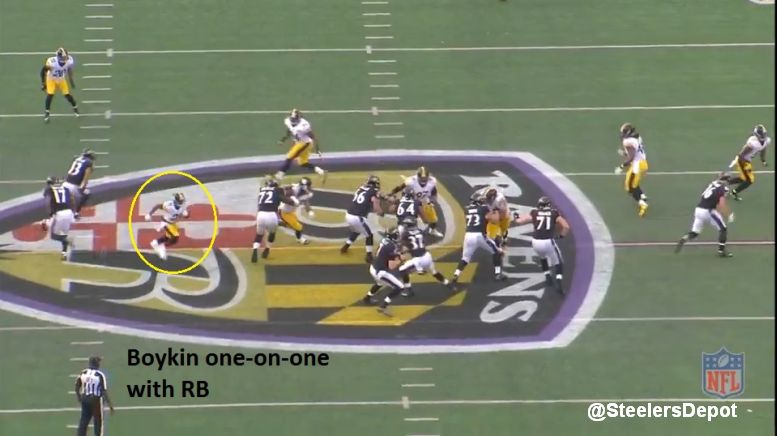 In coverage, you get the same principles. 3 deep, 4 under look. Spence and Will Allen responsible for the flats, Dupree and Timmons in their hook zones, the CBs playing the deep third and Mitchell patrolling the middle. Creative way at a four man rush, meant to confuse but keep that “safe” pressure LeBeau was so good at doing, usually with his five man Fire Zones.

Let’s look at it from each angle.

In a word, what we’re seeing here, is flexibility. And that’s why I love the Steelers’ scheme. Why I love their 3-4 and 2-4-5 defenses. It’s versatile, multiple, able to adjust to the different personnel groupings, formations, motions, and schemes you’re going to see on a week-to-week basis. The scheme is still going to evolve and you’re going to see some infusions of Mike Tomlin’s stamp on this defense. But hopefully, at its core, the Steelers will still thrive with their Cover 3.