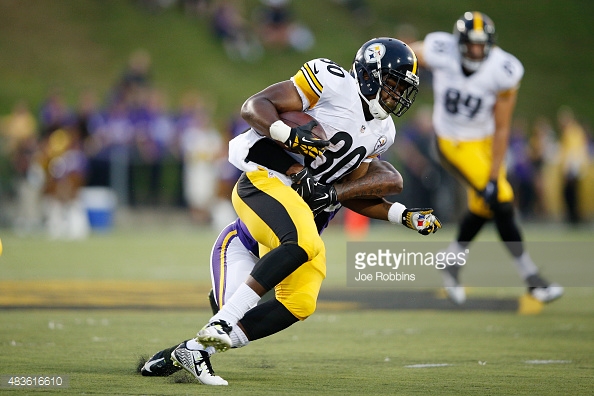 Last week, we speculated tryout-turned-signee Cameron Stingily might move to fullback. But this Steelers.com article seemed to dispute the notion, now sealed by David Johnson’s arrival. According to the article, Stingily has dropped 25-30 pounds, now sitting in the 225-230 range.

He played so heavy last year, as he tells Teresa Varley, because he wasn’t sure if he was going to be used as a fullback or running back out of college.

“Coming out of college they didn’t know if I was going to play running back or fullback. When I came here Coach Tomlin told he likes his backs to be big. They told me we just want you to be a big back and run the football. I still feel like I am a big back at 225. I can be what they need.”

That weight loss is vital for Stingily, someone I pointed out as slow and sluggish in his college tape and training camp action. Like he tells it, he’s still big, but can hopefully gain a step with his new-found diet.

His battle to make the roster will still be a difficult one. The fact he’s been signed to the roster twice says there’s something about him the team likes, but the path to the 53 will go through Fitzgerald Toussaint, an inexperienced back who played well in the playoffs, the costly fumble against Denver aside.

A practice squad spot is more attainable, as it is for most of these back-end-of-the-roster players. His main competition comes in the form of Daryl Richardson, a former draft pick who has played on Sundays. Brandon Brown-Dukes was signed at the same time Stingily was inked. They’re two contrasting styles. The burly Stingily juxtaposed with the scat-back Brown-Dukes, who’s at least 25 pounds lighter and several inches shorter.

The reps should be available for Stingily and company during training camp. Le’Veon Bell is working back from his season-ending MCL tear while DeAngelo Williams just turned 33 years old. It should limit their reps in training camp and the preseason, just as it did for Stingily last season, who racked up 58 carries in camp. He would’ve had even more had his leg injury not ended his season following the Hall of Fame game.

With how much is known with the top of the depth chart, and so much unknown at the bottom, a guy like Stingily should get every opportunity to prove to James Saxon and the coaching staff if he is worthy of a spot.