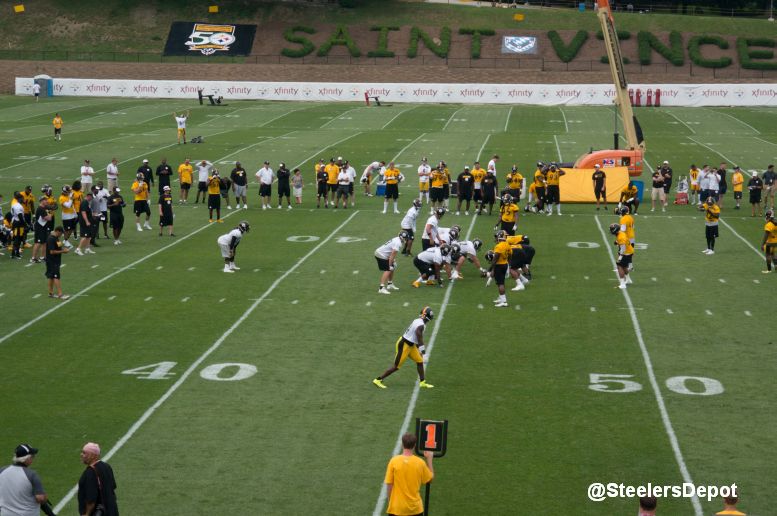 With the draft concluded, the Pittsburgh Steelers are close to setting their 90 man roster for training camp. But based on the pre-draft roster, draft picks, and UDFAs, the current roster sits at 93. Some post-draft shuffling is in order, even if there’s a twinge of depression we’re talking about cuts already. Business of the league and we’re already seeing players around the league receive their pink slips.

By my count, this is how the Steelers’ roster stacks up per position.

For comparison, this is how the team’s 90 man roster shaped up heading into Latrobe.

For the record, one of the bigger running backs – like UDFA Christian Powell – could be used as a fullback. Having one official doesn’t mean the team is “light” at the position.

So what positions is the team heavy at? Clearly, there’s a log-jam at kicker with a whopping three on the roster. Ty Long would be the most likely suspect to cut. Perhaps he makes it through rookie minicamp because of his eligibility (Kevin Colbert did say veterans are allowed to be brought in, however) but probably not much farther than that. Shaun Suisham could theoretically be a cap casualty but he might not even be healthy enough to cut. It’s the only reason why Long could hang around, serving as the summer leg to give Chris Boswell rest.

Long snapper Matt Dooley may get caught up in the numbers game, especially if one of the UDFAs has experience long-snapping. The Steelers carried just one true long snapper last season, using multi-threat Ian Wild as the technical backup, who barely even saw time there. The team is currently carrying seven pure special teamers as opposed to the four last year.

Who else could be in danger? The Steelers have 11 receivers and carried only ten into the fold last year. A slew of receivers on futures’ contracts were initially brought in, putting guys like Levi Norwood and Tobias Palmer on the chopping block. They have return value but after the team added Demarcus Ayers, along with current rostered players in Antonio Brown and Eli Rogers, the pair don’t stand out nearly as much.

Are any veterans possible cuts? Suisham aside, it’s hard to find a name who makes sense. Perhaps Jordan “Money Pit” Zumwalt will finally get ushered out the door. Or DT/DE Roy Philon, brought back for reasons that aren’t clear to me, especially if a tryout defensive lineman stands out.

The most probable veteran to leave could be offensive tackle Mike Adams. Though Mike Munchak mentioned his name over the draft, it’s hard to imagine Adams being here if not for a quirk in the CBA that allowed his contract to toll. After drafting Jerald Hawkins, the four tackle spots are all but sewn up to the rookie, Alejandro Villanueva, Marcus Gilbert, and Ryan Harris. Without any experience at guard, Adams has a very difficult path to climb back on the roster. Out of professional courtesy to him and a chance for Pittsburgh to give another name the opportunity to compete, Adams could get axed.

Though the upcoming moves will largely be ignored, it’s a pivotal moment for so many players. These aren’t camp bodies. They’re people who have worked their tails off just to get to this point. This weekend’s mini-camp is the first sink-or-swim moment for those on the bubble, or outside looking in. Unfortunately for some, their NFL hopes will be dashed just as quickly as it began.