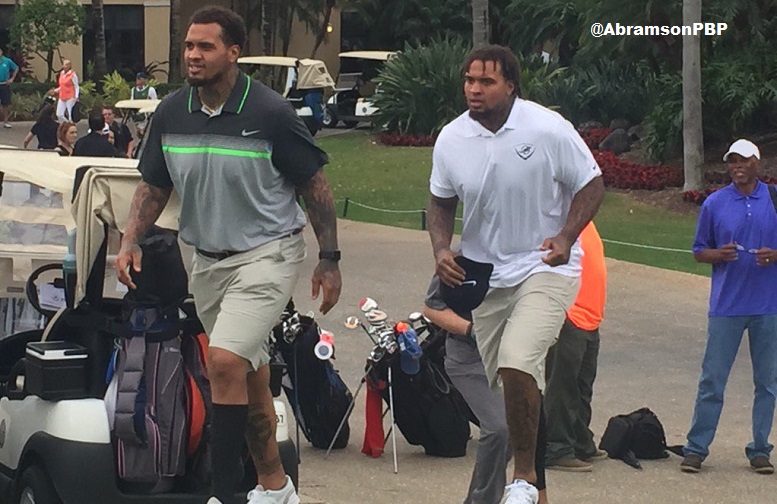 All signs continue to point toward Pittsburgh Steelers center Maurkice Pouncey being ready for the start of the team’s offseason program as he was spotted playing a round of golf on Monday with his twin brother Mike Pouncey at charity event.

Pouncey, who suffered a broken fibula in the Steelers third preseason game last year, wound up spending the entire season on the Reserve/Injured list after being placed there with the designated to return tag after he reportedly had to undergo another procedure on his injured leg due to an infection setting in.

Strangely enough, Mike Pouncey is also working his way back from a surgery as well as he needed his hip worked on after the 2015 season ended. According to Chris Perkins of the South Florida Sun-Sentinel, the Pouncey twins look to be recovering well.

“They don’t know we’re out here today,” Mike Pouncey told Perkins. “So I guess they’ll find out in a little.”

It’s obvious that the Miami Dolphins are fully aware that Mike Pouncey was playing in the charity golf event as it was sponsored by them. We can only assume that the Steelers have no issues with Maurkice Pouncey playing a round as well.

As you can see in the pictures and video provided, Maurkice Pouncey appears to still have some sort of covering on his previously injured leg. With that said, it was recently reported that he’s not being limited now in his offseason workouts.

When the Steelers offseason practices get underway in several more weeks we’ll get a better idea as to whether or not Maurkice Pouncey will be limited when it comes to his level of participation and there’s currently no reason to think that he will be.