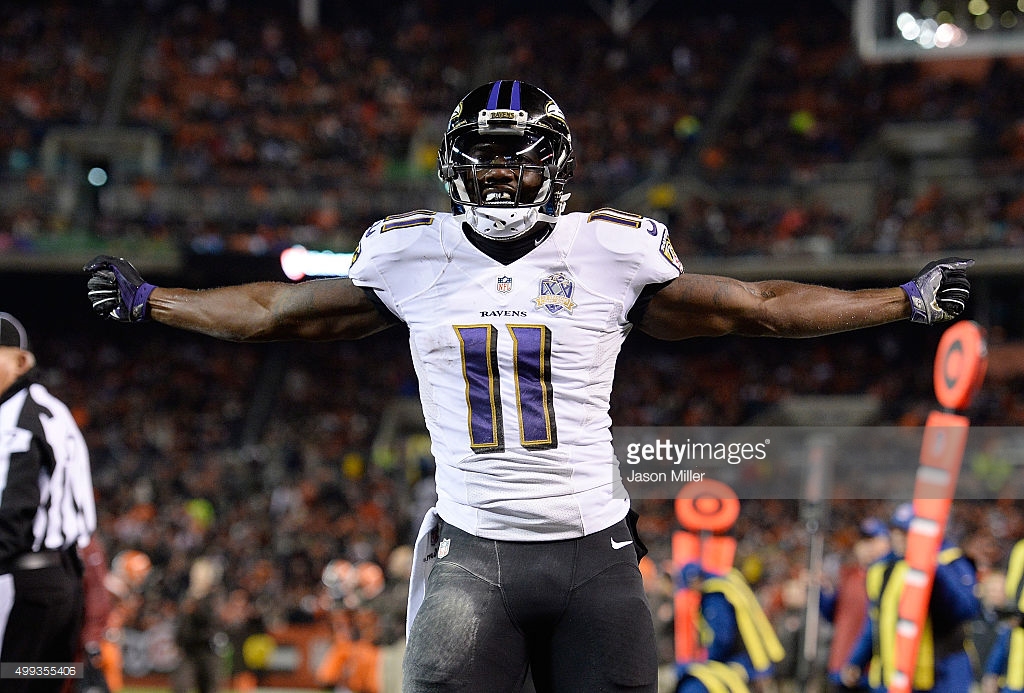 The Baltimore Ravens are probably not entirely sure what their group of wide receivers will look like—and more importantly, perform—for quarterback Joe Flacco in 2016 as he returns from a torn ACL.

Steve Smith was supposed to have retired, but chose to come back for one more season after landing on injured reserve. What exactly he might have to offer is unclear. The Ravens also went out and signed former Pittsburgh Steelers draft pick Mike Wallace, who has increasingly been a shadow of his former self.

Behind these two players, however, is a somewhat interesting theme: the majority of their wide receivers on the roster are rather tall, of the 6’2” or taller variety. And that list begins with Baltimore’s first-round draft pick last season, who never got a chance to play, Breshad Perriman.

Also notable was the acquisition of Chris Matthews, originally an undrafted free agent with the Browns, but who had some degree of prominence in the postseason in 2014 with the Seahawks. He was released mid-season and signed by the Ravens, playing in four games for them and registering nine receptions for 91 yards and a touchdown.

Of course, the Ravens still have Marlon Brown and Kamar Aiken, a pair of former undrafted free agents now in their fourth seasons, each of whom have at times been contributors for the team. Aiken was a primary starter last season and caught 75 passes for nearly 1000 yards and five touchdowns. Brown had a somewhat limited role in his rookie year but managed 49 receptions for 524 yards and seven touchdowns. His role has since been limited, in part due to injury.

Also notable are two other former undrafted free agents, second-year Daniel Brown and third-year Jeremy Butler, the latter of whom recorded 31 receptions over the course of the last eight games of last season. second-year former sixth-round pick Darren Waller was drafted as a wide receiver, but is working at tight end this offseason.

Waller is 6’6”. Daniel Brown, Marlon Brown, and Chris Matthews are all 6’5”. Aiken, Butler, and Perriman are all 6’2”. That is an awful lot of size in a wide receiver room, with seven wide receivers, including Waller, standing at at least 6’2” or above, some significantly above. And many of them have already played some notable role of varying significance for the Ravens in the past.

Now, it goes without saying that a number of these players will not end up making the 53-man roster, particularly with Smith and Wallace likely already being locks, but it’s possible that they have at least three or four of these additional receivers contributing, with Aiken and Marlon Brown being the two most likely other than Perriman to contribute, the latter also, obviously, a roster lock.

One might have a tendency to wonder if there is any correlation between Flacco’s affinity for the deep ball, the Ravens’ fortune in being able to draw a number of pass interference flags on such passes, and the proliferation of such tall targets. Either way, they will certainly be a good deal taller than the Steelers’ secondary.