With the 2016 NFL draft now just weeks away, now is a good time to rank our beloved Pittsburgh Steelers‘ previous draft classes. The rating of NFL draft classes will, of course, always have a subjective element to it. However, I have attempted to create the most objective rating system possible by using only objective metrics to create a relative Draft Value for each player.

My rating system is simple and can be applied to any draft class, any player, and any team, and thus may be used to compare the relative value of a team’s draft classes, individual draftees, or different teams’ draft classes over time.

There are only two ratings in my system – the first is a measure of the probability of success or failure for a particular player’s draft position. For this, I made use of Datascopeanalytics.com’s blog that quantifies what a “bust” in the NFL amounts to. How do they define what a bust is?

“A bust is a player that ends up with a value score of less than 5 according to pro-football-reference.com. A value of less than 5 is equivalent to a marginal role player that has limited game experience and contributes little to no value to an NFL franchise.”

In 2012, Datascopeanalytic.com examined 50 years’ worth of draft picks and came up with this graphic depicting the probability of a particular pick number being a bust: 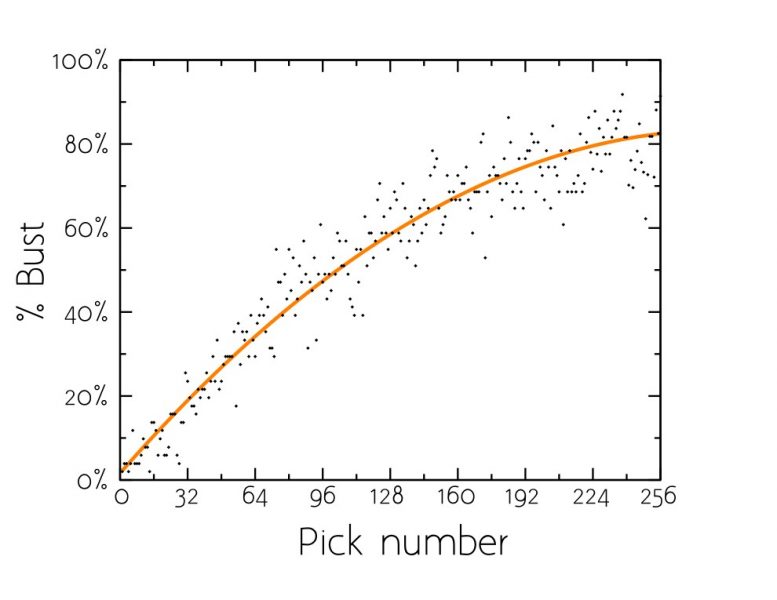 So, as an example, a player drafted with the 16th overall pick would have about a 10% probability of “contributing little to no value” to an NFL team, i.e. of being a “bust.” I refer to this value as a player’s Bust Multiplier.

The second metric in my rating system is simply a Player Rating. I’ve tried to take as much subjectivity out of this rating system as possible by assigning quantifiable scores from zero to ten:

I made use of pro-football-reference.com to help me in determining Player Ratings. Now that we have our two metrics, we can simply apply them to any player ever drafted to determine their relative Draft Value, which is determined as shown below using the 2005 draft as an example:

Here we have each player’s Draft Position, Rating, and Bust Multiplier. Min and Max Scores represent the range of Draft Value that a player can achieve. Because players drafted earlier should carry much less risk, they rightfully cannot achieve a Draft Value that is higher than for those drafted later. Remember, this is a relative comparison. By the same token, high draft picks receive a much lower minimum score (i.e., are penalized more) in cases where they don’t pan out.

The Draft Value score is, in my opinion, a very good metric to use to compare the relative value of any pick, and thus gives a good indication of how well the team drafted. Draft Value is NOT intended to compare how good one player is with another. For example, in the 2005 draft above, a pick like Chris Kemoeatu at no. 204 is actually a better draft pick relatively speaking than Heath Miller’s pick at no. 30. Why? Well, frankly, a team SHOULD get a pick at the bottom of the first round right, and in this case the Steelers did just that. But, there’s a much higher probability of finding a good player at no. 30, as 82% of such picks should be of value to their team. However, for a team to pull a starter-quality player out of their hind-end at pick no. 204, now that takes some doing. Thus, the pick at no. 204 is actually a better value pick relatively speaking than the Miller pick at no. 30. We all know Miller is a much better player than Kemoeatu…but that’s not what this system is measuring.

Why does a player like Fred Gibson at pick no. 131 and with a rating of zero have any draft value, you ask? Remember, this is a relative value analysis. A player picked at no. 50 with a zero rating is certainly a much worse pick than one at no. 250 with a zero rating. And a pick at no. 244, with only an 18% chance of returning any value to a team, certainly should not be as penalized as much as a first-rounder should be if both players were complete washouts.

Note: even if a player did nothing as a Steeler but went on to have success in the league with another team, that was factored into their Rating. Think Kraig Urbik, for example. Also, draft pick trades were not considered in this analysis.

I analyzed all draft picks going back to the 1969 draft (the Joe Green draft), except the most recent draft in 2015 (just too early to tell). Obviously, some of the recent drafts require some amount of prognosticating when it comes to a player’s Draft Value. With a few exceptions, I only analyzed down to about pick no. 250 for the older drafts (they used to be many more rounds in size back then) in order to compare apples to apples between draft classes today, which only go seven rounds. In comparing the Draft Values, there certainly are some interesting conclusions we can draw, especially when talking “Best Steelers Draft of All Time” – more on that later!

No surprise that L.C. Greenwood, a Hall of Fame finalist, and Antonio Brown, who I’ve projected as a future Hall of Famer, have the two highest Draft Values by far of any Steelers pick. Just look at their ultra- low draft positions! I’m also pleased to see Mike Webster, whose grass I used to cut when I was a teenager, in the top four.

Of note here are some fairly infamous names, including the worst all-time Steelers bust Huey Richardson at the top. He ended up dressing for only five games in a Steelers uniform, was cut after his first year, and rode the bench for 11 games the next season on the Jets and ‘Skins teams before being put out of the league for good. I don’t believe he ever played a snap in the NFL. At pick no. 15 overall, he’s the easy choice for worst Steeler draft pick of all time.

And, who among recent fans could forget the Limas Sweed debacle of 2008, placing him in the top five Steelers busts as a second-round pick? Very encouraging is that only two players drafted in the new millennium made the top 25 worst, so the Steelers must be doing something right lately.

Now let’s take a look at the top three Steelers drafts of all time. The 1974 Steelers draft is widely considered to be the best draft in NFL history, period. However, look closer at that draft and you will see that, yes, while the Steelers netted FOUR Hall of Famers (likely to never be duplicated) in the first five rounds, they completely whiffed with total washouts on the majority of the rest of their picks. Now, take a look at the 1987 draft, i.e. the Rod Woodson draft. That draft brought Hall of Famer Woodson along with near-Hall of Famers Hardy Nickerson in round five and Greg Lloyd in round seven. It was also a strong draft throughout, with three other starters including Merrill Hoge way down at pick no. 261, and only two washouts. For that reason, the average score for that draft slightly tops the 1974 draft. The third-best draft, in 1993, was perhaps the team’s most consistent draft ever, as all ten picks contributed at least something and Chad Brown was taken in round two.

Worst draft? Look no further than the abysmal 2008 “Rashard Mendenhall” draft. An abject failure this, with Mendenhall the only starter (and he was a rather poor one at that). He was followed by the aforementioned Sweed, one of the top-five worst value draft picks in Steelers history. The 1973 and 1978 drafts are the second and third worst drafts for the Black ‘n Gold.

Following are the results for all of the Steelers drafts between 1969 and 2014. Projections for players from recent drafts may end up being drastically off-base (Martavis Bryant, anyone?).