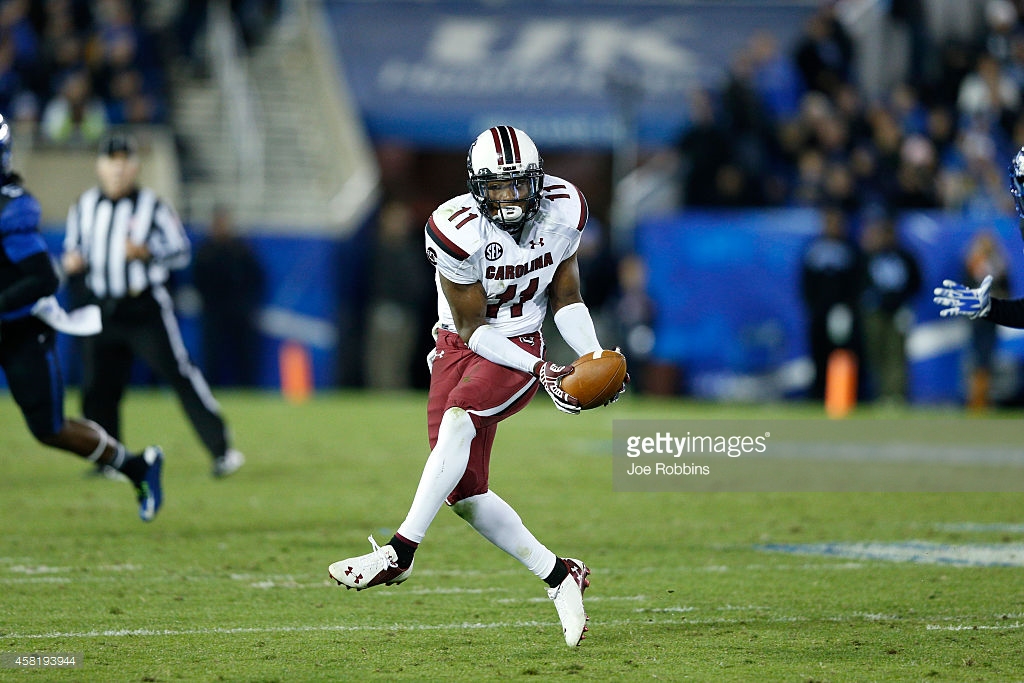 We’re already in the last round of the draft. Time flies when you’re having fun, right? By now, it’s awfully difficult to try and come up with a realistic list of names, but we’re going to do our best here.

1. Pharoh Cooper/WR South Carolina: Odds feel good the Steelers will finally take a dive onto the offensive side with the fourth pick. Wide receiver has a strong chance to be the position and Pittsburgh brought in only two receivers. Sterling Shepard is off the board, leaving just Cooper. He didn’t time great (31 inch vert, 9’7″ broad) but there’s obvious interest and he has return value.

2. Jerald Hawkins/OT LSU: Had him on here yesterday so we carry him over today. Like Cooper, Hawkins was one of two offensive linemen brought in for a visit. He’s long with extensive starting experience at both tackles spots.

3. Nick Kwiatkoski/ILB West Virginia: This would have the team select four defensive players in the top four, slightly bumping Kwiatkoski down on this list. He’s a decent athlete, team leader, who can hit and generally flew around the ball at West Virginia. See him as a guy who can make a big special teams’ impact Day One. This was one of the nine campuses Mike Tomlin and Kevin Colbert stopped at during the pre-draft process. Getting their eyes on these prospects always increases the chance. As much as you trust your scouts, it’s a little different when you see a guy with your own two eyes.

4. Chris Moore/WR Cincinnati: There’s not much of a connection beyond the fact that I like him. He’s a vertical threat who lacks 4.4 speed but shows the ability to separate at the top of the route. Like his hands and body control. Again, receiver could be an option here.

5. Tyler Ervin/RB San Jose State: Running back’s coach James Saxon was at his Pro Day. Dynamic threat in the open field. Despite his size, a tough cookie who runs hard inside. Ideal return value. I’m all for the idea.

6. DeVontae Booker/RB Utah: Need isn’t a reason but I could see the value here. Steelers brought him in for one of their last visits. As we get later in the draft, talent dictates most of the decisions. Best way to maximize your chances of success.

7. Cardale Jones/QB Ohio State: You know my feelings on taking a quarterback by this point, are there any fans excited about Jacoby Brissett or Cody Kessler getting drafted, but Jones makes sense for a couple reasons. Big arm. Mobile. Buckeye. Needs time to develop and would be given that chance in Pittsburgh.

1. Caleb Benenoch/OT UCLA: The guy has all the tools to work with, strong with light feet, but he’s all over the map technically. Switching between right guard and tackle probably didn’t help his development. Developmental pick but again, the talent is there. Brought in for a visit. Honestly, not sure if he’ll be here.

2. Jatavis Brown/ILB Akron: Another pre-draft visitor. Brown is a supreme athlete and despite some thinking about moving him to safety, I think he’s likely to stay in the box at the NFL. As we’ve mentioned before, Lawrence Timmons and Vince Williams are in the final year of their deals.

3. Stephen Weatherly/OLB Vanderbilt: This would be a fun pick to play around with. A big guy at 267, he was moved between defensive end and linebacker. Tested very well and met our outside linebacker criteria. Draft doesn’t have a ton of pass rushers left and there isn’t much of a connection here, but I’ll stick my neck out for him.

4. Ken Crawley/CB Colorado: Is this the year the Steelers go tall and lean in the secondary? Already done it with Artie Burns and Sean Davis. Crawley comes in at 6’0/3, 187 pounds. Ran a 4.43, jumped 36.5 inches in the vert, and 9’11” in the broad. Though they were Pro Day numbers, his shuttle drills were excellent. Brought in for a visit. 44 career start, been doing it since his true freshman season. Only obvious knock is his production. Forced just four career turnovers, despite all that playing time.

5. DeAndre Elliott/CB Colorado State: Bumped him under Crawley because he wasn’t brought in for an official visit. But the Steelers do have interest, sending personnel out to his Pro Day, even though he didn’t work out. Durability has been an issue but he has the height, speed, and excellent change of direction ability. As I wrote in my scouting report, profiles extremely similar to Ross Cockrell. But Elliott is longer and a bit twitchier.

6. Jack Allen/C Michigan State: Again, no known interest in him, but he’s one of those guys that just isn’t going to be cut. Tough dude, great anchor, has a nasty streak. If he was bigger, he might be off the board by the first two days.

7. Mitch Matthews/WR BYU: We fall in love with height at the position but Matthews has the hops and speed to match. 6’5/5 with a 38 inch vertical and apparent 4.49 at his Pro Day. However, like most Cougars, Matthews is probably on the older side. When we’re talking about late round picks though, if you can get him for his whole contract, you’ve already won.

8. Dadi Nicolas/OLB Virginia Tech: I’m not crazy about him but the Steelers did bring him in for a visit. Athletically, he does pop. But think he needs to play in a very simple scheme to thrive. Only edge guy brought in.

9. Tom Hackett/P Utah: I’m going to throw his name out here for all your special teams’ lovers out there. Just like me. Jordan Berry showed some promise last year, especially pinning teams back, but consistency alluded him. Hackett had a great season for the Utes. It’s not like we know Pittsburgh is philosophically opposed to taking a punter. They traded up to take one in the fourth back in 2007.

1. Brandon Shell/OT South Carolina: Another big, long mauler. Mike Munchak went down to the Gamecocks’ Pro Day and you know Munch will have pull in the room. Shell is coming off shoulder surgery though and that could push him out of the draft.

2. Trae Elston/S Ole Miss: Plays with a ton of energy. Processes info quickly, fills the alley and flies around the field. Shows the ability to high point the football in coverage. Brought in for a visit.

3. Matt Skura/C Duke: Laid out the reasons for this before. Steelers had people at his Pro Day and Jeremy Cash wasn’t working out. Sure team knew that. Has a connection with Shaun Sarrett, who likely recruited him to come to campus back in 2011. Small world.

4. Jarrod Wilson/S Michigan: Honestly, don’t know a ton about him. But like Elston, he was a visit. If there’s a time to take a flier, it would be in the seventh. There really isn’t a “board” for us to follow anyway.

5. Joel Heath/DE Michigan State: Dave Bryan was the first person I saw to talk about him. With a ton of length, Heath didn’t get much of a chance to be productive due to injury and lack of playing time. Tested well at Indy. One of four defensive linemen to fit our draft criteria.

6. Ufomba Kamalu/DE Miami (FL): Could copy and paste the Heath rationale for Kamalu. Only 11 game starter. Raw kid. But long and works hard. Like Heath, his times at the Combine fit our criteria. Only others were Chris Jones and Robert Nkemdiche, both going within the top 50 picks. Nice company.

7. Jay Lee/WR Baylor: Didn’t test great but he’s a big body and shows the ability to be a threat after the catch. Todd Haley was at Baylor’s Pro Day and he probably would pound the table for him.

8. Kyle Peko/NT Oregon State: Not sure if he can even make the 53 man roster, he’s not versatile enough, but the upside here is legitimate. 12 game starter, one year of football at the FBS level, and played well. Steelers scout spoke to him at the NFLPA Bowl game. Some small other Pittsburgh connections.

9. Jakeem Grant/WR Texas Tech: If the Steelers hadn’t taken a receiver yet, Grant would sure be a fun guy to play around with. Sandlot football player but has some of the best lateral agility and straight-line speed of anyone in the last five years. We’ve seen the Steelers go down this road with Dri Archer and Chris Rainey before. Grant is more athletic than both of them.

10. John Theus/OT Georgia: Four year, SEC starter. Those guys aren’t found very often and even though Theus has a funky stance and struggles with speed, I can see the allure for Pittsburgh.