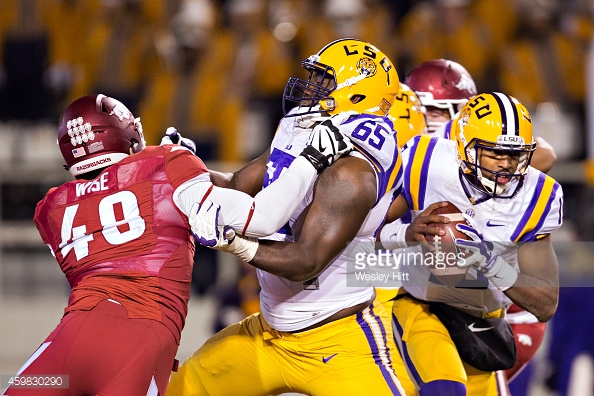 The Pittsburgh Steelers selected LSU tackle Jerald Hawkins in the fourth round of the 2016 NFL Draft on Saturday and offensive line coach Mike Munchak immediately talked about the pick with the media.

“I think he’s a left tackle to us, he played there as a junior coming out and we feel he has a lot of talent, has a lot of growth ahead of him, said Munchak. “He can play both sides, left tackle and right tackle, can come in here and help right away competing and pushing the guys makes it better.”

Munxchak said as far as sides go for Hawkins, he wants to start him off where he’s most comfortable and he believes that will ultimately be on the left side. He’ll do that in order to build his confidence up.

“I think he’s a guy that comes in and if he’s most comfortable at left, it doesn’t mean anything, you start at left as far as his reps go and you see what he can handle and then you start moving him to both sides instead of mixing them right away,” said Munchak.

Munchak said they were attracted to Hawkins being as LSU does a lot of things on offense that are similar to NFL offenses.

Even though he only played three years at LSU, Hawkins finished his college career with 37 total starts. 25 of those came on the right side with the other 12 coming last year on the left side. Hawkins allowed 4.5 sacks last season and according to STATS, was never beaten with a bullrush. He also was penalized just once last year for holding.