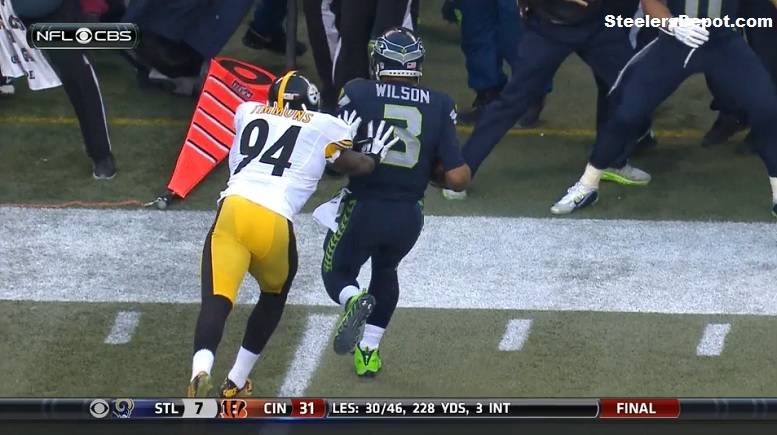 Lawrence Timmons is no stranger to football. Neither is James Harrison or William Gay. And to Timmons, they are the catalysts to the Pittsburgh Steelers’ defensive success.

“We have a lot of guys that have been doing it for a long time,” Timmons told Teresa Varley in Part 2 of their exclusive sit down. “James Harrison, Will Gay. To get us going. Especially [Gay] with the pick six. Everybody loves pick sixes. So that brings a lot of energy to the game and gives you energy to come out and be apart of that.”

Though not covered specifically in the interview, Harrison’s leadership has proven to be invaluable. Several players have joined him at The Danney Center in Scottsdale, Arizona. Those have included: Stephon Tuitt, Mike Mitchell, Ryan Shazier, and Robert Golden.

There is a joking competitiveness, with each player working out, and then ribbing their teammates about how much more they can lift. Harrison and Golden have been having a field day on Instagram.

Ramon Foster had a field day with the Crying Jordan meme you love.

A Deebo @jhharrison92 when Rob G challenged you, this all we saw ???? @realrclark @maurkicepouncey @marcus77gilbert @goldenb0y21 Gator don’t take no *** lol. Sorry Rob G it was a group discussion man. ???.

We’re getting a little bit away from the Timmons’ interview. To tie a bow on it, there’s the general idea of veterans keeping a competitive, positive attitude and atmosphere, while being able to shoehorn in the younger group at the same time. This is, at its essence, what a good team is all about.

In fact, it’s Timmons who credits Harrison for showing him the ropes when he was a wide-eyed, first round pick back in 2007.

“James Harrison really helped me out. Troy, all the older guys. I was blessed to be apart of those guys. And they were all legends today. Just being apart of that, they showed me the way.”

In five years, hopefully Tuitt and Shazier say the same about Timmons.