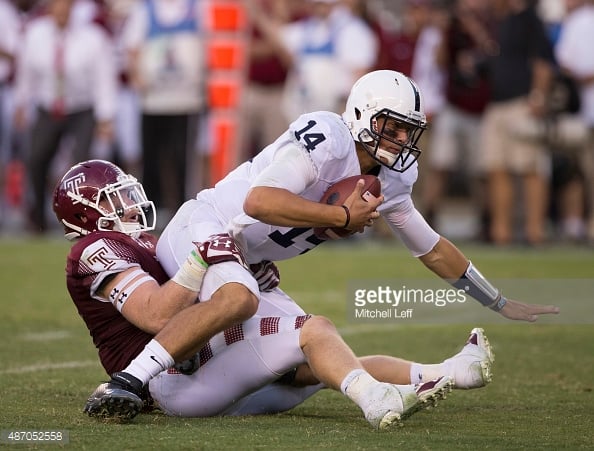 Wrapping things up for the 2015 NFL Draft, the Pittsburgh Steelers went linebacker for the second time in three picks, selecting Temple inside linebacker Tyler Matakevich, filling a definite need on the depth chart.

Prior to the draft, many thought Matakevich would be an early day three selection, so to get him at No. 246 overall is another great value pick for the Steelers in the later rounds.

Matakevich won the 2015 Nagurski Award as college football’s best linebacker, as well as the Bednarik Award, finishing his career at Temple with 493 tackles (almost 125 tackles a season).

The 6-foot, 238-pound linebacker is an instinctive player that likely fell to this pick due to his height limitations and lack of long speed (4.8 40-yard dash), but he plays much faster than that on film.

Considering the Steelers needed to address depth at inside linebacker while finding some solid special teams contributors to replace Sean Spence and Terrance Garvin, Matakevich makes a ton of sense here.

Our very own Luc Polgaze was very high on Matakevich, so I’m sure he feels the same was as me with the value of the pick.

There were plenty of ways the Steelers could have gone with this pick, but the selection of Matakevich makes a ton of sense for the depth and makeup of the defense currently under construction.

He’s a self-made player that works hard and has nearly perfected his craft.

Where he fits on the roster is uncertain, but with his work ethic and want-to attitude, I wouldn’t be surprised to see him get a hat on game day as a special teams terror.