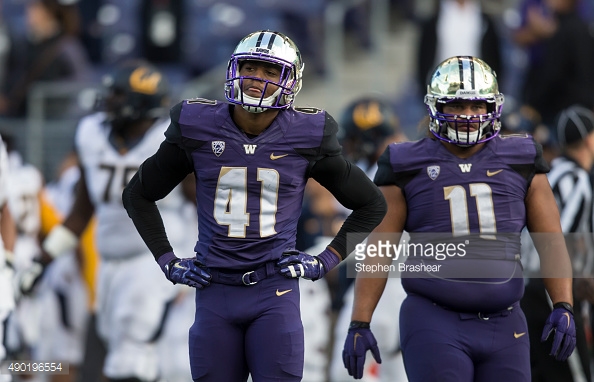 It took awhile, but the Pittsburgh Steelers finally got a chance to pick again in the 2016 NFL Draft.

After missing out on the fifth round, Pittsburgh addressed a major pass rushing need with University of Washington outside linebacker Travis Feeney with the No. 220 overall pick.

Considering what was left on the board at the time of the pick, Feeney is a great value pick for the Steelers.

The 6-feet-4, 230-pound linebacker had an outstanding senior season for the Huskies as an outstanding defensive chess piece, moving all over the field while wreaking havoc in opposing backfields.

With his height, frame and length (33 1/2-inch arms), Feeney certainly fits the mold of Steelers outside linebackers that Kevin Colbert and Mike Tomlin like to bring in.

Feeney’s a guy who originally committed to Washington as a safety but made the transition to linebacker for his junior season. From there, he simply blew up and turned into a very good edge defender.

According to Pro Football Focus, Feeney posted a 9.9 run stop percentage in 2015, which was tied for fifth-best in this edge defender class, and added 17.5 tackles for loss and eight sacks.

Although the Steelers have struggled with finding edge rushers in the later rounds of the draft, Feeney looks like the guy who can break that trend.

In fact, I’m surprised he was on the board at No. 220. With his explosiveness, physical tools and work ethic I had him ticketed for the late-4th, early-5th round. I can’t tell you how valuable this pick is.

Feeney is a terrific athlete who should be fine dropping into coverage while still being able to get around the edge and put heat on opposing QBs.

With a 4.50 40-yard dash, a 40” vertical jump and a 4.20 short shuttle, Feeney is an explosive athlete who will be a fun weapon to watch develop under linebackers coach Joey Porter.

This pick smells like a classic Tomlin pick, going after a high-level athlete with strong traits to work with. It might take time for Feeney to make an impact as a pass rusher, but this is a tremendous value pick for the Steelers late in the draft.