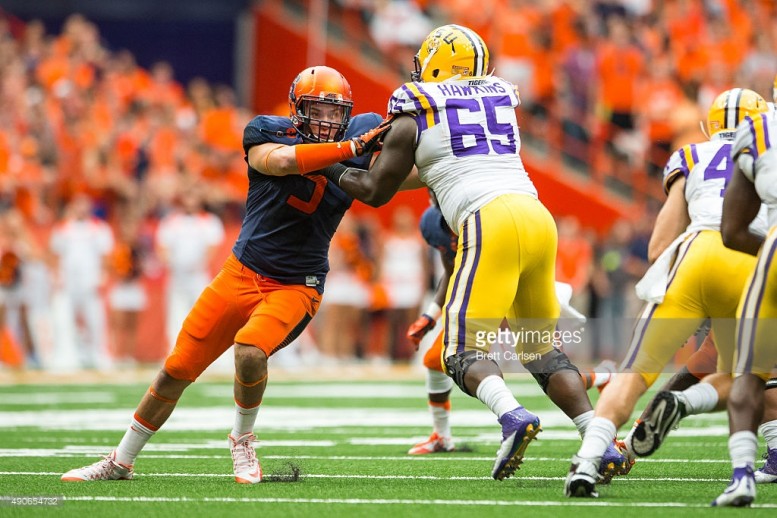 Hawkins was arguably the best offensive lineman for the Tigers the last two years. During his time in Baton Rouge, the 6-foot-5, 305-pound tackle started 37 career games (25 at right tackle, 12 at left tackle) and projects as more of a right tackle or guard in the NFL.

The senior is a bit raw in terms of his development, usually getting by with his height and length, but getting a chance to develop under Mike Munchak is a blessing for this kid.

Hawkins has a great punch and anchors well in pass protection, but he has slow feet hinders his ability to get out onto quicker pass rushers. In the running game, Hawkins is a mauler that really drives downhill well. He could work on bringing his feet through contact a bit more, but the pick makes a ton of sense for the Steelers.

Overall, Hawkins was a guy I saw as more of an early-5th rounder, but the pick is good value for Pittsburgh.

I don’t view it as much of a reach, but some might and that’s certainly okay.

With guys like Arizona State’s Christian Westerman, Georgia Tech’s DJ White and Utah’s Devontae Booker still on the board, the Steelers could have gone a number of ways, but the versatility and high-level experience of Hawkins makes a ton of sense and provides good value for a team that has already address the major holes on the team in the first three rounds.

He certainly wasn’t a guy that I targeted as a possible Steeler, but the franchise continues to address depth in the trenches, which is a good way to build a team.

Hawkins will need to sit for at least year under Munchak to work on his lower body flexibility, but this was essentially a luxury pick for the Steelers.

This is the mid-round pick that could be the one that pans out the most down the line for Pittsburgh as long as Munchak continues to work his magic with the offensive line.