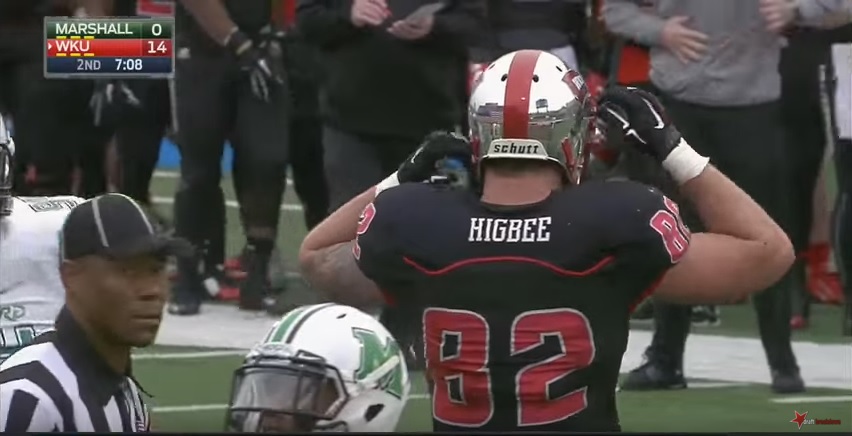 With less than three weeks to go until the start of the 2016 NFL Draft, many analysts had Western Kentucky tight end Tyler Higbee as one of the top two or three players at his position in this year’s class. Now, thanks to Higbee being arrested Sunday morning and charged with second-degree assault, alcohol intoxication in a public place and second-degree fleeing for evading police, his future draft status is now in question.

According to Zach Greenwell of the Bowling Green Daily News, Higbee was reportedly booked at the Warren County Regional Jail at 2:41 a.m. Sunday and held on a $10,000 bond until he was ultimately released at 3:15 p.m. Sunday.

The 6-foot-6, 250-pound Higbee caught 48 passes for 563 yards and eight touchdowns last season despite missing five games with a knee injury. At his pro day last month, Higbee was still limited in what he could do as far as on-field workouts go and that won’t change prior to the draft taking place.

It will now be interesting to see just how far Higbee falls in this year’s draft due to his Sunday incident. While some are going as far as to speculate that he could wind up going unselected, I’m willing to bet a team takes a chance on him somewhere after the fourth round.

This year’s draft class is really top-heavy when it comes to the tight end position. In fact, Arkansas’ Hunter Henry is perhaps the only young tight end likely to be drafted in the first two rounds.

As for the Pittsburgh Steelers, their need for a tight end in this year’s draft diminished greatly when they signed free agent Ladarius Green to a four-year, $20 million contract during the first night of the new league year. That move came on the heels of veteran tight end Heath Miller retiring a few weeks prior to the start of free agency.