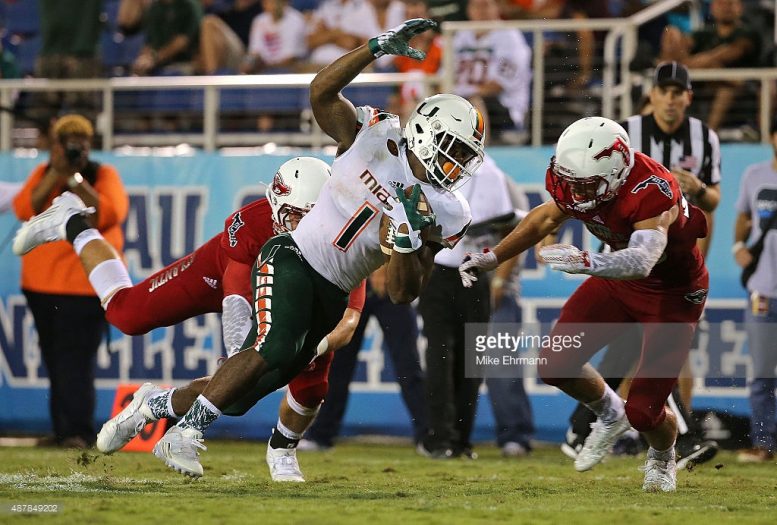 By now, most of you should have already fully digested the Pittsburgh Steelers decision to select Miami cornerback Artie Burns with the 25th overall selection in Thursday’s first round of the 2016 NFL Draft. While the debate will continue as to whether or not the Steelers made a need-reach in selecting Burns with the 25th overall pick, we won’t fully know what kind of player he’ll wind up being in the NFL for some time.

Regardless of what you think about Burns right now, most of you should have already come to the conclusion that he’s a very raw player with upside and that’s not surprising being as not only has he yet to turn 21 years of age, he also only started 23 games at Miami which included him only playing roughly 65% of all defensive snaps in 2015.

Here’s something to think about. Had Burns returned to Miami for his senior season, would he had ultimately been considered a universal first-round lock next year? Chances are good he would. Heck, despite what I might think, several major media draft analysts already considered him a first-round lock this year after he recorded six interceptions and 13 total passes defensed during the 2015 season. Make no mistake, Burns faced some quality competition last year as he played against Florida State, Clemson, Duke and North Carolina who all at what time or another were ranked teams. Against those four opponents Burns allowed 8 receptions for 85 yards and no touchdowns on 16 targets. He also recorded 15 total tackles and 3 defensed passes in those four games.

While several are bemoaning the Steelers being unable to draft Houston cornerback William Jackson III due to the Cincinnati Bengals taking him one pick before it was their turn on the clock Thursday night, let’s not lose sight of the fact that had he come out after his junior year that many would have likely considered him a day-two prospect. Jackson made tremendous strides last year and his decision to stay in school wound up being the right one and solidified him as a universal first-round prospect. It’s worth noting that Jackson will also turn 24 in October.

While Burns won’t be spending his senior year at the University of Miami, he will be spending it at Steelers University with his classes set to begin next weekend at the team’s rookie mini camp. Is Burns likely to contribute much on defense during his rookie semester? Chances are good that he won’t during the first half of the season and we’ll have to wait and see what the second half holds for him. With that said, Burns has a better chance of progressing faster toward his ultimate ceiling at Steelers University than he would at the University of Miami.

“As we always say with the junior kids, we’ll get him for his senior year,” Steelers general manager Kevin Colbert said Thursday night after selecting Burns. “We’ll work with him. I know Coach [Mike Tomlin] is excited. He likes to get those young guys and take them and mold them into what we need.”

Being as Burns was drafted in the first round, the Steelers will eventually have the right to exercise a fifth-year option that will come with his rookie contract. That could wind up being a big deal, or maybe not, because should he progress the way the organization likely hopes that he will, I can see them trying to lock him up to a long-term extension at the end of his third season at an affordable, yet fair, average per year.

Sure, the Steelers could have passed on Burns for a defensive player who had a better chance of contributing immediately, but with that said, there weren’t any cornerbacks remaining on the board that fit that criteria, in my opinion. Could they have traded down several spots with the Denver Broncos and still landed Burns? While we’ll never know for sure, it’s important to remember that the Kansas City Chiefs, Arizona Cardinals and Carolina Panthers all need young cornerbacks and all three were scheduled to pick prior to the Broncos.

A lot of the fan base have been hollering for some time now for the Steelers to finally draft a cornerback in the first round and now that has happened. While Burns is unlikely to start immediately now that he’s in Pittsburgh, you can bet he will in 2017 by the latest. Should his senior season at Steelers University benefit him as much, if not more than Jackson’s final year at Houston, it will become very clear very quickly as to why the team “need-reached” for him in the first-round this year.

Welcome to Pittsburgh, Artie, I hope you brought plenty of No. 2 pencils as school will be starting soon.