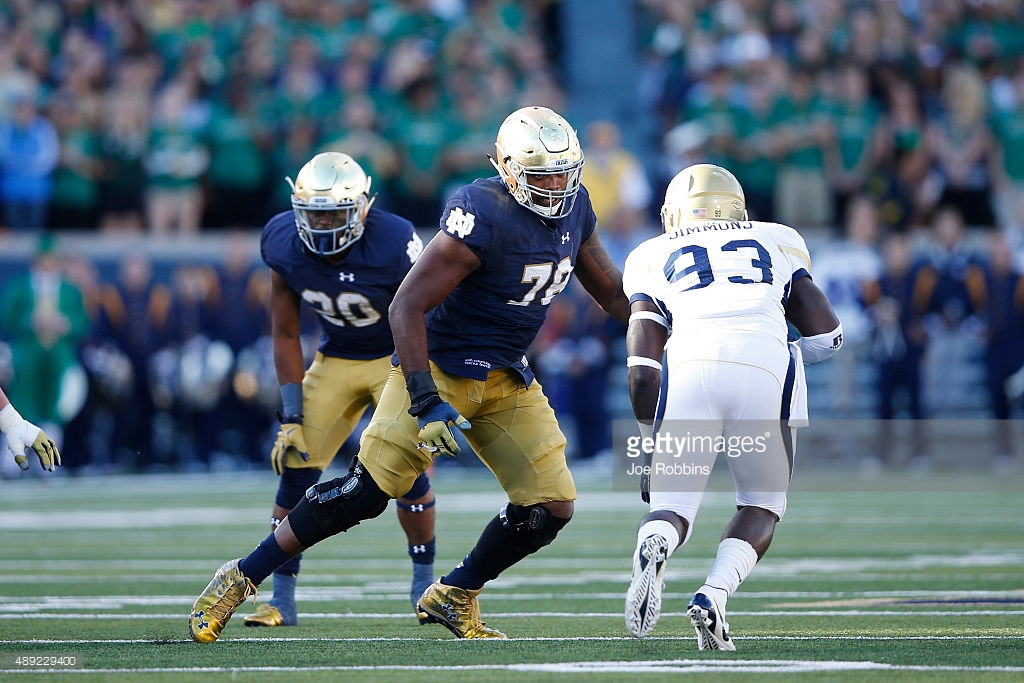 If Joe Flacco is truly an elite quarterback, it will be crucial for the Baltimore Ravens to protect him. That starts on the offensive line, and that starts with newest Raven Ronnie Stanley, chosen with the 6th overall pick. An offensive tackle out of Notre Dame, Stanley started 24 career games for the Irish at left and right tackle.

Projected by most as the second-highest offensive tackle on the board, Stanley benefited in no small manner from the precipitous Thursday-night plunge of Laramy Tunsil. Tunsil, who was impacted by a video posted to his Twitter account of him in high school days smoking marijuana, slid to 13 and the Miami Dolphins. Stanley may have been a surprise top 6 selection, but there’s no doubt that he doesn’t lack for talent.

Stanley is a balanced offensive lineman, with ability to run and pass block equally. He is more polished than his classmate Tunsil, and while he doesn’t have that same freakish athletic value, he is pro-ready. His 6’6″, 312 lb frame with 35 5/8″ arms allows him to gain physical advantages, and his technique is sound. Expect him to start across from Eugene Monroe in his rookie season, although side undetermined as yet.

In the AFC North, to keep pace with the physicality, you will need to build nastiness in the trenches. Stanley is aggressive and strong at the point of attack, with the grit to win difficult matchups. He’s a smart player, too, with a well-refined footwork base that allows him to work angles against oncoming edge rushers.

That said, Stanley does have his weaknesses. He lets rushers into his chest far too often, and will fail to drop his anchor against power rushers, getting himself slid backwards. He was far too over-reliant on his sheer athletic ability in college, and as a result his technique suffered. A college “dancing bear” (to use a Mike Mayock expression), Stanley will need to refine himself at the next level to find early success.