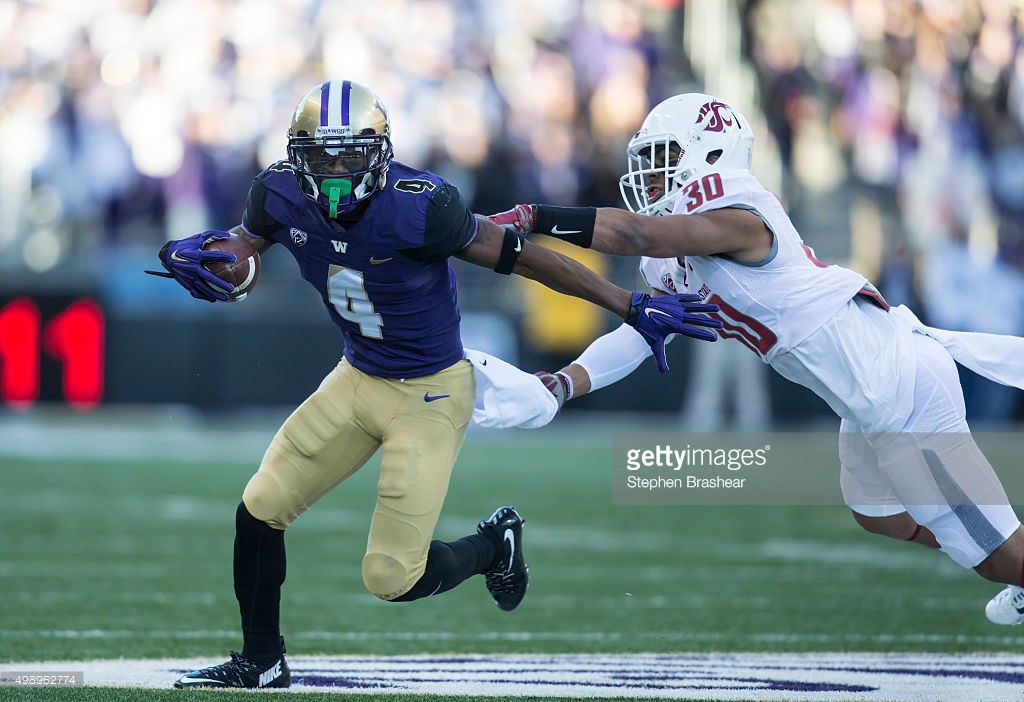 -Thin, wiry frame for position
-Can be bumped off of routes with ease by physical corners that get hands on him
-Very short arms, which limits his catch radius
-Doesn’t have much play strength due to maxed out frame
-Limited route runner who seems to struggle with attention to detail in area

Washington senior wide receiver Jaydon Mickens is a fun player to watch on him, simply for what he does with the football in his hands, but outside of that there’s not much to work with at the next level with the 5-foot-11, 190-pound receiver who has significantly short arms (29 1/4 inches) and small hands (8 7/8 inches) for the position.

Profiling mainly as a slot receiver at the next level, Mickens is going to need to put a ton of attention on his route running, which is well below average and has zero deceptiveness to it.

That being said, Mickens is an explosive athlete with tremendous feet. Adding the quick feet to a guy like Mickens with his explosion in the open field with the ball in his hands is scary, but he’s far too raw as a receiver. That’s overly concerning for a senior who has seen significant action over the last four years.

In the short-to-intermediate areas of the field, Mickens is a pass-catching threat who can take short passes and turn them into big gains with his shiftiness in the open field.

In the clip above against Arizona in 2014, you can see the explosiveness in and out of cuts by Mickens, and he has great vision in the open field for a receiver.

Mickens has instant quickness and certainly makes you sit up in your chain when watching film, but at times he a better athlete than football player.

That’s pretty evident in the clip above.

Outside of the short-to-intermediate area, Mickens can be a vertical threat due to his explosive speed off the line, allowing him to close ground on defenders quickly before racing past them into the secondary.

In the first clip against Arizona in 2014, Mickens gets a free release off the line and blows past the defender up the seam.

While it’s an easy throw for his QB, what stands out is the work Mickens does with the ball in his hands. He’s decisive and gets to top speed quickly once the ball is in his grasp.

That’s what I love about him. He knows his limitations, but he looks to simply run away from people.

Although the ball does come out at the end, he was ruled down on the play. That shows his limited play strength though as he’s overpowered in that area, which is a cause for concern.

In the second clip, Mickens again gets vertical quickly, but what I absolutely love about this play is the hesitation with the ball in the air, roping the defender in before bursting past again to create that needed separation.

He might not be the biggest or most physical receiver, but he’s certainly in tune with his body in space and just has a knack for making plays.

Not only is Mickens a threat as a receiver with the ball in his hands, but he has speed for days that allows him to turn the corner quickly on jet sweeps.

Against Oregon State, the Beavers simply had no answer for the diminutive receiver once he got his hands on the ball.

There’s no need for him to dance on this play. He received great blocks on the edge and simply turned the corner and hit the afterburners.

Adding to his resume, Mickens has a nice aggressive side to him as a blocker, often powering into defenders his size looking to move them off their spot against the run.

While it’s nice to see him come off the line looking for a big shot on the corner, he simply doesn’t have the play strength to do anything with it. I love that he’s willing to mix it up as a blocker, but he needs to hone his technique as a blocker since his strength doesn’t help him much in this regard.

Here’s another look at Mickens blocking.

Granted, that’s against an Oregon linebacker, but that’s ugly. Mickens gets tossed to the ground like a ragdoll, allowing the linebacker to make the play near the line of scrimmage.

Again, I admire the will to put in the work as a blocker, but sometimes he just doesn’t have the strength or weight to hold up around the line as a blocker.

Overall, the explosiveness and “wow” factor Mickens brings on every snap is fun to watch on film, but projecting him as an NFL player is very hard due to his lack of technique as a route runner, limited catch radius, small, wiry frame and lack of play strength.

If the senior receiver had experience as a returner I could see him sticking on an NFL roster for a few years while he learns his craft all over again, but it’s hard to see him in the league past training camp.

The practice squad is an option for him, but with his demeanor as a competitor, who knows if he’d be willing to go that route.