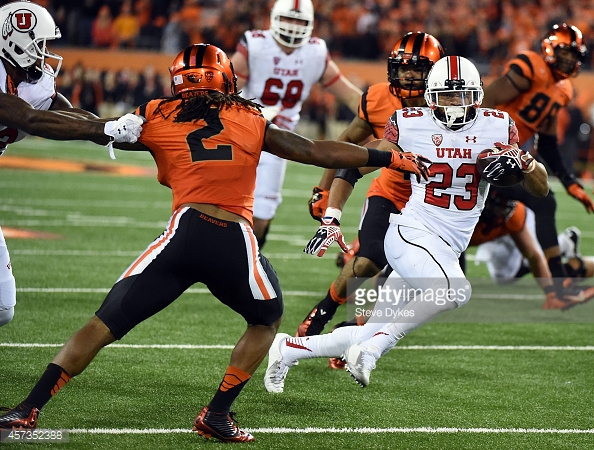 -Balanced, physical runner who is tough to bring down on initial contact
-Good vision for position and sets up his blockers well
-Consistently falls forward at the end of runs
-Legs keep churning through contact, rarely dances
-Patient runner, but decisive and quick when hitting holes
-Glides when cutting, smooth runner
-Good hands and feel for pass-catching role

-Failed to qualify at Washington State and Fresno State before heading to American River College for first two years
-Rushed for 2,773 yards on 560 carries (21 TDs) during two years at Utah
-Added 80 receptions for 624 yards and two scores
-Missed end of season due to torn right meniscus and missed Combine

Utah’s Devontae Booker was a standout bell cow through two seasons as a Ute, averaging nearly 340 touches per year.

The production he put up at Utah is impressive, and when you watch the film you can see why he was so successful for two straight seasons, deserving to be in the top 5 running back conversations.

Weighing in at 219 pounds, Booker is a work horse who loves to initiate contact with defenders while also utilizing some impressive balance, cuts and vision for the running back position, allowing him to pick apart defenses for extra yards.

Booker is far from the biggest running back and far from the fastest, but he is a well-rounded back that is good — not great — at most things.

This run against Washington State in 2014 is one of my favorite runs from Booker.

He’s able to run through arm tackles to start the play after knifing through the line, but then you see the vision and ability to be patient and set up blocks, allowing him to go in for the score.

He’s not a flashy player by any stretch, but he’s just a solid runner overall. You’ll look up late in a game and see he has over 100 rushing yards and two scores and not even realize it.

That’s all fine and dandy to me; the guy produces consistently.

In the clip above you see the determination and power from Booker, who refuses to go down without a fight while falling forward for extra yards.

He’s a load to tackle, usually requiring two — and sometimes — three defenders to get him to the ground. I’m also positive that I didn’t see a single run from him where he went down on first contact.

Again, another run where Booker fights through an arm tackle and then requires a swarm of defenders to bring him down. You don’t have to be the biggest or fastest running back, but if you’re going to fight through contact on a consistent basis and keep those legs churning refusing to go down to the ground, you’re going to have a nice career.

That’s the path that Booker is on.

On this run by Booker you see the patience, vision and ability to again set up his blocker, all while waiting to burst through the line for the big gain.

Most of his runs feature him barreling straight ahead looking to plow through would-be tackles, but this run was special.

He’s not much of a dancer behind the line, but the patient and subtle jab steps gave his offensive linemen just an extra second or two to set up the blocks perfectly, providing Booker an open lane into the secondary.

Although this is a great run, you see the speed limitation with him as he’s caught from behind. That’s slightly concerning, but you can’t ask a muscle car to turn into a sports car.

Despite being known as more of a power back, Booker flashes signs of elusiveness.

Booker should have been dead to rights behind the line of scrimmage, but he’s able to slip under the tackle before then having the vision to bounce it to the outside for the touchdown.

He’s a smart, savvy running back that has a lot to like about his game.

The only real issue I have with his game is his pass blocking.

Despite having a strong, functional lower half that allows him to power through tackles, Booker simply doesn’t utilize it in pass protection, often catching the defenders and looking for a stalemate.

With his power and explosiveness in his lower half, I’d love to see him attack and take the fight to the pass rusher, instead of waiting.

On this play he’s simply driven into the quarterback, making for a wobbly pass that fortunately falls harmlessly to the turf.

He’s certainly strong enough and willing to take on rushers, but I want to see him do a better job of utilizing his powerful lower half on a consistent basis in this area.

Overall, Booker is not going to be one of those running backs that makes you say “wow” all the time, but what he will be is a consistent running back that — in the right system — should will be a bell cow for whichever team drafts him this weekend.

He’s currently my No. 5 running back. He’s a guy that offers everything you want from the position, and should haul in at least 30 passes a season out of the backfield in a starting role.

There’s not a lot to dislike about his game and he’s certainly one of the more well-rounded backs in this class.