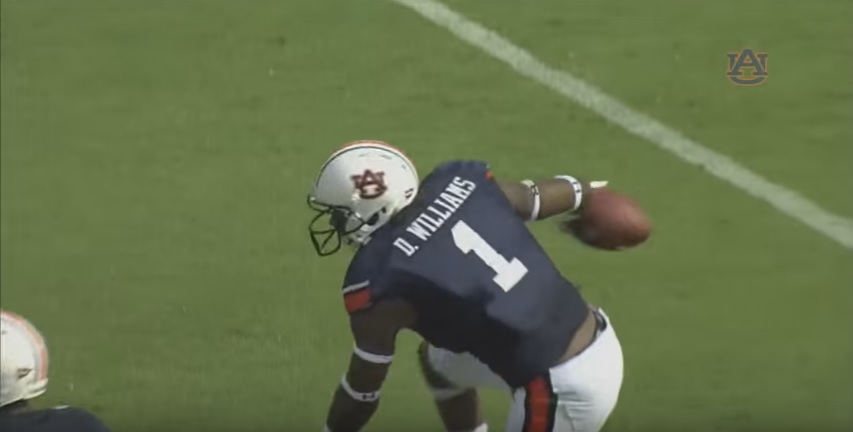 – Excellent catch radius, adjusts outside body to snag balls
– Gets head around and hands up, expecting passes
– Monster running inside-breaking routes (slants, posts, shallow crossers), can sell play-action well by jogging a step or two before exploding inside
– Loves gaining ground after the catch, sells out for extra yardage
– Bounces off hits
– Has diverse route tree, including some double-moves
– Possesses good footwork

– Low-effort blocker, too ready to abandon run plays (throws his hands up after about three seconds expecting a holding call)
– Ball security issues, needs to tuck high and tight
– Needs to learn when to get upfield and stop running east/west
– Dismissed from Auburn football team for undisclosed violation of team rules, suspended for 2014 Outback Bowl and start of 2015 season
– Doesn’t have deep speed (4.72 40 at combine)
– Will go through drop streaks

I really like Williams’ vertical route here. Keeps his shoulders and head squarely downfield selling the fly route before dropping the hips and running the post. He gets his eyes around looking for the ball immediately, and the ball is placed behind him (presumably to lead him away from the shot from the single-high safety). He makes a great adjustment in the air for the catch and absorbs the hit.

In terms of route running, this is just too slick. Williams runs a “sluggo” (slant-go) route against Danzel McDaniel, a prospect who I like in his own right, but well out of position here. Williams’ stem inside is tight and tidy, and he brings his head and shoulders around to sell the slant. But then bam – foot goes into the ground and he comes across McDaniel’s face. Just too much for the defensive back to handle.

Coming right back to that skinny post, Williams runs well to space. Before, the free safety was oriented over the hash and stayed there, but this time he pinched to the sideline. Williams does a good job of finding open grass and making himself a target, again. He doesn’t really have the speed to get away from the defensive backs, but enough speed to pick up a sizable gain out of it.

Williams doesn’t offer a lot on outside-breaking routes, but on inside-breaking routes, he’s willing to go up and get it. Again, that catch radius comes into play here, as he goes up and gets it. He effectively made a college career out of running the skinny post, which is all well and good considering he knows how to run it, but makes projecting his ability of other routes difficult at the next level.

Usually, Williams lined up on the line in the slot, where defenses would swing a high safety over him, so he didn’t see a lot of press coverage. Here, we get a rep in press coverage on 3rd and 7 split out by himself, a perfect opportunity to see what he’s capable of. For a big receiver whose normal weapon in defeating bump-and-run coverage at the line would be his size, Duke has remarkably good feet. He gets the corner to flip his hips outside initially, and an inside slant from there is easy pickings. Impressively nimble footwork for the big man, showing he can do it all to get off the line.

Williams is a quarterback’s best friend. Inside leverage from the slot? Nick Marshall puts it on him back shoulder outside. There’s not a lot you can do to defend that, especially when you have three defenders in the area on what was probably a busted route combination.

There’s not really doubting what Williams can do on the football field. He’s aggressive at the catch point with a filled-out route tree and good footwork. When it comes to 2014 tape and production, he’s undoubtedly a solid Day 2 receiver. The rest of the issues come in when you pop on his lackluster 2015 tape and take a look at his off-the-field problems.

Those issues have never been announced publicly so far as I know, but they were enough to earn him multiple suspensions and eventually get him kicked off the Auburn football team. There’s not really any getting around just how serious that is, and how damaging that is to his NFL prospects. I don’t have the resources that NFL teams do, but you can bet they’re digging deep into his background to find out what the issue is.

On the field, Williams runs solid routes and gets after the ball. It’s a shame he’s so low-effort, since he’s actually a pretty decent run blocker. It’s more a question of “want” rather than ability, and that hinders his usefulness on runs outside to his side. Down the field, he spaces himself well, and his footwork belies his size getting off the line. The guy can play, and he looks the part. It’s ultimately going to come down to his character concerns whether he gets a late-round call or slips to being undrafted.