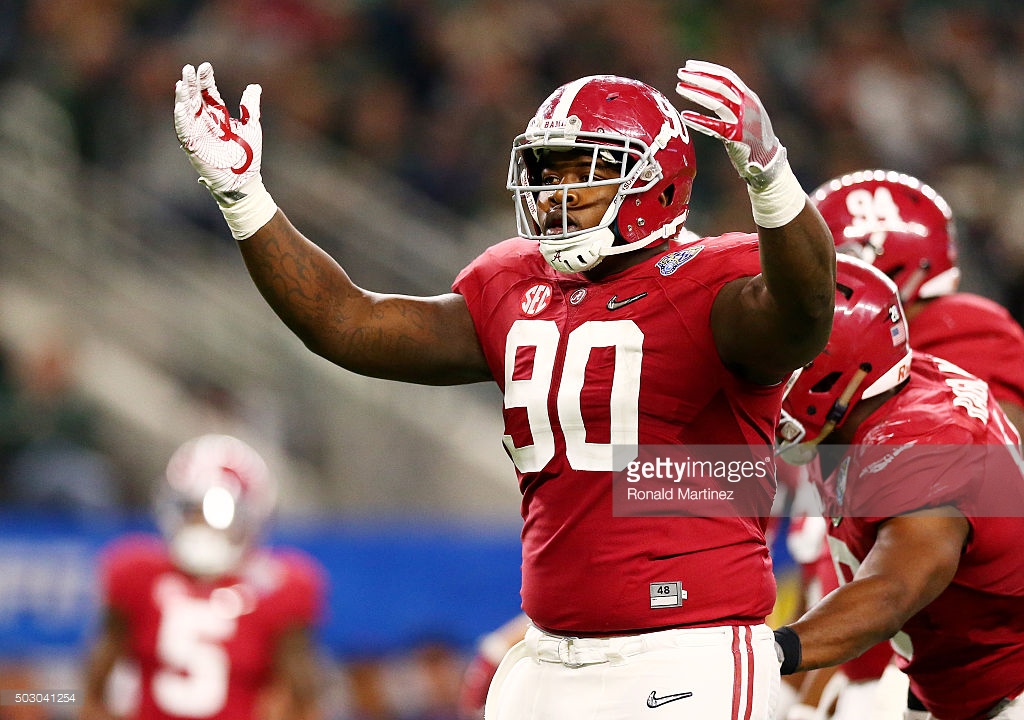 – Raw strength on bench-press of OL
– Quick swim move in space
– Sacrifices self for teammates, takes on extra blockers
– Good backfield recognition, vision
– Doesn’t get jarred off his spot
– Stands up against double-teams

– Arrested for DUI in July of 2014 after transfer from East Mississippi Community College
– 11 TFL and 2.0 sacks in 2 years at Alabama
– Chose Alabama coming out of East Mississippi CC over Tennessee, Florida, Mississippi State, Arkansas, Ole Miss, Nebraska and Kentucky
– Was 27 in the Rivals Top 100 ranking of JUCO prospects
– Second-team All-SEC (2015), All-SEC Honorable Mention (2014)
– Started 28 of 29 games in 2 years
– 8-time Alabama defensive player of the week, as chosen by the coaching staff

Reed draws a lot of double-teams on the interior. Here, he’s defeated his man, the center, with a rip move. However, when the LG engages and the C peels off, he recognizes the screen setup. Instead of fighting through the block upfield, he backs off and re-establishes his vision to find the screen target. Then, he closes downhill to join the stop. Excellent recognition of blocking tactics and philosophy to sniff out the screen. While you can debate the merits of running a screen short-side to the boundary in limited space (my take: don’t do it), you can’t argue with Reed’s recognition here.

Sometimes, Reed gets trapped in space without any idea of what to do next. Here, he lets the RG keep him at arm’s length. This is when he needs to use his 10 1/2″ mitts and jar that blocker off him. By my stopwatch, it took him 3.63 seconds from snap to cleaning his chest and getting himself freed. Chop at the arm and use your hands to burst up through it.

Although it may not look like it here to a layman, this is domination from a big man. Not every defensive lineman can be Aaron Donald and swim over an offensive lineman within moments of the snap. However, this is quietly exactly what should be done. Reed jars the C, with the RG on a double-and-release in a zone run. Reed’s initial punch knocks the C off balance and the RG is never able to get hands on him, much less either move to the second level to eliminate the box ‘backer.

The RB tries to cut back seeing the wash-down on the right side and the stack left. However, Reed manages to make a full bend and stop the cut. Not only does he flow down the line here, but he also keeps the linebacker free by not allowing a lineman to release. This is exactly what you want from a DL in his position, and is a quietly dominant play.

Reed seems to lack functional strength on many pass rushes. Here, he stands up the RG but gets no movement. The C has his eyes on Reed, but ends up sliding across to help the LG. Reed doesn’t manage any movement on this, like unfortunately so many other pass rush reps. He’s the kind of guy you want clogging up the middle of the pocket containing the QB, but he’s never going to be a top-notch pass rusher capable of getting to the passer quickly.

Here, Reed has one of his few counter move recognition rushes. He tees up on the RG, extends and creates space for himself. His swim move takes him to QB depth, and he just has to adjust to make the hit. This is an unusual pass rush rep for him considering how well he creates the move once engaged. Normally, he is unable to improvise once the ball is snapped.

Engage low, finish high. Reed is able to blow through the blocker here with his eyes in the backfield, meaning he’s in position to make the stop. The violent disengage leaves him able to close on the RB in a phonebooth to make the tackle. How do you get off the field on third and down? It starts with run stuffs like this on first and second.

He may not always be in the backfield, but he is stout and never gets moved off his spot. I only saw him get pushed off the LOS a handful of times. He’s even adequate at lateral movement, meaning he can string plays out. Although he’s not the one making the splash play against the run, he’s the one quietly doing his job and sucking up blockers and space for teammates to clean up.

Discipline above all is the key for Reed. If he tries to slant or play outside the system, that’s when he ends up attempting moves that are beyond his abilities. He lacks any true pass rush moves, and for the most part didn’t actually need any in college with his strength and sturdiness.

The question becomes, where do you take a guy like Reed? He could step in from the first day of training camp and immediately be one of the best run defenders in the NFL. The problem is, you’re probably going to have to take him off the field on third down unless you want him just to chew up the middle of the pocket. He doesn’t offer much upside or ability to get after the passer, and that’s becoming increasingly pivotal in the NFL.

Would you take a defensive lineman like Reed (who will shut down the run but not offer much against the passing game) in the first round? Austin Johnson from Penn State isn’t so dissimilar a prospect, while less against the run and more against the pass, and I put a third round grade on him. Stats don’t always tell the whole story, but Reed’s 2 sacks in 2 years do.

Ultimately, Reed will get overdrafted because of his school and status. Don’t mistake me – he’s a force to be reckoned with, but it depends on how you value the two-down run stuffing war daddies in the NFL. I’d easily feel comfortable with him as a 0t or 1t (potentially 3t depending on scheme) going at the top of Day Two, but I don’t think I’d take him with a top 31 selection.