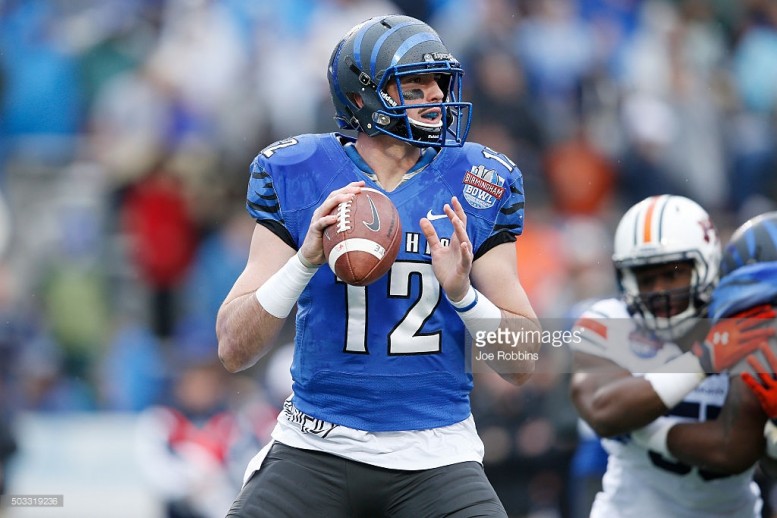 Lance Zierlein of NFL.com has already released yet another mock draft version and after previously selecting Florida safety Keanu Neal for the Pittsburgh Steelers 25th overall in his last effort, this time around he really has a quite dubious pick for them.

Would you believe that Zierlein has the Steelers selecting Memphis quarterback Paxton Lynch? Well, he does and he writes of the selection:

While the Steelers have other needs, Ben Roethlisberger can’t play forever and an opportunity to draft his eventual replacement might be too enticing for Kevin Colbert to pass up.

What’s funny about this selection is that Zierlein knows the Steelers quite well being as his father was once the team’s offensive line coach. Regardless, I would be absolutely floored if the Steelers drafted a quarterback in the first round.

Lynch, who measured in at the 2016 NFL Scouting Combine at 6065, 244-pounds, threw for 8863 yards and 59 touchdowns in college with 23 interceptions. It should be noted, however, that 10 of his interceptions came as a true freshman.

Had Zierlein written more about the Steelers possibly selecting Lynch in the first round, he probably would’ve included the fact that the team’s quarterback coach, Randy Fichter, probably already knows quite a bit about the Memphis signal-caller being as he was once the offensive coordinator at the school. Even so, that’s really the only natural link you can draw from the Steelers to Lynch in addition to the fact that the young prospect is a good-sized quarterback just like current Pittsburgh starter Ben Roethlisberger.

Lynch will more than likely be the third quarterback taken in this year’s draft and I doubt seriously he’ll be selected by the Steelers. Should that wind up happening, however, remember this mock draft.