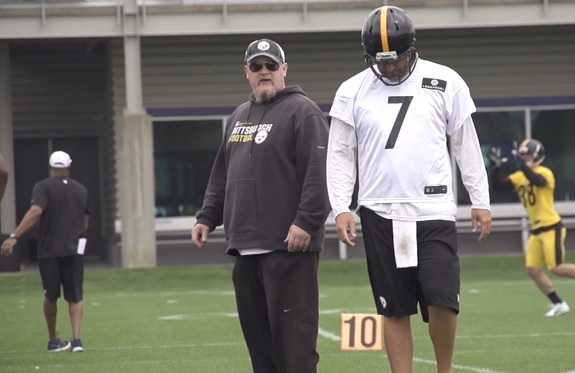 The Pittsburgh Steelers’ coaching staff seems to be camping out in the South today. In addition to sending Mike Tomlin, Kevin Colbert, Keith Butler, and Joe Greene to Baylor, they’ve also sent quarterbacks coach Randy Fichtner to Arkansas. He’s observing quarterback Brandon Allen who according to ESPN’s Jeremy Fowler, left a positive impression on the team in Indianapolis.

Steelers QB coach Randy Fichtner is at Arkansas' pro day. I heard the team was impressed with Allen's makeup at combine.

Allen’s makeup is a 6’1/3 217 pound build, though his 8.5 inch hands were the smallest of any QB there. And typically, the correlation between sub nine inch hands and success is limited.

The Steelers have shown lots of interest in quarterbacks from Cody Kessler, Vernon Adams, Dax Prescott, and now Allen. It’s feeling more and more likely the team will reinvest in the position during Day Three of the draft. Allen is generally regarded as a late round pick who could be on the team’s radar in the 7th.