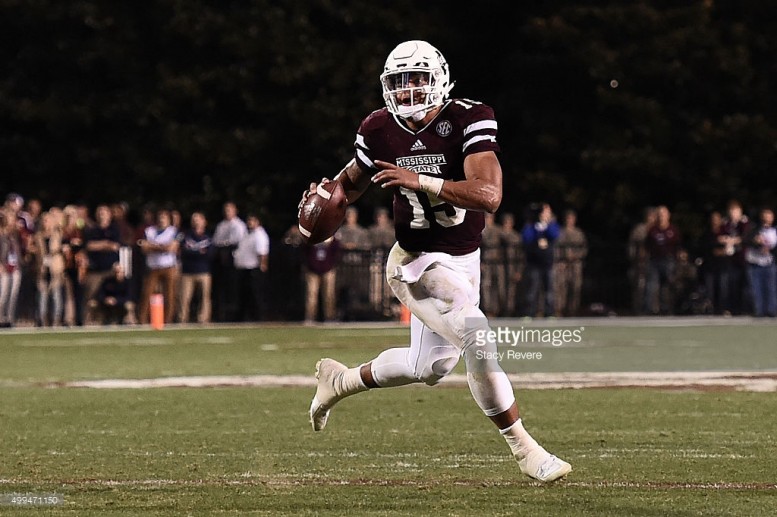 While it’s not guaranteed to happen, the Pittsburgh Steelers appear to be open to drafting another quarterback this year. During last week’s NFL combine, not only did the Steelers meet with Oregon quarterback Vernon Adams, they also met with Mississippi State quarterback Dak Prescott as well.

Prescott not only is known for his throwing arm but his legs as well as he rushed for 588 yards in 2015 and 986 yards in 2014. During his four years at Mississippi State, he rushed for 2,521 yards and 41 total touchdowns.

While backup quarterback Landry Jones did show some minor improvement last season in limited play, he is entering the final year of his rookie contract. Additionally, veteran quarterback Bruce Gradkowski and Michael Vick are both scheduled to be unrestricted free agents next week. Earlier this offseason, the Steelers signed quarterback Dustin Vaughan to their roster and he’ll be at least one arm for them during the team’s rookie minicamp.

Should the Steelers have serious interest in Prescott, one would think that they would have to draft him in the third or fourth round being as they currently don’t have selections in the fifth and sixth rounds.

Earlier on Wednesday it was reported that Prescott will be featured on Jon Gruden’s Quarterback Camp on ESPN next month.

“Prescott is perhaps the No. 1 dual-threat quarterback this year,” Gruden said recently. “He can hurt you running or passing. He’s done it in a very difficult conference, and he’s won at a place where a lot of quarterbacks haven’t. I’ve spent some time with him before this process and he’s a bright-eyed, eager, confident talent that needs to be in the right place, but he can play.”

Prescott said Wednesday night on SiriusXM NFL Radio that he will just be throwing at his pro day, as he will let his numbers from the combine stand.