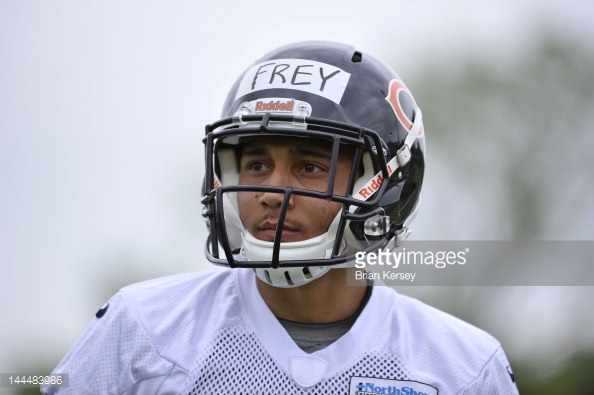 To preface, we have wrapped up all the brand-new futures’ contracts. The ones who had never been apart of the organization. To round things out, we’ll mention some of the players that came onto the practice squad late in the year but remain largely irrelevant to your typical Steelers’ fans.

Frey’s career was not the disjointed, country-tour seen with several of the players we’ve written about. He didn’t have to take the scenic route at a junior college with poor grades, and transfer again and again until he found a fit. That isn’t knocking anyone’s path; hey, they all landed in the same place. But it makes Frey’s much more linear.

And frankly, less to write about.

A National Scholar-Athlete, he was a two-time MVP at Jesuit High School in California. A weapon on both sides of the ball, he racked up 37 touchdowns and 10 interceptions over his final two years. He also ran track and field, competing in the 100 and 200 meter and the long jump.

It furthered the family’s athletic tradition. A dad who played football at Arizona, an uncle who spent time on Hawaii’s basketball team.

You know I’m against highlight reels but for fun, since it was eight years ago, here’s a mashup of Frey’s high school highlights, set to a funky yet generic sountrack you’d hear out of a Fast and Furious movie.

With interest from a couple FBS schools, and offers from a ton at the FCS level, Frey ended up at Nevada. Thrust into action immediately, Frey dressed for every game his freshmen year, recorded his first start, and finished up with 23 tackles.

He would be the full-time starter his sophomore year and for the rest of his college career. After recording just a pair of picks in his first two years, Frey exploded in 2011, his senior season, with five. He was named First-Team WAC for his efforts.

Frey timed well at his Nevada Pro Day, a 4.45, though his vertical and broad were average, 32.5 and 9’11” respectively. The Chicago Bears snagged him in the 6th round, the highest selection of anyone we’ve profiled, in 2012. He made plays on the ball, picking off David Carr in the preseason of his rookie year. After getting cut and living on the taxi squad, he returned in 2013 with similar results.

Football Nation recounts the impact Frey had in camp.

“Frey deflected more passes than any corner in camp and he has become a real threat to veteran players.  The highlight during training camp came from an intercepted catch thrown by quarterback Jay Cutler, causing head coach Marc Trestman to take notice.”

This wasn’t just your hollow, feel-good story. Frey made the Bears in 2013, started six games, racked up 47 total tackles, all despite playing part of the season with a fractured finger.

2014 was initially not as kind and Frey didn’t even make it to the 75-man roster, cut in August. A nagging hamstring injury caused him to miss three exhibition games, undoubtedly playing the lead role in his early release.

He hung out on the practice squad, was recalled in late September, and saw action in three games. Frey made the most of it, forcing a fumble against the Carolina Panthers.

Tampa Bay scooped him up in mid-October and he saw time in eight contests, recording 16 tackles, while logging 133 snaps on defense, according to Football Outsiders.

The Bucs cut him in camp this year, signed him back to the practice squad early into the season, though released him into the water less than two weeks later. The Steelers signed him on October 27th, and re-upped with a futures deal in January.

Though most people will think of him as just another irrelevant name, Frey has made a relatively large mark in the NFL. More than practically anyone else named in this series. With the Steelers depth at the position not exactly intimidating, there is hope in a guy like Doran Grant, but not exactly trust.

Frey could turn heads, just as he did in 2013 with the Bears. The NFL stage isn’t foreign nor does it appear too big for him. He’s well-traveled, competed, and had moments where he’s stuck in the league.

Maybe this is the team’s sleeper. A deep sleeper considering no one is talking about him. Maybe by the end of camp, they will.