The Pittsburgh Steelers are making their mark in the South today. They’re in Houston, as Dave wrote about. And they’ve also sent a scout to Jackson State, according to local reporter Chris Hudgison.

Cornerback Robert Porter appears to be the biggest draw from the school. A two year starter, Porter picked off two passes in his career, including a 41 yard pick six in 2014. The 6’0 188 pound corner had 12 pass deflections in his senior season. He transferred in to JSU from a junior college.

Outside linebacker Tedrick Terrell racked up 9 TFL and 6 sacks while forcing two fumbles.

Delta State and Mississippi Valley also sent prospects to work out, according to Hudgison. Safety Jon Knox is the biggest name of the group. He picked off three passes for Delta State in nine games.

However, age is going to be a major issue for him. By the time camps begin, he’ll already be 28. His career started at Georgia in 2007, lasting two seasons and a stint that included two starts, before transferring to a JUCO in 2009. He didn’t show back up on the football radar until 2014 with DSU for unknown reasons. 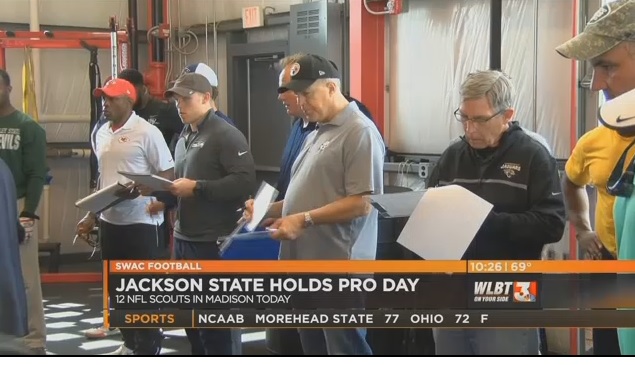