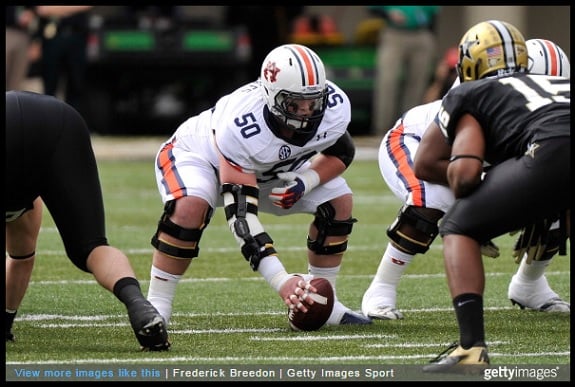 Undrafted rookie interior lineman Reese Dismukes was just one piece of a small but impressive cache of intriguing undrafted rookie free agent signings along the offensive interior. While he was not the most coveted—B.J. Finney, who is the only one who made it to the practice squad for an extended period, received the biggest signing bonus—he was the most decorated, having earned the Rimington Trophy in 2014 as the nation’s best center.

In spite of his accolades, however, seven rounds of the draft passed by without him being picked up by a team, in part due to the fact that he is on the light side to play at the professional level. Still, the Steelers have some experience with undersized linemen.

In fact, the team gave Dismukes a ton of work throughout the offseason and through the preseason, giving him a significant amount of work at center, which only increased after injuries occurred at the top of the depth chart, sometimes even pulling double duty for multiple line groups.

Unfortunately, that work wasn’t exactly all that impressive, and as Alex Kozora noted, he struggled mightily with even the most basic duty of the center position, which is snapping the ball. He was a part of a concerning number of botched snaps during training camp, and then that carried over into the preseason as well.

Likely in part due to the sheer number of injuries that the Steelers dealt with during the preseason, Dismukes actually did make the initial practice squad before he was released a couple of days later in favor of an outside offensive lineman who was not a part of the team, nor more pedigreed.

It’s noteworthy of course that Finney was injured at the time and likely would have been the initial practice squad choice and lasted there all season. Instead, he was added to the practice squad when he got healthy. Dismukes actually spent time on the Panthers’ practice squad and was signed to a Reserve/Futures contract after their Super Bowl loss.