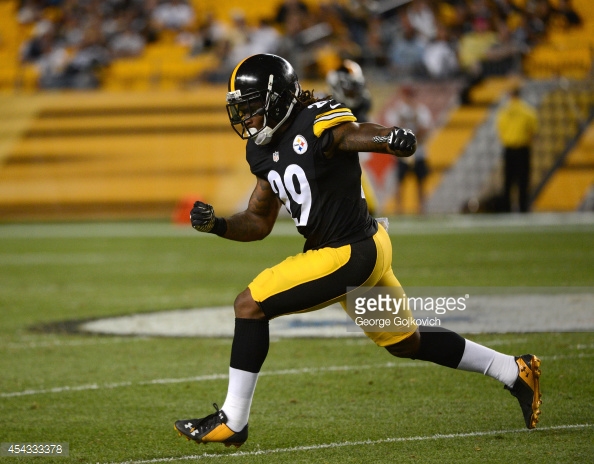 Disappointment and failure opens up a couple of different avenues one can go down. For some, letting yourself and those around you down often leads to a downward spiral, out of which there is no chance to reach the heights of the goal you once strived for. For others, that let down can be the stepping stone for self-improvement, and that seems to be the path forced by fourth-year Pittsburgh Steelers safety Shamarko Thomas.

Thomas recently spoke to Teresa Varley for the Steelers’ website about his experiences last season, during which he was in line to enter the starting lineup, and practice as a starting safety throughout training camp and during the preseason, only to lose his starting spot to veteran Will Allen by the time the regular season rolled around.

Not that he was done a disservice, by any means. In line to replace future Hall of Famer Troy Polamalu in the starting lineup, the former fourth-round draft pick displayed several mental lapses during the course of the Steelers’ preseason games that hinted strongly that he was not prepared to enter the starting lineup.

I do not expect, however, that many, including he, holds the belief that he will be given an immediate chance at redemption when one considers that when he was demoted from the starting lineup, he was also leapfrogged by Robert Golden—and when Allen missed three games, and parts of others, it was Golden who filled in to replace him.

The road for Thomas back to a role on defense could be a long one, then, but while it may take him a while to get back there physically, he is preparing to be a contributor mentally, telling Varley that he “grew a lot mentally this year”:

“You expect to be a starter and fight for the position”, he said. “When you lose it it’s mentally and physically draining. I kept my spirits up. The mindset for me was to stay positive and keep fighting”.

One of the ways that he has been able to keep his spirits up through the disappointing season has been to stay in touch with Polamalu, with whom he forged a personal relationship over the course of the 2014 offseason, training with the veteran safety out west. Thomas credits the former All-Pro for teaching him a great deal both about football and about life, and views him as a mentor.

Already eager for 2016, the special teams ace has been spending time reviewing all of the previous season’s film, back to the preseason, concluding, in his words, “I didn’t always look like myself”. Thomas believes that trying to replace Polamalu led to him trying to be “perfect”, and that “working and focusing on being perfect, I wasn’t playing up to my abilities.

He intends to return to a more relaxed play that he showed in his first two preseasons, where his instincts allowed him to make plays on the field. “I need to work my butt off until I get to the top. That is my mindset”. And it’s the one he’ll need to reach his goal, which might seem lofty from where he currently sits.