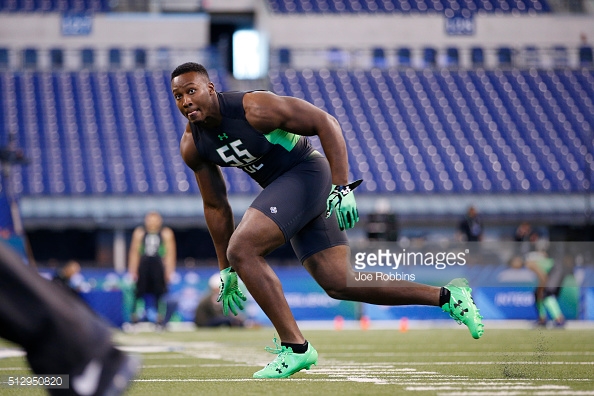 He’s one of the most debated players in this year’s draft. And one the Pittsburgh Steelers appear to have interest in.

Noah Spence told Draft Wire and Depot alum’s Jon Ledyard that the team has “shown a ton” of interest in the pre-draft process. However, the Steelers are not currently one of seven cities Spence is scheduled to visit next week. That doesn’t mean a visit won’t happen, Kevin Colbert said at the owners’ meeting teams have to get in line to schedule, and he’s definitely a player worth monitoring.

After an impressive Senior Bowl, Spence had slightly disappointing Combine and Pro Day numbers. Still, his ability to win the edge in a weak class makes him a near-lock to go in the first round, even if his checkered history is the major red flag whenever you mention his name.

He is no lock to make it to 25, and would have to suffer a Bud Dupree like fall, but questions about his off the field and run defense would be the likely catalysts for him to drop.

We’ll follow up if an official pre-draft visit takes place. You’d think if the Steelers were to be a serious contender, they’d bring him into town. So far, five of their six official visits have been in the secondary. LSU offensive tackle Jerald Hawkins is the lone exception.