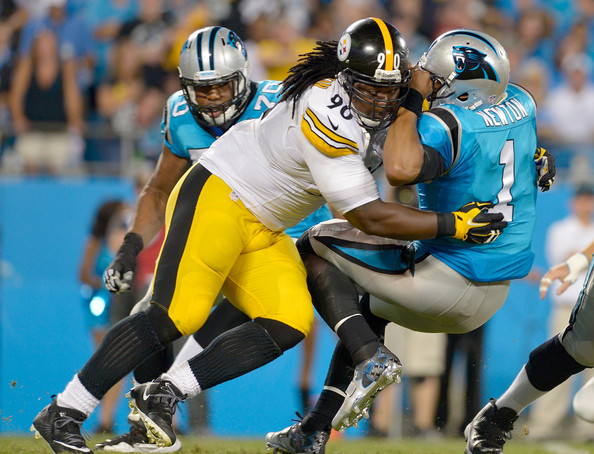 As I wrote yesterday, the first of the Pittsburgh Steelers’ free agent dominoes were likely to fall very soon, as early as that day, and in fact we saw two of them go down. Not only did free agent tackle Kelvin Beachum quickly get a deal done with Jacksonville, veteran nose tackle Steve McLendon also found his way to New York to play for the Jets, who had a hole at the center line.

And now the Steelers have a hole at the same position. But the Steelers don’t use that position as much as the Jets do, nor do they use it nearly as often as they used to, and that was ultimately the sticking point between the team and McLendon, he of 30 years of age.

For McLendon, of course, it makes perfect sense. Breaking into the league in 2009 as an undrafted free agent without a real position, he gradually began to make a dent by making the practice squad, and then bounced between there and the 53-man roster before he finally began to earn playing time.

During the 2011 and 2012 seasons, he was beginning to carve out a reputation for himself more so than a niche, and many believed that he deserved to be playing more than he was. That offseason, the Steelers gave him a three-year contract and moved him into the starting lineup at the age of 27.

That modest contract was just enough to satiate the restricted free agent, but it was at the same time that the team was also beginning to transition away from the nose tackle as a base defense position, a reality that was make clear this past season under the new defensive regime.

So with McLendon hitting the market for possibly the last time this offseason, it made little schematic or financial sense to remain in Pittsburgh when it seemed obvious that he would not log a great deal of time in the nickel defense either. That would also translate to less money. The Jets had a hole to fill after they lost their own starting nose tackle in free agency, and were willing to give him, reportedly, $4 million per season.

Much as it may sting a bit, however, the move also made sense for the Steelers, who would simply not pay that sort of money to a nose tackle—which, admittedly, feels a bit odd to say, until you remember that this is 2016, and not 2006.

Pittsburgh was clear in its desire to keep McLendon, but also in its financial limitations in doing so, and they encouraged him to test his market, something that he could only do on a limited basis back in 2013 because he was a restricted free agent.

In terms of what he was able to do on the field for the Steelers, McLendon will actually be fairly difficult to replace—but in terms of the amount of snaps that they are actually losing, not so much. Even last year he managed to play just a few hundred snaps.

The preference would have been to keep him around, but it had to make financial sense for both parties, and it’s hard to blame the player for taking his minor payday when he never had a chance to hit unrestricted free agency before when he’s on the wrong side of 30.