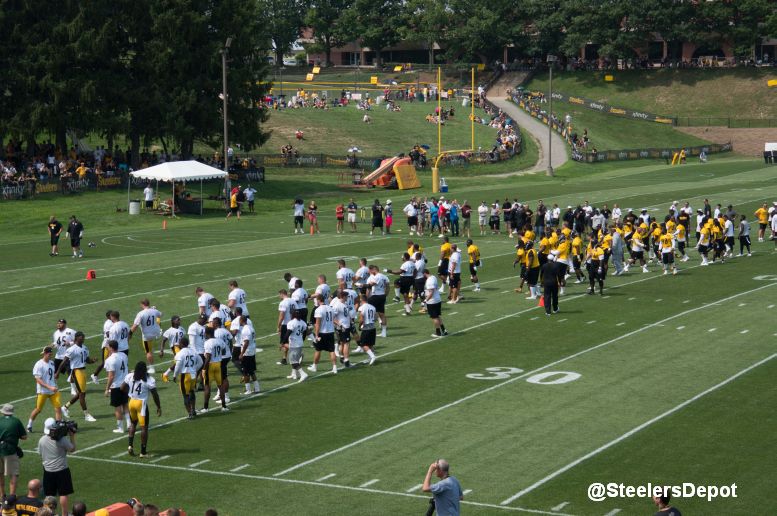 For a moment, he was the talk of camp. Little, undrafted, Eli Rogers. The wide receiver turned heads in the spring and carried it over into the summer before a foot injury ended his season before the first preseason game even kicked off.

He was still in the back of our minds going into this season and with Martavis Bryant’s suspension, the door has swung open for a player like Rogers to walk in and onto the roster.

Kevin Colbert gave a vote of confidence in Sammie Coates, the most likely and logical replacement for Bryant, but also tossed in Rogers’ name.

“We feel good about Sammie Coates,” Colbert said according to this Post-Gazette article. “And we have a kid, Eli Rogers, who, prior to getting hurt in training camp, showed some promise.”

Anytime a general manager can rattle off the name of a player who hasn’t been on the field in eight months, you know it’s somebody the team is high on.

The injury may have been a blessing for Rogers, who has written on Instagram that it was one that has bothered him since high school and finally was able to get fixed. He’s already resumed running and should be a full go come training camp, and hopefully a participant in the offseason program, too.

In four years at Louisville, Rogers caught over 170 passes for more than 2000 yards, including leading the Cardinals in receptions his senior year. He also manned punt return duties, posting a healthy 10.2 average in 2015. Terence Garvin identified him as a player who caught his eye in OTAs last season.

Here’s what I had to write about him prior to him getting hurt.

“A smooth, natural return man who can separate as a receiver and made some heady NFL plays, including my favorite of diving out for the ball, making the catch, and immediately getting upfield to run.

He’s consistently run in the first group with the likes of AB and Wheaton, getting a lot of valuable work in catching passes from Roethlisberger. He’s mostly lined in the slot but has occasionally gotten reps on the outside. His size limits his catch radius and he’s had a couple drops, like any receiver, but he gets his hands away from his body and has shown the ability to adjust to the ball in mid-air.”

Antonio Brown, Markus Wheaton, Darrius Heyward-Bey, and Coates are all locks to make the roster. But the 5th spot is wide open, giving Rogers a path to make the team. Though the team could draft a receiver, his biggest current competition is Shakim Phillips, who spent all of last season on the practice squad. The battle for the 5th spot will be one of the most open-ended battles headed into camp.