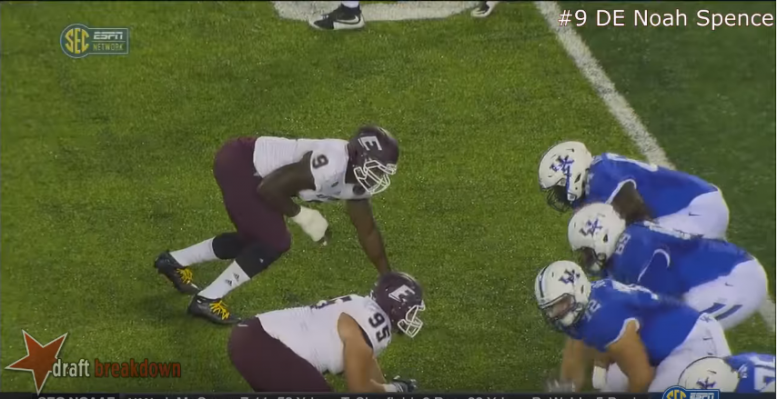 With the 2016 NFL Scouting Combine now over, NFL Network draft analyst Daniel Jeremiah has decided to release an updated version of a first round mock draft. This time around, Jeremiah has an edge rusher going to the Pittsburgh Steelers at 25th overall and its Noah Spence of Eastern Kentucky.

Jeremiah writes of the selection of Spence by the Steelers:

If Spence checks out off the field, this would be a tremendous value for the Steelers.

The book is wide open on Spence right now as most of you should already know that he was permanently banned from the Big Ten for failed drug test while playing at Ohio State. He has since attempted to turn his life around and that has included him playing one year at Eastern Kentucky where he registered 11.5 sacks, 22.5 tackles for loss and 63 tackles over 11 games.

As far as Spence possibly putting his addiction to Ecstasy addiction behind him once and for all, he talked openly about that while in Indianapolis for the combine and especially about his ongoing testing.

“I think it’s definitely huge for me. Especially with all my drug tests. (I’m) still being drug tested to this day,” Spence said. “(I’m drug tested) every week now. I was on every drug-test list at Eastern Kentucky. After I failed at Ohio State I was drug tested twice a week until I left there.”

Spence is one of those players that teams will need to take a gamble on and it could have a huge payoff. While he certainly can rush the passer, he will need to improve at setting the edge against the run at the NFL level.

There were some reports that Spence didn’t interview overly well with teams while at the combine, so take that for what it’s worth. As far as Spence possibly being the Steelers first round selection, I just can’t see it happening because of his character red flags. However, should Spence somehow fall to Pittsburgh in the second round, I could certainly see them taking a chance on him just as they did with tackle Mike Adams several years ago.