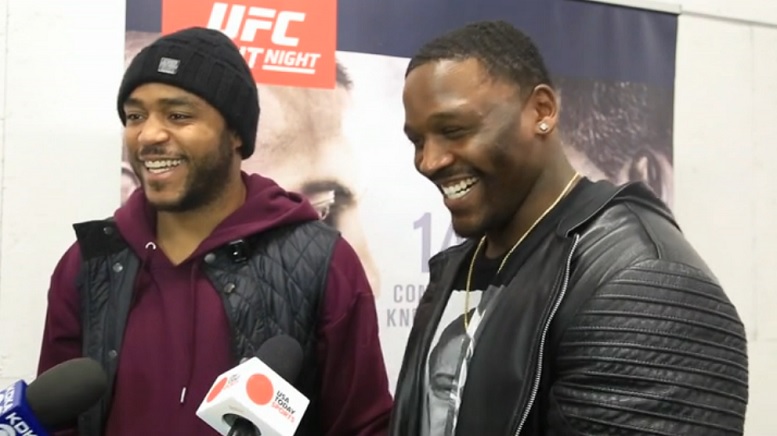 By now, you probably already know that Pittsburgh Steelers running back DeAngelo Williams and guard Ramon Foster are both huge wrestling fans. However, what you might not know is that safety Mike Mitchell and linebacker Arthur Moats are both big MMA fans.

On Friday, Mitchell and Moats were both present and accounted for at Stout Training in Pittsburgh to watch the fighters at the top of Sunday night’s card for the UFC Fight Night 83 while they worked out for fans and the media and they talked about their love of the sport with MMAjunkie.

“I always have my laptop with me on the road,” Mitchell told the site. “When there’s a pay-per-view, guys are always in each others’ rooms trying to watch the fights. I think there’s a correlation – a little bit – between football and MMA. Obviously, they’re both two very physical sports. We’re big fans of those guys, and we just met a couple guys who are fans of us.”

Moats also went on to draw some minor comparisons to MMA and professional football as it relates to the training athletes have to go through.

“The cardio aspect is the most intense part, I think,” Moats said. “In both sports, if you get tired, it doesn’t matter what skill level you have. You’re not going to be able to perform at your best. The cardio plays a huge aspect of it.”

Needless to say, Mitchell and Moats will both likely be present for the fights Sunday night at the CONSOL Energy Center in Pittsburgh that includes a card headlined by a bout between Donald “Cowboy” Cerrone and Alex “Cowboy” Oliveira. Those fights should be able to be viewed on FOX Sports 1 starting at 7 p.m. ET. As far as the main fight goes, Mitchell and Moats both took the diplomatic approach when asked who they each thought would win.

“Cowboy’s going to win,” both agreed.