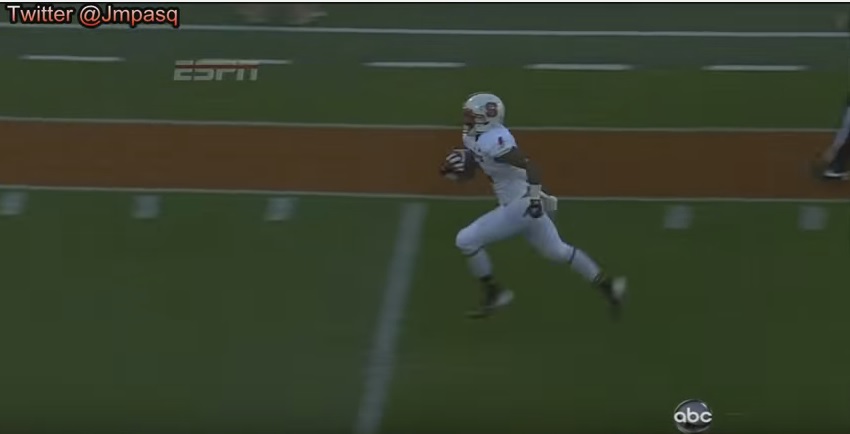 Palmer’s time with the Wolfpack was short, like his statue, but it was explosive. He played for only two seasons, catching 91 passes, but averaged 14 yards per catch and found the end zone 11 times.

He committed as a running back for the start of the 2008 season but due to poor academics, he spent two years with Georgia Military school before being able to transfer to NC State. By the time he returned, the team wisely decided to move him to receiver and redshirted him in 2010, delaying his college football debut.

But once he took the field, Palmer made an impact. In his second game, he hauled in seven catches for 96 yards and a touchdown. He ended the year on fire, putting an NBA Jam streak to shame, catching a touchdown in each of his final three games.

2012 was better if you’re looking big picture but was wildly inconsistent. It took him until his eighth game to catch a touchdown pass, but when he did, they came in bunches. He found the end zone three times against Clemson and then twice the following week versus Boston College. The Clemson game was special, averaging over 31 yards per catch, touchdowns of 29, 49, and 77 yards.

In 2012, he was named the team’s starting kick returner, impressing with over a 25 yard average. In his final game of the season – and college career – with a 94 yard kick return touchdown against Vanderbilt in the Music City Bowl.

Like 2011, he found a way to finish the year strong as a receiver and a returner, housing two kicks over the final month and scoring five times as a receiver in those aforementioned Clemson and Boston College games.

Not invited to the Combine, he blazed at the Wolfpack’s Pro Day, running a 4.39 but failed to stand out in explosion tests, leaping 33.5 inches in the vertical and 10’1″ in the broad. It led to him being undrafted but picked up as a UDFA by the Jacksonville Jaguars in 2013. He was played up in minicamp, as at least one player always is on each team, but that smoke was quickly extinguished by moments like muffing a punt in the preseason.

The San Diego Chargers picked him up next and the story was again basically the same. Ditto with the Buffalo Bills and New Orleans Saints with Palmer having to overcome the hardship of his father suddenly passing away in July of 2014, mentioned in this feature piece by Sporting News.

And now, he lands in Pittsburgh, his fifth NFL stop, still looking for his first chance to stick to a 53 man roster. His speed is interesting but in a crowded field – and the Steelers historically almost always add another receiver in the draft – and a player who has had his chances but couldn’t hang on – it’s tough to envision Palmer doing much more than the occasional splash play in camp.