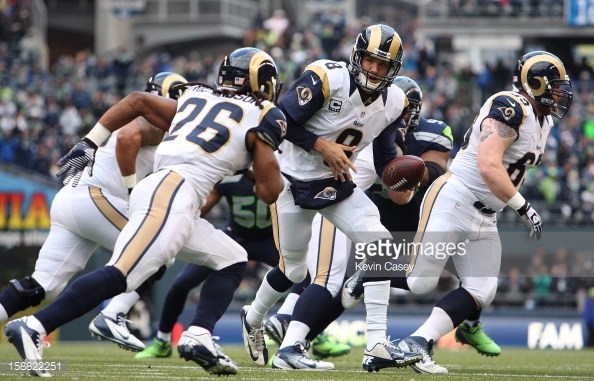 Richardson spent a year at Cisco Junior College way back in 2008, before transferring into Abilene Christian for the start of the 2009 season. It was an up-and-down career in college, ranging from a season-high 961 yards his sophomore year to 415 yards the next. 2011, his final year, was better, and on a surprisingly stacked roster for the D-II level. Charcandrick West served as his backup while Taylor Gabriel was the team’s leading receiver. They weren’t the first players from the school to make it to the NFL; Bernard Scott, who is actually Richardson’s older brother, was drafted by the Cincinnati Bengals of the 6th round in the 2009 draft.

Richardson wound up being taken by the St. Louis Rams in the 7th round of the 2012 draft, 252nd overall, one spot ahead of Mr. Irrelevant Chandler Harnish. His measurables likely got him drafted, not the relatively scant production. At his Pro Day, he turned in a 4.46 with a 40.5 inch vertical and 11’3″ in the broad, impressive numbers across the board.

Despite being an unheralded pick, he got a quick taste of the NFL in his rookie year. He surpassed 2nd round pick Isaiah Pead – who as you’ll remember, the Steelers had onboard for a hot minute this year – and finished 2012 with 98 carries for 475 yards, a healthy 4.8 yards per carry. It was downhill from there, seeing only 69 carries and 3.1 yards per carry in 2013 before getting cut loose by St. Louis.

The New York Jets claimed him the following day but released him at final cuts, carrying him on the practice squad for 2014 and offering him a futures deal for the following offseason. The Jets did the same at the end of the preseason, and he’s spent stints with the Houston Texans and Cleveland Browns before the Steelers nabbed him up a week ago.

Turning 26 in April, it’s still safe to presume he has his speed that makes him an asset. He’s an experienced receiver, too, catching 38 passes in his two years in the NFL, with similar college totals. And though it isn’t necessarily a predictive trait, you have to acknowledge the the Steelers’ pro personnel group has an eye for bringing in talented running backs: DeAngelo Williams, Fitzgerald Toussaint, and Jordan Todman. Toussaint is almost guaranteed to return, giving the Steelers’ a staple of three backs, and making it a tough fit for Richardson from a depth chart standpoint.

But there’s intrigue here because of his experience, speed, all adding up to the chance to make noise and make that room a little more competitive. And that’s what camp is all about.