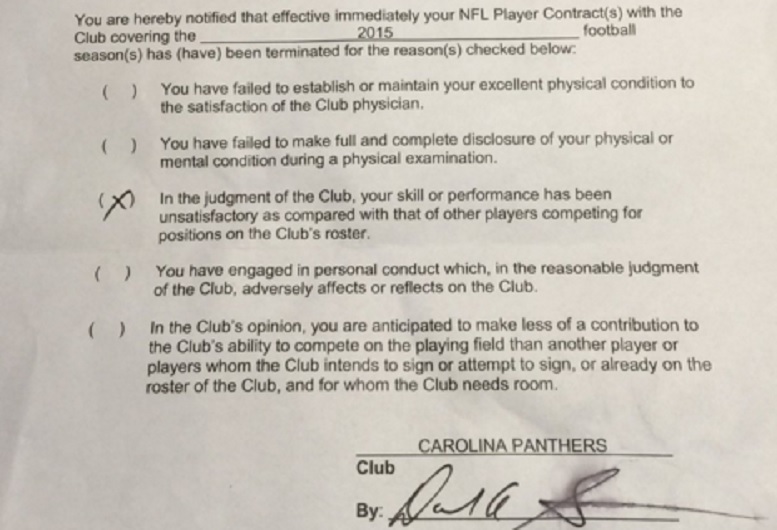 It’s been roughly one full year since word started to surface that running back DeAngelo Williams would eventually be released by the Carolina Panthers. That ultimately happened after the start of the 2015 league year and Williams quickly signed a two-year contract with the Pittsburgh Steelers. Monday morning, Williams shared the lettter he received last year from the Panthers that officially notified him that his contract was being terminated along with the reason which I have transcribed below.

“In the judgement of the Club, your skill or performance has been unsatisfactory as compared with that of other players competing for position’s on the Club’s roster.”

Well, that’s pretty blunt and as you can see by his tweet, Williams apparently keeps that letter where he can see it everyday to use as motivation.

In his first year with the Steelers, Williams rushed for 900 yards and 11 touchdowns on 200 carries. He also chipped in another 367 yards on 40 receptions. A foot injury suffered in the regular season finale, prevented Williams from playing in the team’s two playoff games. Because of that, I would say that his skill and performance was certainly satisfactory.

Assuming starter Le’Veon Bell makes a full recovery from the knee injury that he suffered midway through the 2015 season, Williams will go back to being his backup once again. Even so, the veteran running back should be used quite a bot in 2016 in order to save some wear on tear on Bell.

I am driven from within, but walking by this every morning absolutely adds fuel to the fire! #MotivationMonday pic.twitter.com/SQu8SiaN4Y