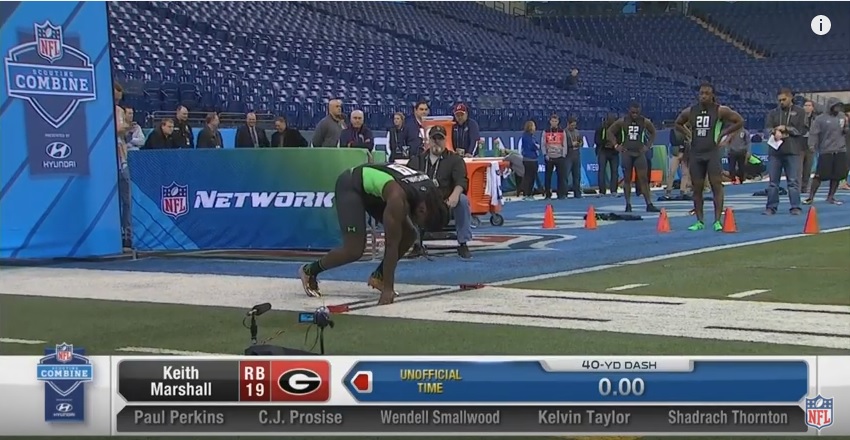 That wraps up the first day at the 2016 edition of the NFL Combine where the offensive lineman and running backs worked out today. If you missed any numbers, from weigh-ins to the 40, we’re collecting all the data right here and will continue to update throughout the week.

Tomorrow, the quarterbacks, wide receivers, and tight ends will work out.

– It’s what I wrote yesterday and frankly, anyone who followed this draft class pretty much expected. Jason Spriggs really stole the show. The tests and drills test baseline athleticism and he’s near the top of the class in that regard, maybe only behind likely first overall pick Laremy Tunsil.

Standing in at 6’5/5 301 pounds with length, Spriggs had the best 40 time (4.94) and broad jump (9’7″) of all the linemen. He was smooth in drills and mirrored with ease. Metrically, he’ll score well. On tape, he’s worse with too many technical issues for a guy with the amount of starting experience, but he did himself well today.

– Tyler Johnstone, the tackle from Oregon I’ve mentioned a couple times, had a big day. Dig the size (6’5/4 301) with about a 1.8 ten split. Showed tight hands in drills and just showed off his flexibility and lateral movement. Definitely a good first impression for someone like me, though if his tape is as good as he did today, he isn’t going to be there in the 7th like I nearly mocked him to be.

– This center class is loaded but Ryan Kelly created separation from the pack. Wrote this morning I was interested in seeing if he or Nick Martin could do it. The pivot from Alabama posted both his ten splits under 1.8 (1.78, 1.75) with an official 40 of 5.01. He’s big too, standing at over 6’4 with 33 5/8 inch arms. Big like Cody Wallace but moves a lot better, there’s an excellent chance he’s the first center off the board.

– Iowa center Austin Blythe looked poor at the Senior Bowl, but there are definitely people who are in his camp. His overall 40 times was poor but the important part, his splits, were both 1.80. He is technically sound, something he needs because he’s undersized and underpowered. Slides well, keeps his base, and doesn’t play out of control. A guy that looks like he can compete for a backup spot at the next level. Opening my eyes a little more.

– Ohio State tackle Taylor Decker was another one of those on-a-cloud prospects, who moved with little effort while maintaining his base and tight hands in drills. He had dual 1.80 ten splits, about the benchmark of what you’re looking for in the position. He, Tunsil, and Ronnie Stanley are all in that top tier.

– I wasn’t impressed by him at the Senior Bowl but I’ll give Willie Beavers credit. He looked good today. Explosive on his slide and again, a solid ten split. Mike Mayock likes him a ton but a lot of scouts don’t, so it’ll be interesting to see where he winds up.

– He won’t be the first to be called the winner of the day, and the fact he put up just 12 reps on the bench was alarming, but I like Oklahoma’s Nila Kasitati’s makeup. Big calves that create explosion, as evident by his 8’11” showing in the broad.

– I don’t mean to tuck him away here but NC State’s Joe Thuney had a solid day. I tweted earlier I need to take a better look at him. His “web” is awfully impressive and he turned in a 4.95, one of the best times for a lineman in the last several years.

– Darrell Greene from San Diego State is a thick body that can move laterally. Needs to be more controlled with his hands, they were flailing all over the place in the mirror drill, but he’s a name I’m tucking into the back of my mind.

– Two other players who moved well today. Christian Westerman and Connor McGovern. McGovern’s ten splits were great and he jumped a group-high 33 inches in the vertical.

– In my preview this morning, I wrote Vadal Alexander was stiff and slow. He continued to show that today, from poor ten splits, 1.92 both times, and looked rigid in drills.  Several on Twitter used the word “labor.” He’ll have to move to guard in the NFL but even that isn’t a guarantee for success.

– Spencer Drango dropped five pounds from the Senior Bowl to the Combine, which is good because he needed to shake that gut he had, but he still looked stiff-hipped with just average feet. Seeing a guy who has to move inside and with the variety of schemes almost every teams run, I am worried he’ll struggle being able to overtake or get to the next level on zone concepts.

– Ditto for Pearce Slater. A big dude but was very tight with poor splits and an average 8’7″ mark in the broad.

– Auburn’s Avery Young was super top heavy. Too much forward lean in basically all of his drills. Splits of 1.89 and 1.87 didn’t do him any favors either.

– Thought there were instances of Graham Glasgow and John Theus were on their toes too much in drills. Not generating enough power. I’ve seen Theus at the Senior Bowl and very little about his game has impressed me. I’m sure it doesn’t bother him, but still, don’t think he’s helped his stock.

– The highlight of the day goes to Georgia’s Keith Marshall, who clocked a 4.31. According to the NFL Network, that was the third best time by a running back since 2003. A limited body of work, just 68 carries this year, but this will get people talking.

– Northwestern’s Dan Vitale is a straight up monster. A respectable 4.6 flat for 239 pounds, who jumped 38..5 inches, repped 30 times on the bench, and jumped 10’3″ in the broad. He also showed soft hands in drills, capable of extending away from his body. He reminds me a lot of Brian Leonard, in size, testing, and game style.

– Of course, it’s hard not to go any longer before talking about Derrick Henry. We’re all talking about him but it’s worth saying a million times. For a guy to be 247 pounds to run in the low 4.5’s, jump 37 inches in the vertical, and 10’10” in the broad just shouldn’t happen. Unreal.

– Couple of guys I didn’t know much about that performed well. Cal’s Daniel Lasco, who was limited because of injury this year, and Notre Dame’s C.J. Prosise. Lasco was explosive while Prosise showed soft hands out of the backfield, not surprising for a former receiver. They both ran in the high 4.4’s, too, impressive considering both are over 205 pounds. Prosise is 220.

One other thing on Prosise. It was subtle but I think he was the only back to correctly switch hands while going through the bag drill. Had it in his right hand to start, was instructed to cut left, and as he rounded the cone and burst upfield, he smoothly switched the ball into his left hand.

– Tyler Ervin was predictably fast and explosive, turning in a 4.41 and 10’10” in the broad. Caught the ball well. The latter is the same for Kenneth Dixon, two guys I pegged to do very well today.

– Almost every back ran well, it was a strong class overall, though Florida’s Kelvin Taylor didn’t have great times. He turned in a 4.6, jumped just 32 in the vert and 9’5″ in the broad, and dropped at least three passes in drills.

– Alex Collins also tested poorly. A 4.59 in the 40 and ugly 28.5 inches in the vertical, the latter amount surpassed by at least nine offensive linemen. I wrote that some were high on him and this week could get others onboard, but not with a day like this.