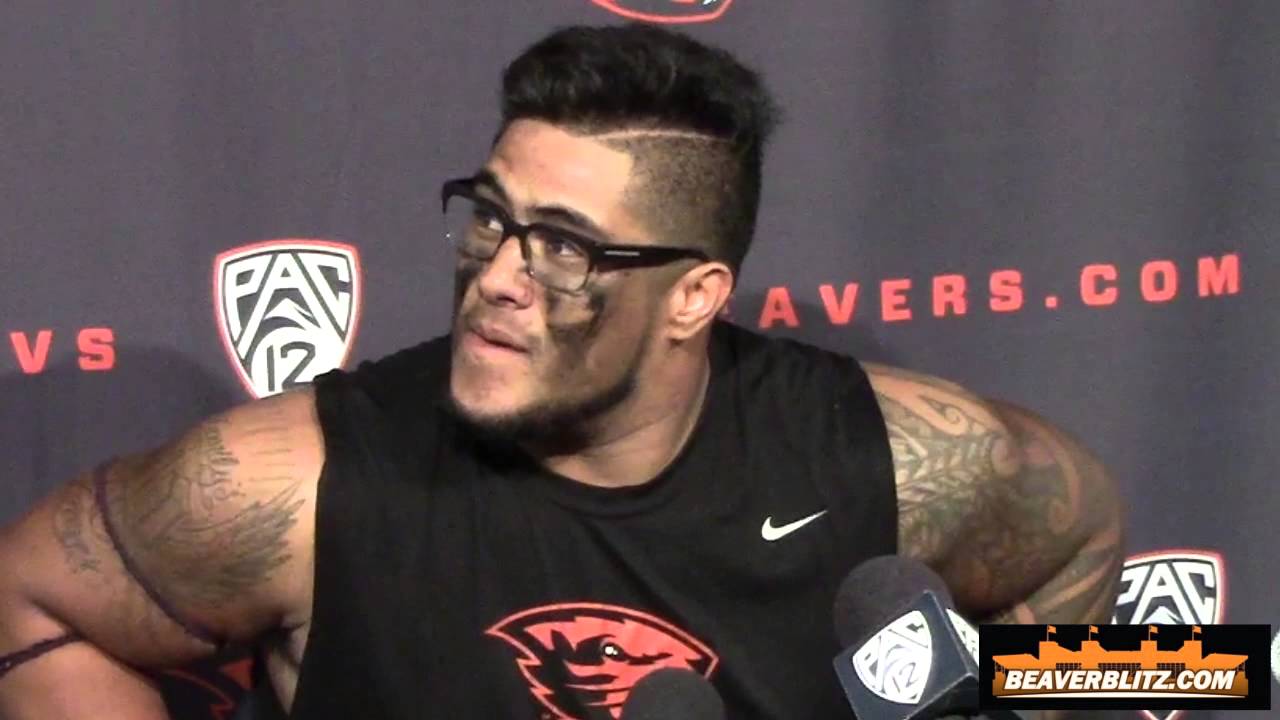 Excited to get to conduct another interview, today with Oregon State defensive tackle Kyle Peko. He’s a one-year player who is working to get his name out there, not having the exposure other players get to. Well-spoken individual who was very upfront about his backstory. He’s also talked to Pittsburgh Steelers’ scouts, and though scouts talk to everyone, I know some of you guys love hearing about that stuff.

Like Stefan McClure yesterday, look for a scouting report on Peko later in the draft process.

Again, special thanks to his agent Aaron Gordon for allowing me to have the interview.

1. Light question to start. Has it hit you yet that you’re taking the journey into the NFL. Are there nerves? Angst? Or has it not really sunk in yet.

2. Tell me a little bit about Oregon State’s defense. Switched to 3-4. Where did you play? Did they one gap, two gap, stunt, give me some background on the defense you were apart of?

My first year we were a four man front, I was a three tech. You’re right this year, we moved to a three man front and I was the nose guard. Two-gap system. But a little bit of anything really. We had a young D-line. I played nose guard and defensive end.

3. You only played for one season at the FBS level but were productive. How were you able to figure things out so quickly? Did being on scout team the year before have a big impact on that?

Definitely. Being on the scout team and going against first team line my first year there, being ineligible. I’d have to say that helped to go against our one offensive line and they got me better. Got me prepared for what to come the next season. I think that was a big step for me.

4. Take me through your college football journey. You started at a JUCO before transferring to Oregon State but forced to sit out for academic reasons.

Yeah, I didn’t take my SAT out of high school so I couldn’t go anywhere. My coaches weren’t too heavy on recruiting. They didn’t really help me out. My SAT was kind of an unknown until super late. So that’s the reason why I went to a junior college.

I went to my junior college, played two years there. Tried to go to Oregon State, they said I was short an English and a math. They recommended an online school to take and I went online, took the two classes, and transferred over. Got there in the spring, practiced spring/summer.

The day before the first game our compliance came in, called our coach, and our coach called me and said I wouldn’t be able to play the first game because OSU wasn’t going to accept the math and English class I took to transfer over.

So I got there, waiting a couple months, wasn’t told anything, until right before the season started. Over the summer, I could’ve possibly taken the English and math, the correct one. Wasn’t told what to take right, I guess. And was ruled academically ineligible. Basically, Oregon State took my offer away because I was ineligible.

My grandpa decided to pay for my school. I finished the English and the math to become eligible and so he paid for about a half-year, two quarters, and he paid for those two quarters, we got a new coaching staff. I passed the two classes, assuming I was going to be eligible. Oregon State then said I was still ineligible because now I wasn’t meeting classes towards graduation because I had only taken two credits.

So another setback. Right after that, I took two quarters and half a summer school, 16 credits each, and then I passed everything and became eligible and played my last season.

Yeah. So we got the new coaching staff. Mike Riley said if I passed the two classes I’d earn the scholarship back. I passed the two classes but the term I passed, he had left. [New head coach Gary Anderson] coming in, I didn’t’ know what was going to happen for me. Had a talk with him, and he heard my story, knew who I was, and I guess believed in me. He gave me a shot and a scholarship.

It was pretty tough. There were a lot of times I talked to my family and was like, ‘I don’t know if this is for me. Everything hasn’t been going my way.’ For my grandpa to come up and allow me to finish what I needed to get done, that was big motivation. I got married and had my first child. That was a lot of motivation to stay foused and get the job done.

7. You’re married and had a son in June of this past year. How have they changed your life and perspective?

Definitely being up there and having a girlfriend. Still young, still immature. Still hanging out with the guys. As soon as I got married and we were expecting, I wasn’t thinking about myself anymore. I was thinking about me and two other people. That definitely buckled my down and helped me stay focused.

8. You were invited to the NFLPA Bowl game. What was that experience like and is there any piece of advice you got from the coaches that stuck with you the most?

It was a really great experience for everybody who was able to participate. Very good exposure. Practice was big for everybody because all the scouts are watching and taking notes. It was a great tool for exposure especially for me because I only had that one year. I got to talk to a lot of teams which was good. All the coaching, all around, was good. They were all experienced, ex-NFL guys, that were spreading their knowledge and what they knew. It was a big key for me.

9. Did you talk to the Steelers?

Yeah, I talked to the Steelers. It’s funny because our trainer at Oregon State [Ariko Iso], she used to be a trainer for the Steelers. So he kind of made a joke about that. So I talked to him, asked a couple questions. Talked to a good amount of teams. Cardinals, Rams, and Jets stuck out. They seemed super interested. There were a number of teams that I got to talk to.

10. Your cousin Domata is obviously a well-known athlete. Has he given you any advice about what to expect throughout this process?

The last couple years he’s been a big help, putting me in the right direction. What to expect. Especially before going to Oregon State, recruiting wise, he helped me out a lot, making my decision. But right now, he shot me a couple suggestions of how to go about the game, my agent, things like that. I haven’t been talking to him too much right now. He’s still pushing me and wishing me the best. But at this point, it’s up to me. Big boy time.

11. Where are you training now? Baton Rouge?

12. How is that going? Why did you choose Louisiana, being someone on the West Coast?

It’s going good. I choose Louisiana because Pete Jenkins is an ex-NFL guy, coached for the Giants, Eagles, LSU, USC. He’s out here coaching the DL position wise. And then we got Mack Chuli and and Ryan Clark who are the trainers for the combine/pro day stuff. And they’re great people, great trainers, and we’re getting in some great work over here.

Side Bar: I talked with Kyle briefly after about training with Clark.

He’s great! He’s really been kicking out butts during training but he’s gotten us a lot better.

13. What does Pete preach the most to you?

For the next level, hands. Hands and power/speed off the ball. He preaches that everyday. He says you can’t have a job if you don’t have hands.

I’d probably say growing up here my dad used to play, he was kind of a big-time player. He always made me want to play football and be as good as him. And getting into the sport now, love the sport, love the game, love what it’s done for me so far. I’m just trying to get to that next level.