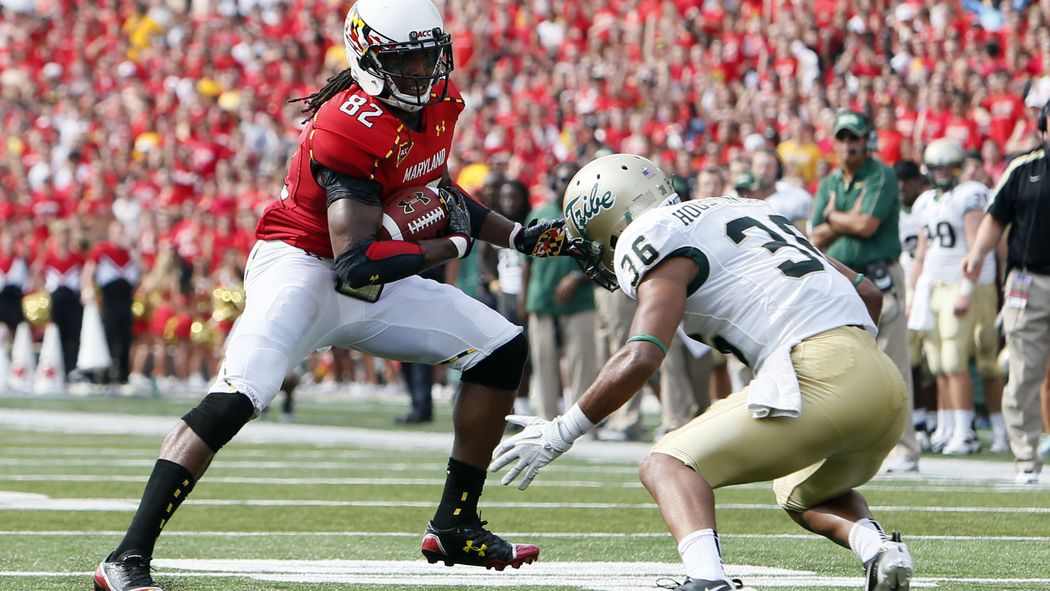 If you’re familiar with The Replacements, a cheesy but hard-not-to-love 2000 film, you know what head coach McGinty said, his team needed trailing at halftime in the final game of the regular season.

“You’ve got to have heart. Miles and miles of heart.”

Heart is all Houston-Carson wants to prove.

Senior Bowl week. It’s Tuesday, media day. I’m standing in the back of the media room with dozens of fellow media members. Cameras, light kits, reporters litter the area. A chaotic two hours. Players, fresh off an exhausting first day of weigh-ins and practice, trying to cram in a bite to eat before they begin formal interviews with teams later that night.

They’re the ones one in the spotlight but I’m the nervous wreck. It’s my first Senior Bowl, and Houston-Carson my first interview. I’m 5’6 with three pairs of socks on. He’s nearly 6’1. I’m the current embodiment of Eminem in Lose Yourself. Palms sweaty, mom’s spaghetti, you get the idea.

Listening back to my interview, I sounded like an utter buffoon. Called it the Shrine Game. Got wrong the number of blocked kicks he had in his career (nine, not five). None of it bothered him. He’s a smooth, laid-back guy, who I would see casually strolling around the media hotel later in the week. You can tell he’s been coached a little bit, responding with phrases like “that’s a good question,” but an interesting, well-spoken individual with a rockin’ beard game.

Out of William & Mary, he’s one of several small school players to be invited to the Senior Bowl. It almost felt like an FCS showcase. There’s Deiondre’ Hall from Northern Iowa. James Bradberry from Samford. Harlan Miller from Southeast Louisiana. All talented in their own right. But one facet of Houston-Carson’s game unequivocally separates him from the rest. Special teams value.

Reminiscent to the way Justin Bethel was viewed out of Presbyterian, Houston-Carson dominated football’s third phase. Nine blocks in his career. Six over the last two. That speaks to a personal knack for creating splash plays, but one that harkens back to the team’s culture.

“It’s just something our coaches really stressed at William & Mary. We don’t have as many scholarships to offer so a lot of guys have to play special teams. It’s something we pride ourselves in. We’ve had great units since I’ve been there. So I hope it gives me some sort of advantage,” he tells me in our ten minute interview.

But he isn’t just a special teams’ stalwart. He wouldn’t be here with the best seniors of his class if that was all he was. He’s a thumper, flying around the ball to the tune of 293 career tackles. He thrives on instincts and at the heart of it all, desires to bring the runner down as violently as possible.

The confidence he brings to the conversation is immediately apparent, and you can bet that carries over to the football field. But it doesn’t boil over into arrogance, a critical distinction. He’s quick to point out the areas he has to work on, especially after moving from cornerback to safety his senior year to shore up the defense’s depth chart.

“Understanding angles a little bit more. The safety position, I just made the switch from corner to safety this year. I was playing a lot on instinct this year. So just kind of understanding angles and not letting up. Sometimes I tend to be a little bit impatient and want to make plays on the ball. I just want to be in the right position and I know if I do that the big plays will come.”

In a way, the self-scouting report – and what I saw on tape – draws parallels to Mike Mitchell. Carson a little taller, lankier, but intimidating presences over the middle of the field, despite some overaggressiveness. Houston-Carson isn’t watching Mitchell on a week-to-week basis like you or I, but is familiar enough with his game to evaluate it.

“If he’s an aggressive, hit you mentality, then that’s something I like to strive for. I like watching his game. A real big dude who plays with a lot of passion and energy. Which I really enjoy watching players like that.”

Astute readers will notice he shares the same alma mater as Mike Tomlin, and the coaches’ name is still known throughout the Virginia campus.

“We have a wall of history at our school when you first walk in. There’s a full wall of the great players over the years. He has something up there, talks about being a great leader on the team. He’s also a member of my fraternity going there so in my fraternity that’s’ something we talk about as well.”

That isn’t the only geographic parallel. While he played football in Virginia, his family comes from northern Pennsylvania. A mother who went to Edinboro. And a short trip south, a father who attended Slippery Rock.

But, and don’t let this make you smash that “X” button, he didn’t grow up as a Steelers’ fan. He was a fan of that “other” local team. The Cleveland Browns.

Still with me? Can we look past that? Ok, good.

“They play hard, they have an amazing fan base,” he says, saving face for Steelers’ Nation.

Senior Bowl week is long and gone, now with a focus onto the Combine and before you know it, the draft. At the time, with two practices and a whole game on the horizon, in my nervous state, I asked the obvious. What are you looking to prove?

He paused and genuinely thought it over.

“Trying to not get too focused on proving anything to anyone else. I’ve been thinking about it recently. And the Lord already knows where I’m going to end up. He already knows the team I’m going to be with, what the next couple days are going to be like. So I’m trying to put my trust in that. That’s something He told me last night. I got everything handled. Just be yourself and play as hard as you can and the rest will take care of itself.