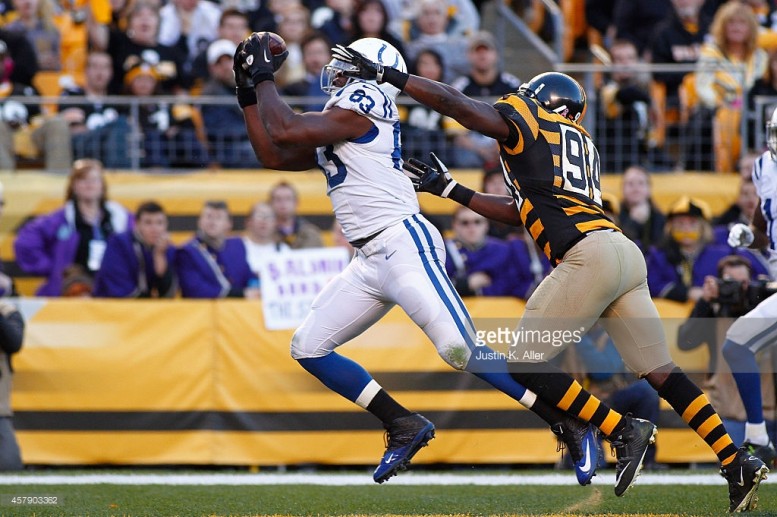 While the Pittsburgh Steelers have never been huge players in free agency, there’s a chance they might kick the tires on a few tight ends when the new league year arrives in less two weeks now that veteran Heath Miller has retired. Currently, Dwayne Allen is set to be one of the top free agent tight ends this year and he talked about his pending status Wednesday on SiriusXM NFL Radio and he had quite a few interesting things to say.

First, late in the interview, Allen talked a little about the recent retirement of Miller and how much he admired him.

“The reason why I wear 83,” said Allen of Miller. “A guy who understands the position, who’s not afraid to put his face in the fire and a guy who I model my game after. Himself, Jason Witten, those guys understand the tight end position and they go out and play it the way it’s supposed to be played. That’s all all I want to do. I want the opportunity to play the tight end position the way it’s supposed to be played.”

With the start of free agency now right around corner, Allen let it be known that he hopes to re-sign with the Indianapolis Colts. However, if he and his agent Drew Rosenhaus are unable to get a deal done with the Colts, Allen wasn’t shy about naming other teams that he wouldn’t mind playing for in 2016 and he started off by naming the Steelers.

“With Heath stepping down, Pittsburgh is a place and with the dynamic receivers that they have on the outside, they could definitely use my talents on the inside to sure up the run game and also some intermediate route running,” Allen said.

Allen didn’t stop with Pittsburgh, however, when it comes naming teams who would be good fits for him as he also believes he would fit in well with the Arizona Cardinals being as he’s already played for their head coach Bruce Arians.

“I thrived in Bruce’s system my rookie year and he allowed me to stay on the field and that’s when not only I was successful, but our team was successful also,” said Allen. “So we’ll see, it will all work out I’m sure.”

Depending on what happens with the San Diego Chargers over the course of the next few weeks as it relates to their soon-to-be free agent tight ends, Antonio Gates and Ladarius Green, Allen could very well wind up being the top available free agent at his position. Regardless, Allen figures to command at least $5 million a season on the open market and you can bet there will be quite a few teams interested in his services.

Personally, I don’t see Allen ultimately landing with the Steelers, but stranger things have happened. Being as he has a history with Arians, I can really see him signing with the Cardinals during the first few days of free agency if he doesn’t re-sign with the Colts prior to the start of the new league year.

Allen has caught 91 passes for 1,045 yards and 13 touchdowns during his first four seasons in the league with the Colts after being selected by them in the third round of the 2012 NFL Draft out of Clemson.