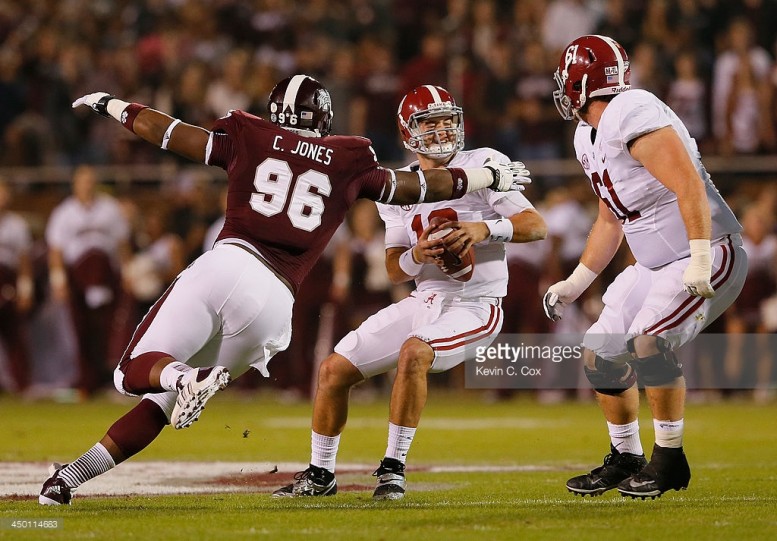 Being as the Steelers might have an interest in drafting a defensive lineman this year, today we will have a look at Mississippi State’s Chris Jones.

Jones exhibited the ability and quickness to beat guards to the gap and on this split-zone you can see that skill set in action. Unfortunately, he misses the tackle on this play which would have resulted in a loss.

Love Jones’ use of his long arms on this play and his recognition. He is able to disengage even though he gets a bit over-extended in order to take down the running back for a minimal gain.

While there is nothing wrong with Jones’ get-off and effort at the beginning of this play, he pretty much gives up after the quarterback is flushed out of the pocket. While he was unlikely to cut off the angle along the far sideline, you never know what might have happened had he chased after the football. In the three full games that I watched of Jones, I saw other instances of him not running after the football and that will need to change at the NFL level.

This is great gap integrity exhibited by Jones on this play below and as a result he’s able to split the double-team for a stop. He keeps himself square to the line of scrimmage while moving laterally. However, this is something he needs to do more consistently.

When he wants to, Jones can explode off of the line and use all of the tools in his tool bag in unison as a pass rusher. Here, he uses his arms, legs and hands in addition to a swim-over counter in order to blow up the LSU right guard.

While this a blurry replay, you can see Jones repeat the previous pass rush above on his way to beating the Arkansas right guard.

Summary: In full disclosure, I had to review Jones’ tape collection twice. Maybe it was because I turned on his game against Alabama first, but I found myself concentrating more on what he wasn’t able to do as opposed to his pluses. In short, I didn’t find his play against Alabama very fulfilling for a player with his size.

While most of the clips that I provided above focus on Jones’s strengths, he was wildly inconsistent in the three games that I watched of him. Jones has raw power but along with that he has very raw technique as both a run stopper and pass rusher. His get-off is inconsistent and at times he will come off the line too upright. I also saw him on the ground more than I would like. In addition to him not being used as an every-down player, his motor is very inconsistent and especially when it comes to chasing the football.

As a one and three-tech, Jones is an adequate run gap filler and is able to take on double-teams. Sometimes, however, he has trouble finding the ball-carrier on inside runs until it’s too late.

When it comes to the NFL, Jones will likely be appealing to 4-3 teams as an interior defensive tackle who can play over the nose in addition to between both guards. However, due to his length, weight and skill set, Jones best fit at the next level might very well be as a 3-4 defensive end who can also play inside as part of a nickel front.

In my opinion, Jones is a big lump of clay and because of that he will need a lot of coaching as a rookie before being allowed to play many snaps. I also question his conditioning level as he enters the league. Being as he shows some quickness and lateral agility on tape, it will be interesting to see how Jones performs at the combine in the drills that measure that. I suspect he’ll drop a little weight prior to arriving in Indianapolis.

As far as where Jones will be drafted, I have a late third-round grade on him and that means he might slip into the fourth round. In my opinion, he should have stayed in school one more year as he certainly could’ve used one more full season as a starter.

Games Watched: vs LSU, vs Alabama, at Arkansas